What would be the criteria for someone to be considered amongst the greatest intellectuals of all time? In the same league as Einstein, Newton, and Aristotle? Would inventing the first calculator or designing Europe’s first transportation system be enough? How about inventing the mathematical study of probability theory and decision theory? What if someone were to do all of those things and pen some of the greatest French literature ever written?

Clearly any one of these accomplishments would qualify them as one of the greats. Yet, the 17th century mathematician, philosopher, apologist, and theologian Blaise Pascal (1623-1662) is often left off the list of history’s greatest thinkers.

That has been an epic oversight.

Born in France, Pascal had anything but a conventional upbringing. With the death of his mother only a few years after his birth, Pascal’s father (Etienne) was forced to quit his lucrative job as a lawyer in order to take on his new role as sole caretaker of his family. While it’s almost certain that young Blaise would have benefited greatly from his mother’s influence, the shift in his father’s focus from his vocation to caring for his son (specifically, Pascal’s education) provided the care and nourishment needed for the seeds of genius to blossom and thrive.

Etienne’s approach to homeschooling Blaise was considered, both then and now, to be truly unique, focusing on creative, hands-on problem solving, as opposed to a traditional approach which focused more on lectures and reading. Etienne also challenged Blaise by setting the level of difficulty of his studies a notch or two above what was required for someone his age.

Being himself a trained mathematician, Etienne would regularly hold discussion groups with world class scholars (including Rene Descartes and Pierre de Fermat), who would present cutting edge ideas to the group and, in turn, receive feedback and critique. Blaise was included by his father in these discussions early on in his life and would present his first mathematics essay on conic sections to the group at age 16. It was the combination of these factors that fostered and accelerated Blaise’s intellectual growth.

Pascal’s resume is in a league of its own and would require its own book to analyze sufficiently. In order to help his father, who had been reassigned to the position of tax collector (an occupation that was extremely time consuming at this point in history), Pascal designed the first mechanical calculator. Also known as the arithmetic machine, it dramatically sped up the process.

Pascal’s innovative scientific mind also challenged and upended conventional thought in physics and probability theory. “You cannot walk ten feet in the twenty-first century without running into something that Pascal’s thirty-nine years of the seventeenth century did not affect in one way or another,” writes James A. Connor, author of Pascal’s Wager: The Man Who Played Dice With God (HarperCollins).

Night of Fire. Pascal’s upbringing, along with being highly academic, was also one of strict religious commitment. He lived a life mostly characterized by piety and devotion to God. Yet like many of those brought up in a religious household, Pascal experienced a time of “worldliness” in his late twenties, which lasted for a couple of years. Historians believe that this period in Pascal’s life was prompted by the death of his father, as well as by being apart from his two sisters (despite strong opposition from her brother, his sister Jacqueline became a nun). Somewhat depressed, Pascal indulged in a number of activities that were not consistent with his religious upbringing.

Everything changed for Pascal on the night of November 23, 1654. Not much is known as to exactly what happened due to the fact that Pascal never told anyone about the event, but what can be said is that he had a profound religious experience that not only brought an end to the worldly indulgences, but drastically changed the trajectory of his life. Historians have referred to this experience as “The Night of Fire” because of Pascal’s only written reference of the event, a piece of parchment was found sown to the inside of his coat pocket after his death:

“God of Abraham, God of Isaac, God of Jacob not of the philosophers and of the learned. Certitude. Certitude. Feeling. Joy. Peace. God of Jesus Christ. My God and your God. Your GOD will be my God. Forgetfulness of the world and of everything, except God.”

Two aspects of this note shed light on the change in Pascal’s life and his work. First, the phrase “Forgetfulness of the world and of everything, except God” explains Pascal’s motivation to put an end to a lifestyle of worldly pleasure and refocus his attention towards God. Secondly, we see that Pascal praises the God of Abraham, Isaac, and Jacob, and dismisses the god of the philosophers. Prior to this event, much of Pascal’s work had been in academia. However, after this experience, Pascal would leave most of his academic endeavors behind him and shift his focus specifically to the realms of theology and apologetics.

Heart and reason. Pascal’s theological writing reflected his understanding of the role of the heart, which he argued was foundational to humanity’s ability to reason and to assent to knowledge about God. Thus, much of Pascal’s theological and apologetic writing is focused on persuading the heart first, then the mind. It was this brand of theology that Pascal set out to defend after his recommitment to the Christian faith.

Pascal began working on a theological and apologetic treatise but unfortunately, due to the poor health that had afflicted him for the majority of his life, Pascal died before he was able to finish (at the age of 39). Pascal’s unfinished work was compiled and published two years after his death as a book titled The Pensées (or “Thoughts”), which is considered to be one of the finest works in all of French literature. 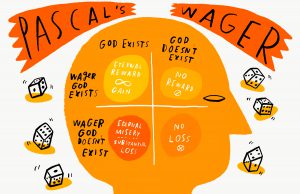 Pascal’s Wager. Pascal lays out a number of apologetic arguments for Christianity within The Pensées, but one of his primary arguments (one that is still engaged and utilized by philosophers and apologists today) is what has been called Pascal’s Wager.

The Wager is not an argument for the existence of God; rather, it is an argument that one is rationally compelled to believe in God regardless of whether or not he exists. Foundational to this argument is the mathematical reasoning known as decision theory, which one would utilize when trying to decide between competing courses of action where, ultimately, the outcome is uncertain. “God is, or God is not…. Reason cannot decide nothing here…. What will you wager?”

The illustration on page 30 portrays the basic idea of Pascal’s argument. Each box represents an outcome resulting from a given decision on the truth of a correlating state of affairs. The top left box represents the outcome if one were to wager that God exists and if God did in fact exist. Here one receives an infinite gain – namely, an eternity in heaven (not to mention a number of finite gains such as answered prayer).

The top right box represents one’s decision to wager that God exists and the possible outcomes if God did not actually exist. Traditionally the outcome assigned to this box has been a finite loss because one would have spent their time going to church, praying, tithing, etc., for seemingly no reason. (However, recent work in psychology and sociology has shown that those who believe in God tend to live happier, more fulfilled and, on average, longer lives. It is because of this that recent defenders of the Wager have argued that the outcome of the top right box should be seen as a finite gain.)

The bottom two boxes represent the possible outcomes if one were to wager that God does not exist. In the bottom left box, we see the outcome if one wagers that God does not exist and they are wrong. Pascal doesn’t mention hell as the outcome for this scenario in The Pensées. However, whatever the consequences are for wagering against God’s existence and being wrong, we can reasonably conclude, at a minimum, that this outcome is a substantial loss.

Lastly, the bottom right box shows the outcomes for wagering that God doesn’t exist and being correct. With the recent studies showing the benefits of belief in God, this box can arguably still be seen as a finite loss, even taking into account the fact that one wouldn’t waste time or resources on the church.

Based on this very basic analysis of the Wager, we can see that in all possible outcomes it is more rational to wager that God exists as opposed to not. Pascal summarizes this point: “Let us weigh the gain and the loss in wagering that God is. Let us estimate these two chances. If you gain, you gain all; if you lose, you lose nothing. Wager, then, without hesitation that He is” (Pensées, 272).

Here the word “wager,” according to Pascal, does not mean that one can force themselves into believing that God exists, rather Pascal submits that one should live the Christian life (go to church, pray, fellowship, etc.) regardless of their unbelief in hopes that they will come to believe.

As one might expect, a number of objections have been raised to Pascal’s Wager over the past 400 years. Yet, in spite of these criticisms, the Wager continues to have a number of contemporary proponents within the philosophy of religion and is still a reliable argument in the apologist’s toolbox.

Pascal’s life and achievements were truly remarkable. In only 39 years of life, this 17th century Christian thinker radically advanced both academic and religious thought, and much of his work still has a major influence in today’s society. To my fellow believers and non-believers alike, I would strongly encourage you to spend some time studying the rich work of the great Blaise Pascal. What do you have to lose?

Michael DeVito received his MA in Philosophical Apologetics from Houston Baptist University and is currently working on his MSc in Philosophy, Science and Religion at the University of Edinburgh. Prior to his academic career, Michael played nine years in the NFL with the New York Jets and the Kansas City Chiefs. He currently lives in Bangor, Maine with his wife and two sons.