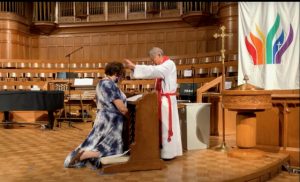 Screenshot from the “virtual” annual session of the California-Pacific Conference.

The current focus of our denomination is rightly on how to do effective ministry in the midst of a pandemic and how to understand and address racism in our nation and in our church. For most of our pastors and leaders, there is not much bandwidth left to keep abreast of denominational conflicts.

Unfortunately, the conflicts besetting the denomination have not gone away since the 2020 General Conference was postponed until 2021. Rather than honor a spirit of unity with patience before next year’s gathering in Minneapolis, where a new expression of Methodism can be launched, there are decisions made by progressive leaders that continue to sow division within our denomination regarding marriage and sexuality.

For example, at this year’s “virtual” gathering of the California-Pacific Annual Conference, the ordination service was conducted in front of an enormous “Reconciling Ministries Network” banner in the sanctuary of the First United Methodist Church of Pasadena. For those watching online, it gave the appearance that the ordination service was being conducted under the guidance of a singular advocacy caucus rather than a worldwide denomination.

In the Mountain Sky Annual Conference, clergy were invited to a “Zoom” webinar entitled: “Let’s Talk: LGBTQ+ Weddings” set for July 15 by the “United Methodist Association of Retired Clergy & Friends” (UMARC). According to the promotional material, the Rev. Harvey Martz, vice chair of the UMARC, declares, “Perhaps there is no better way to repent for past pastoral malpractice than to intentionally reach out to the LGBTQ community, acknowledging past sins, and instituting inclusive wedding policies in our local churches.”

Rather than respecting the fact that there are deeply held, Scriptural beliefs regarding same-sex unions, which are also enshrined in the Discipline as official church policy, these convictions are dismissed as “pastoral malpractice.”

The General Commission on Religion and Race (GCORR) celebrated Pride Month in June, calling upon the church to “consider the impact of intersectionality,” a “paradigm that addresses the multiple dimensions of identity and social systems as they intersect with one another and relate to inequality (such as racism, genderism, heterosexism, ageism, and classism).” The principle of intersectionality supposes that all forms of discrimination are related, and one must combat them all in order to make progress against any form of discrimination.

“Genderism” is the belief that there are two genders, male and female, not a range of “gender identities.” “Heterosexism” is the belief that heterosexuality is humankind’s God-given manner of experiencing sexual relations. Rather than being harmful discrimination, these two “isms” have been part of our Judeo-Christian understanding of marriage and sexuality for over 3,500 years. Importantly, neither the Bible nor the Church condemns persons who experience gender dysphoria or non-heterosexual attractions. It is when we act on these feelings, inclinations, or temptations that we contravene God’s will.

The primary task of GCORR is to combat racism. That is a task that all United Methodists should affirm. There is a solid basis in both the Bible and the Book of Discipline for upholding equality and fairness for all persons, regardless of race or ethnicity.

But when the agency tasked primarily with overcoming racism instead celebrates and promotes the affirmation of LGBT behavior, that agency violates church policy and forfeits much of its credibility. Both the Bible and our Book of Discipline are clear: we love and affirm every person as created in the image of God, with infinite value and worth. At the same time, we acknowledge certain behaviors as contrary to God’s will for human flourishing.

To use church funds to “promote the acceptance of homosexuality” is contrary to United Methodist policy. At the same time, it is our policy “not to reject or condemn lesbian and gay members and friends.” This is admittedly a balancing act. But in its celebration of Pride Month, GCORR comes down completely on one side of the balance. When agencies such as GCORR contravene by their actions and words the official stance of The United Methodist Church, it is no wonder that individual members and churches are reluctant to enthusiastically pay funds to support the work of the general church. This is yet another example of the general church structure ignoring the will of the church body and disregarding the authority of General Conference. 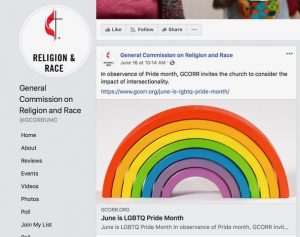 In another example of recent violations of church standards, Garrett-Evangelical Theological Seminary (Evanston, Illinois) recently announced it will bestow one of its distinguished alumni awards upon Sue Laurie. As a self-avowed lesbian, Laurie was ineligible for ordination in the UM Church. However, during the 2016 General Conference in Portland, Oregon, Laurie was “ordained” as clergy by a group of friends and colleagues. Although this “ordination” has no official standing in the church, GETS chose to recognize it in their honoring of Laurie by granting her the title “Rev.”

Since at least the 2000 General Conference, Laurie has been a leader in the disruptive demonstrations that halted the work of every conference before 2016. At the 2008 General Conference in Fort Worth, Texas, as an act of protest following the reaffirmation of the denomination’s current stance on marriage and human sexuality, Laurie and her partner, Julie Bruno, married in a sidewalk service outside the convention center.

GETS prepares dozens of clergy to serve in annual conferences of the upper Midwest. The impact such a seminary has in undermining the church’s teachings for generations cannot be underestimated. With its alumni award, GETS once again affirms its stance in opposition to United Methodist standards and policies, despite the fact that GETS receives hundreds of thousands of apportionment dollars each year from the church. This is another reason why UM members and churches are reluctant to wholeheartedly support giving funds to the general church.

Boards and agencies of the church have been flaunting the will of General Conference for years. Those of us who deal with such adverse actions day in and day out may become accustomed to this constant drumbeat of disobedience. But many United Methodists have been unaware of the blatant nature and common frequency of such actions over the years. It is the buildup of this repeated pattern of disregard for the teachings of Scripture and the decisions of the General Conference, the only body empowered to speak for the whole church, that illustrate the current impasse in our church.

Regardless of current challenges, that impasse is not going away. We remain two churches pretending to be one. Despite the wishful thinking of a few in our church, hoping this division would go away, it will not. Our deep theological differences cannot be overcome by thoughts of unity or appeals to solidarity.

During this time of waiting for the next General Conference to open a pathway to resolve our impasse, Good News and our coalition partners are diligently preparing for the founding of a new Methodist denomination that will reflect the doctrinal and moral commitments of the church through the ages and specifically our Methodist heritage.

We are part of an eternal Kingdom of God, in which there is one Ruler and Source of truth and righteousness. Earthly kingdoms and nations come and go, but the realm of our heavenly Father persists forever. As we prepare for the next iteration of Methodism, we are conscious of being part of that eternal stream. In our day and time, it is to that eternal Kingdom and its Sovereign that we seek to be faithful. If your heart is as our heart, we invite you to join us in this adventure.