For the Love of Widows and Orphans 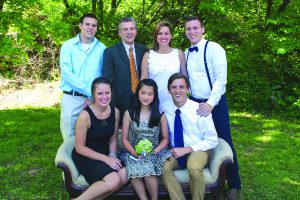 What would you spend your entire life savings on? Would you buy a house? That car you always wanted? The flow of our money generally reveals where our hearts, our passions, our desires lie. It’s an easy thing to hold onto, like a security blanket, or to toss around with gravitas like a lotto winner. For JT Olson, founder of Both Hands, a faith-based nonprofit that serves orphans and widows, a life savings was something that could be used to save a life.

One of five children, Olson grew up on a small farm in Harper’s Ferry, Iowa. Together with his parents and paternal uncle, the family farmed 380 acres of what he describes as some of the most beautiful land in the entire state. Eight people in a 1,500 square foot home might have been tight, the hours baling hay long, and a half-mile trek to the bus stop (uphill and in the snow) grueling, but Olson also remembers having a lot of fun. Not many children can claim to be allowed to drive before having a driver’s license after all, even if it was just an Oliver tractor.

Then, at the age of twelve, everything changed. On the way back home from celebrating their 16th wedding anniversary, Olson’s parents were killed in a car accident. When his brother told him the news, he simply remembers hitting the floor and crying. “You just don’t realize how much a mom and dad stabilize you,” said Olson. “It’s just one of those things you kind of count on. I know what it’s like to be an orphan, to hear those words ‘mom and dad are dead.’ To wonder what’s going to happen to us, who’s going to take care of us, or where we’re all going to go.”

Fortunately for Olson, three months before the accident his parents had made plans for their children in case anything happened. Therefore, when tragedy hit, the five siblings found a new home with their aunt and uncle, but not before the community gathered around them to help with the farm. “I remember [getting] off the bus … and there were all our neighbors in our fields with their tractors and their plows and their planters and they were planting our crops,” Olson says. “It was like all my dad’s friends were taking care of us. And I realized, this is what you do.” 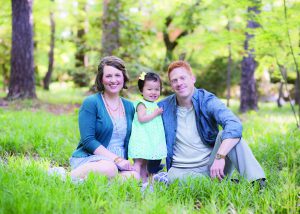 Jonathan and Amy Whitt and their adopted daughter, Emery.

That sense of community established a desire in Olson to do the same for others caught up in the midst of tragedy. While working with college students for The Southwestern Company, he witnessed how an organization called Bethany Christian Services served young women in difficult situations. When one of his students became pregnant out of wedlock, the Olsons invited her into their home and Bethany came alongside her.

“What I saw, while she was pregnant, was the way Bethany Christian Services came in and ministered to her, helped her figure it out, helped her figure out what to do, and just loved on her,” says Olson. “It’s just a great organization and they didn’t charge her a thing. So when I left Southwestern, I said if I’m going to give my life away in a volunteer position it’s going to be with Bethany.”

During his work with Bethany, Olson participated in a number of fundraisers – such as golf tournaments – to drum up support for the ministry. It wasn’t until a friend refused to donate because he was “simply golfing,” however, that he realized there might be a better way. “He took a magic marker and scribbled on my letter: ‘JT if you told me you were working on a widow’s house I might have sponsored you, but you’re just golfing’,” Olson says. “’Nice cause, but not my money.’”

This got Olson thinking, but it took hearing a friend’s adoption story to convince him to act. About three years later, a man from church named Don told him he planned to adopt four kids from Moldova, an Eastern European country and former Soviet republic, and that it would probably cost around $65,000. It was this that spurred Olson on to organize what would later become the Both Hands ministry.

In order to raise money for the adoption, Olson and more than a dozen other men mailed letters to everyone they knew asking for people to sponsor them while they worked on the home of Ms. Lucile, a widow. The donations to fix the house rolled in. “Local merchants and individuals who loved what we were doing asked how they could help,” recalled Olson. “The only thing we spent money on was stamps. We ended up raising $72,000.” 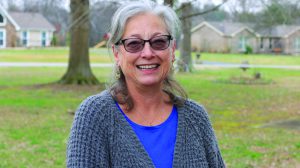 Ms. Debbie served by a Both Hands project in 2016.

This success led to more opportunities to help widows and orphans. “We started our organization in August of ‘08 and since that time we’ve done 652 projects in 42 states,” Olson says. “723 widows have been served. 793 kids are no longer orphans. And we’ve raised $7.5 million for families for adoption. And of that $7.5 million we haven’t taken anything out for our expenses. I set it up that way. We don’t take anything out. Whenever there’s a project we take out a grant.”

One of these orphans includes the Olson’s daughter, Grace. In spite of his passion for adoption, Olson was initially hesitant to do so himself. Though financially comfortable, they did have four kids of their own and had only their life savings to live on. Then, one Christmas eve, Olson had a revelation in their attic.

“All I see is car seats, strollers, cribs, and I just thought to myself, ‘We’ve got everything we need, what’s wrong with using a life savings to save a life?’,” Olson says. “And that was my watershed moment in my life that made me realizes what’s important. What burns and what doesn’t burn.”

By the next July, they received a referral for a girl from China who they planned to name Gracie. Later on they found out that Grace was, in fact, the name an orphan worker had decided to call the little girl who’d been left on their doorstep. Now, whenever people ask why they went to China for their daughter, Olson says that this was where Grace was.