Finding God in a Crisis 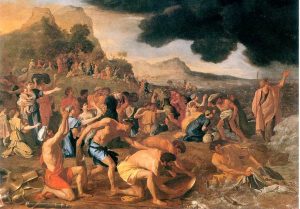 Winston Churchill is alleged to have remarked, “never waste a crisis.” It has long been said that the Chinese characters for the word “crisis” signify both danger and opportunity. If we focus too much on the danger, we can miss the opportunity that is hidden within the crisis.

The process of change and growth is most often a slow, steady process — discussed in Eugene Peterson’s book entitled A Long Obedience in the Same Direction. But this steady process is often punctuated by singular events that bring dramatic change and growth in a short time. When our grandchildren come to visit us for a week, we often note a significant jump in their vocabulary, their ability to walk, or other forms of growth. A crisis can shake up the status quo in a way that encourages change and allows new growth that would not otherwise happen.

Key events in the Bible represented crisis times that brought about dramatic change and growth. Moses and the people of Israel were trapped between the Egyptian army and the Red Sea. God parted the waters and the people began their journey as a new nation formed by the Exodus. The Philistines killed Israel’s first king, Saul, and his sons, threatening to enslave Israel once again. God anointed David as king and empowered him to lead Israel to victory over their enemies and to the greatest expansion of Israel’s borders, power, and wealth in their history. The Assyrians had captured nearly every town in Israel and surrounded Jerusalem with their mighty army. King Hezekiah prayed and God destroyed the Assyrian army by putting 185,000 men to death, perhaps by a plague.

In the New Testament, the biggest crisis of all occurred when the Son of God was humiliated and put to death on a cross outside Jerusalem. Three days later, God raised Jesus from the dead and changed human history forever. Fifty days later the Church was born on Pentecost with the gift of the Holy Spirit and the conversion of over 3,000 people.

Each of these crisis moments posed a real, existential danger to God’s people. And in each instance God intervened to bring about a miraculous turnaround that transformed God’s people and changed history.

We may be at such a crisis point right now. In fact, we are beset by a health crisis with the Coronavirus pandemic, an economic crisis with the worst downturn since the Great Depression, and a societal crisis in coming to grips with the evil of racism. Any one of these crises would be challenging enough to deal with on its own. Addressing all three crises at the same time puts us in a situation of “biblical proportions,” like the examples cited above.

We can count on the fact that God is with us in the midst of these crises. Not only that, but God is ready to act on our behalf in the midst of these crises. As Moses encouraged the Israelites on the shores of the Red Sea, “Do not be afraid. Stand firm and you will see the deliverance the Lord will bring you today. … The Lord will fight for you; you need only to be still” (Exodus 14:13-14). We can look first and foremost to what God is doing in the midst of our crisis. Through prayer we can relinquish our need to be in control and allow ourselves to rest in God’s presence and the assurance of his activity on our behalf.

But there is also a role for us to play. When God parted the waters, the people walked through the Red Sea. When God proclaimed David king, the people acknowledged his authority and the army went out to fight the enemy. When Jesus rose from death, the first disciples told the story and proclaimed God’s salvation. As Henry Blackaby (Experiencing God) puts it, we need to discern what God is doing and join him in his work.

So churches have been feeding the hungry, paying rent and utilities for people who have been laid off, and ministering to those suffering illness or grieving loss. We have been learning how to worship at a distance or online and how to maintain relationships via Zoom and phone calls. We have become vividly aware of unjust deaths and hateful prejudice in our midst and even perhaps in our own hearts.

When the crisis is past, we could just try to return to “the way things used to be.” There is a certain nostalgia and attraction for the familiar. The Israelites often longed to return to Egypt, forgetting that there was slavery. We must resist that siren call of the past.

Instead, we can incorporate what we have learned and the ways we have grown in the crisis to envision a new way to do and be church. The Rev. Tom Berlin, an influential pastor in Virginia, calls it “hybrid church.” Even when we return to doing some of the things we used to do, we can also keep doing some of the new things we have learned how to do. Regeneration Ministries in Maryland has found that by taking their ministry online, they are able to reach people across the country and around the world with the love, healing, and transformation of Jesus. Our ability to reach people can grow exponentially as we incorporate new strategies.

And we can be a church that treats one another with love and equal justice in new ways. We can learn to listen to understand, rather than simply react when people share their perspective that differs from our own. We can step back from being defensive and engage in a constructive way with the pain of people of color who have experienced racism in great and small ways. We can react positively and embrace the opportunity when the bishop wants to appoint a woman or a person of color as our pastor. We can speak up for reform of our justice system to increase accountability for law enforcement and focus on treatment and rehabilitation of nonviolent offenders, rather than locking them up in prison. Instead of continuing as a denomination that is 95 percent white in the United States, we can intentionally and aggressively seek to build ministry in the ethnic communities that will soon make up a majority of our country’s population.

The English word “crisis” comes from the Greek krisis (decision) from the Greek krinein (to decide). A crisis presents us with decisions to make. Will we hunker down and resist change and adaptation, hanging on to the way things used to be? Or, as orthodox Christians, will we embrace the opportunity to do and be the church in the new ways demanded by our changing times? Assured of God’s presence, his activity on our behalf, and his guidance, we can step out in faith to be followers of Jesus Christ in a new path.