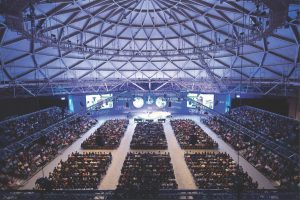 The deadline for submitting petitions to General Conference 2020 is less than three weeks away. So far, three major plans for “separation” have been released. More are in the works.

The UMC Next Plan proposes to remove all the restrictions in the Book of Discipline regarding clergy performing same-sex weddings and self-avowed practicing homosexuals being ordained as clergy. At the same time, it would provide a way for traditionalist local churches and clergy who want to maintain the current stance of our church a way to leave the denomination with their property.

The Indianapolis Plan (of which I am a member of the development team) proposes to birth two new denominations — a traditionalist church that maintains the current stance of the church and a centrist/progressive church that removes all the restrictions regarding LGBTQ marriage and ordination. Other additional “branches” could also emerge under this plan, including a progressive church that mandates same-sex marriage and LGBTQ ordination for all. The current structure of the UM Church would persist in the centrist/progressive church, although leaders of that group say they want to make significant changes in how the denomination would function. The traditionalist church and any other expression formed under this proposal would have the opportunity to write their own Book of Discipline, while borrowing whatever is helpful from the current one.

It is important to understand the big picture of what each of these plans is trying to accomplish.

The UMC Next Plan wants a United Methodist Church that continues much as it is today, but without the restrictions on LGBTQ marriage and ordination. It would force individual local churches to vote (by a 2/3 majority) to leave the UM Church if they could not abide the removal of these restrictions. It is an attempt to enact the One Church Plan, only this time with an exit for traditionalists that centrists attempted to deny in St. Louis. Essentially, it would reverse the decision made by the 2019 Special General Conference.

The Bard-Jones Plan would result in the dissolving of the denomination. The three new denominations would share some general boards and agencies, while most other agencies would continue with the centrist church. While all three could share the cross and flame, none could use the UMC name (just “Methodist”). There are some constitutional, as well as some practical, concerns as to whether this approach can work. I have written more about it here.

The Indianapolis Plan is an attempt to create a process for a relatively equal, amicable separation to take place in the UM Church. It envisions at least two, and probably more, new churches growing out of the existing UM Church. All would be legal successors of the UM Church and share in its doctrinal heritage. All could use the United Methodist name with a geographical or theological modifier (but are not required to do so). All could use a modified version of the cross and flame. Annual conferences would vote first (by majority vote) on aligning with one of the proposed denominations, minimizing the need for local churches to vote. There would be some type of division of general church assets among the new expressions.

However, the Indianapolis Plan does NOT dissolve The United Methodist Church. The centrist/progressive branch would continue to operate according to the current Discipline and carry with it most of the current structure of the church.

There are several reasons why The United Methodist Church should not be dissolved.

General Conference cannot force annual conferences to take a vote on aligning with one of the proposed expressions. Those that do not take a vote need to have a default place to land, which would most likely be the centrist/progressive church in the U.S. So it makes the most sense for this group to carry on the United Methodist structure.

There may be legal aspects that fall between the cracks. Having a continuing United Methodist Church would make it easier to care for these details after the realignment.

Many United Methodists do not want to see the church dissolve, particularly in the central conferences outside the U.S. This plan keeps the UM Church relatively intact for those who desire it.

Some have questioned why the centrist/progressive church should be the continuation of The United Methodist Church and not the traditionalist branch, since the traditionalists prevailed in the voting at the 2019 General Conference. The short answer to this question is that many traditionalists believe the current structure of the UM Church, with its many boards and agencies, has become more of a liability than an asset to the ministry of the local church. While the general church agencies do accomplish some valuable work on behalf of the denomination, there are also many instances where their efforts are ineffective or even counterproductive to the goal of making disciples of Jesus Christ. The financial resources needed to maintain a highly structured bureaucracy might be better spent in a leaner structure that would free more resources for mission and ministry locally and globally.

It is also true that nearly every general agency operates from a more progressive understanding of the church. All the agencies except one endorsed the One Church Plan. Were the agencies to be given to the traditionalist church, substantial changes in personnel and program would be needed. Many traditionalists believe our efforts would be better spent designing a new type of leaner structure better suited for the 21st century reality than trying to reform a 20th century structure that is no longer effective.

With all the efforts the Indianapolis group has made to provide for an equitable separation, it is disheartening to hear repeated criticisms that this plan is simply “dissolution” under another name. A critique by the Rev. Dr. Stan Copeland recently published by Mainstream UMC unfortunately misrepresents the Indianapolis Plan in order to attack it as a “dissolution” plan.

Copeland first blames the Indianapolis group for not revealing all the authors/endorsers of the plan. However, the list of those who worked on the plan and allowed their names to be displayed with it was shared with UM News Service and linked in the story about the release of the plan. Copeland’s charge that “it should be general knowledge by now that there was not a consensus bringing the Indy Plan to the table” is false. There was one person involved in the conversation who declined to sign off on the plan. The other 12 participants all agreed to place their names as persons who worked on the plan. Since the plan is still under development, no final endorsement was asked of any of the participants.

A question to which Copeland gives no answer is, “What does it mean to ‘dissolve’ the UM Church?” In my way of thinking, it means that The United Methodist Church ceases to exist, replaced by successor denomination(s). Under that definition, only the Bard-Jones Plan is a “dissolution plan.” Under that plan, the UM Church would have no members as of 2025.

Under the Indianapolis Plan, The United Methodist Church continues to exist under the auspices of the centrist/progressive church. The centrist/progressive church envisions significant changes to the UM Church in this scenario, including removing all the restrictions related to LGBTQ marriage and ordination, as well as perhaps adding the notion of the U.S. as its own central conference. Structural changes will be needed as well, but these will come no matter which plan is adopted, due to the departure of at least some members and the financial retrenchment taking place in the general church.

Copeland asks, “If the Indy Plan is NOT a move to dissolve the denomination, then why could not the United Methodist Church General Conference 2020 simply birth a new expression — a Traditionalist United Methodist Church?” This question illustrates the difference between leaving and separating. In leaving, there are winners and losers, those who stay and those who go. In separating, all parties are treated as equally as possible. No one party has the advantage. The goal of the Indianapolis Plan, as well as the desire of Good News and the Renewal and Reform Coalition, has been to find a way forward that treats all groups equally and has no winners or losers. Otherwise, we might as well just continue the fight that was begun in St. Louis. To move past the fight, we need to move past the win/lose dichotomy to a fair and equitable separation.

Copeland then asks, “If this is NOT dissolution then why cannot the Centrist/Progressive branch that would be the ‘legal’ continuation and be responsible for the boards and agencies be The United Methodist Church?” The Indianapolis Plan envisions all successor groups being able (but not required) to use the name “United Methodist” with a modifier to distinguish one group from another. Some United Methodists care deeply about keeping the name, while others do not. One group that is deeply committed to keeping the “United Methodist” name is the church in Africa. However, African delegates and leaders have told us repeatedly they could not remain in a church that allows same-sex marriage and LGBTQ ordination. Copeland’s plan (and the UMC Next Plan) would force the Africans to choose between keeping the name and being faithful to their theological principles. To choose the latter would impose great difficulties on their churches in countries where freedom of religion is not always allowed by law or practice. It is mainly for their sake that we have consistently advocated for all groups to have access to the name. After all, all groups are equally historical successors to The United Methodist Church.

When the early ideas behind the Indianapolis Plan were first being informally circulated for feedback from various constituencies, our group heard from some centrists that they thought the plan was a form of dissolution. That is why we chose to specifically add a provision that stipulates that The United Methodist Church is not dissolving, but continuing structurally under the auspices of the centrist/progressive church. Now we are faced with an accusation from Copeland, “It’s been my experience that when persons or groups go out of their way to say what something ‘is not’ it usually IS at least a version of what is being denied.” Apparently, we are being criticized by some centrists for not clarifying what our plan does, while at the same time being criticized by other centrists for trying to offer the desired clarity. It makes one wonder whether this “critique” is a good faith effort or merely an attempt to misrepresent and slander a plan that is different from the one many centrists want to put forward — a plan to drive traditionalists out of The United Methodist Church.