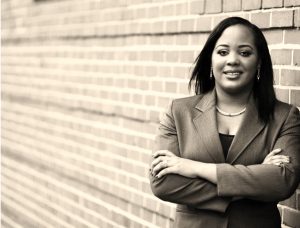 Krystl D. Gauld was one of the featured speakers at the 2021 Global Gathering of the Wesleyan Covenant Association.

One day at about three in the afternoon he had a vision. He distinctly saw an angel of God, who came to him and said, “Cornelius!”

Cornelius stared at him in fear. “What is it, Lord?” he asked.

The angel answered, “Your prayers and gifts to the poor have come up as a memorial offering before God. Now send men to Joppa to bring back a man named Simon who is called Peter” (Acts 10:3-5).

According to Google, “audacious” means showing a willingness to take surprisingly bold risks. Merriam-Webster deems it an adjective, describing a person as intrepidly daring, adventurous, recklessly bold, and contemptuous to laws and decorum. But Luke, the author of the book of Acts, shows us what it means to be audacious.

It begins with the humble yet bold question of a Gentile: “What do you want, Lord?” And it leads to a breakthrough response that ushers in the opportunity for Jews to freely proclaim the gospel of Jesus Christ to all people of every culture, faith, and demographic.

In Acts 10, we meet Cornelius. The Bible tells us that he was a devout, God-fearing man, as was everyone in his household; but his pious lifestyle wasn’t enough. All of the good deeds he found in his heart to do could not buy him forgiveness and eternal life. It could not beget his freedom in Christ or bring him a forged relationship between him and the Father. Still, by way of messenger, God visits Cornelius in his home and enters in.

Luke also tells a similar story about Jesus and the centurion. Like Cornelius, the man was also a Roman military leader. “Lord, don’t trouble yourself,” the unnamed centurion tells Jesus by way of messengers, “For I do not deserve to have you come under my roof” (Luke 7:6). He says this, even to Jesus, because he knew that Jews didn’t visit the homes of people from other races. What if all of your life you were taught – through tales and practices, traditions and past events – that there was a group of people, a race, or a nation that was better than you and everybody else?

It was no secret. People of other nations understood very well that Jews were God’s chosen people, his favorites. It was widely believed that the Lord was on their side and only their side. It was also believed that certain people – Gentile people – weren’t good enough.

This created an international divide between Jews and non-Jews. It was believed that there were deserving and undeserving groups of people. Us versus them. The chosen versus the inferior. The favored versus the unseen. Those considered clean versus those who were so dirty that there was no cure for their human condition. Yet, at this moment, an angel crosses an interracial threshold to visit this Gentile in his home and calls out to him, “Cornelius!”

With confidence, we can shout out to the world, “God knows your name. You are not a bother. You are our brothers and sisters. You are not an afterthought. You are on God’s mind.”

With God no one is unreachable. No one is too dirty. No one is unredeemable. God is calling out to those people. He is saying, They may be different, but they are not less than. They are still worthy enough and worth dying for.

God accepts anyone who fears him and wants to do what is right. For any non-believer, foreigner, or stranger willing to turn away from sin and towards Christ, our response should be, “Here I am, Lord, send me to them. You want them reconciled: I am going in.”

What is it that you want, Lord? Some translations describe this as a frightening experience. Yet, Cornelius pushes past his fear and musters the audacity to ask, “What do you want, sir?” An angel responds: “Your prayers and gifts to the poor have come up as a memorial offering before God.” How meaningful it must’ve been for Cornelius to know that the God of the Jews was looking down on his gifts and his offerings.

The author makes it a point to tell us that Cornelius was a captain in the Italian regiment. He was a Roman. That means he was an enemy. Between the Jews and the Romans, there was a deep-rooted history of discord and animosity. By birth, Cornelius was a part of the group of people that had oppressed, mistreated, and persecuted Israel. About fifteen years prior, they participated in a hostile killing of the King of the Jews: our Jesus.

While Greeks, Romans, Jews, and several other people groups lived and mixed, it was only in a functional way. They were not friends. There was underlying hurt and ill sentiments among the nations. Yet, it’s almost as if God tells Cornelius, I see you, Gentile, seeking after me and you are going to find me. You let me in and now I am going to let you in.

God is still the redeemer, even of the Gentiles. The Son is still the man that enters neighborhoods to tell excluded women that he’s seen everything they’ve ever done. Jesus is still asking the lamest of folk, don’t you want to be healed? The Holy Spirit is still converting thousands, reaching the captives, and even our captors.

His spirit is still communicating the Father’s vision to his followers. It’s a vision not for ourselves to create a church that will solely separate us from those who want to compromise Scripture and the faith. But it is a vision that empowers us to “go with the gospel” into places where people who perceive themselves to be our enemies because they are still at odds with God.

We are to come out of our silos of safety and comfortability to permit access to our small groups and sanctuaries. We are to partake in fellowship with those who may have never been our friends before, those that are deviants, considered deplorable, disgusting, scary, and even dirty.

Our faith is about more than a group of people recognizing that God does not favor one nation, one race, or one group of people over another. It is so much bigger than Christ’s church cultivating the courage to love our contenders. It is about Jesus reminding us that he died for all – his friends and his enemies.

This is what the Lord tells Cornelius that he wants: “Send men to Joppa,” the angel says in verse 5, “to bring back a man named Simon who is called Peter.”

Peter and Cornelius were on opposite sides of warring races. Still, God summons an audacity within Cornelius. He invites Peter, a Jewish person, to come into his home as if he were his next-door neighbor. This is culturally inappropriate, this is socially scandalous, this is even dangerous. However, this conversation reveals God’s vision for the church.

God is communicating his vision to Cornelius in a language that he would understand, the crossing over into territories, strategically beyond enemy lines, to extend kingdoms by evangelizing people.

God later speaks to Peter in a form that he would understand, hunger. Peter is up on a rooftop to pray. It was about noon, lunchtime, the next day. As Peter is praying, his stomach probably starts to rumble. For Peter, what looked to be a huge blanket contained a feast – an overwhelming presence of every kind of animal, reptile, and bird you could think of (Acts 10:11). God nudges a hungry Peter, to go, kill, and eat.

Yet, Peter objects. The Bible tells us that three times, Peter rejects what the Lord is offering. It was not aligned with tradition, and he was not going to cross that line. Peter did not realize it was God’s broadest and most vibrant vision for the church. He didn’t know that it wasn’t about food but it was about all kinds of people.

God is speaking to his church today in a language we understand: Renewal. Newness. A new and renewed Global Methodist Church. Even still, it is about evangelizing people. Every kind of person. Strategically and practically, that means we are going to have to cross our perceived enemy lines. God is revealing to us our future as a Global Methodist Church. He is showing what he wants. And it should stretch us. It should puzzle us. It should even scare us. It should make us want to say “no,” but through the providence, power, prompting, and pushing of God’s spirit, we can give birth to this new and radical disciple-making movement God has planned for us.

It won’t be about traditions and legalisms that create cultural divides and fortify enemy lines. It will be about how Jesus crossed those lines so that the dead could come alive. It will be about how when sin separated us from God, and lines were drawn between us and them, God took it upon himself to cross it: from heaven, Jesus crossed over into earth becoming fully man, while still divine, to carry the fault of our sin. We were at odds as sinners – doomed, dirty, due death, and destined for hell. And he was perfect, absolutely righteous.

He wanted to make things right with us. He carried an old rugged cross to the mount that he was willing to die on for us. He suffered for our transgressions so that truly, today, we can be with him in paradise. It will be a movement about Jesus; how he then went across the true enemy’s threshold into hell, snatching back the keys of death, damnation, and the grave. So that we could be set free from the slavery of our sin, so that we can be found blameless just as he is blameless, and so that we could be made well. It will be about how his resurrected life crossed out condemnation, crossed out a dire debt that we owed that we could never repay.

It crossed out the suffering and sin of those of us that have turned to him. And now we, too, can cross lines that will push back death in parts of the world where people are still hurting, sick, despondent, and in despair. For Jesus, he is our crossover king, our Passover lamb, and the undefeatable cure for our human condition.

Krystl D. Gauld is the Executive Director at Dignity Housing in Philadelphia, Pennsylvania. An advocate, student, and young adult leader in the church, she is currently working on a Doctor of Theology degree at Evangelical Seminary in Myerstown, Pennsylvania. The Eastern Pennsylvania Annual Conference has twice elected her to serve as a General Conference delegate. Newly married, Krystl lives with her husband Damian Gauld in Upper Darby, Pennsylvania. This article is adapted from her address at the Wesleyan Covenant Association’s Global Gathering in April.