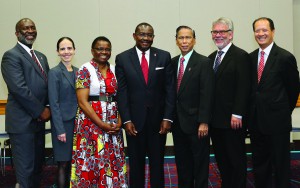 In the aftermath of General Conference, Annual Conferences, and Jurisdictional Conferences that exhibited the conflict between progressive and traditionalist perspectives, the focus of attention now shifts to the upcoming meeting of the Judicial Council. Some of the recent actions taken by annual and jurisdictional conferences are being appealed to the Council, which is the only body in the church that can overturn a conference’s action.

The Judicial Council is the equivalent of our denomination’s “Supreme Court.” It is the final authority on church law and legal processes and is able to review actions taken by the various conferences. In order for the Judicial Council to review an action, either the conference has to vote to ask the Council for a declaratory decision or an individual needs to pose a question of law that relates to the action in question.

Three questions of law are being considered by the October meeting of the Judicial Council relating to actions of three annual conferences.

Two of the questions relate to whether an annual conference may ordain or commission a self-avowed practicing homosexual for ministry within The United Methodist Church. Both the New York and Northern Illinois Annual Conferences announced that their boards of ordained ministry would disregard the issue of one’s sexual orientation or practice when considering whether the person is qualified for commissioning or ordination in the church. The New York Annual Conference went on to commission or ordain four persons who had earlier signed a statement acknowledging that they are homosexuals. The New York board of ordained ministry refused to give assurances that the four persons in question were “celibate in singleness” and thus qualified for ministry. The questions of law asked whether these boards of ordained ministry policies were legal under the Book of Discipline.

Both Bishop Sally Dyck of Northern Illinois and Bishop Jane Middleton, acting bishop of New York, ruled that the questions of law were improper and therefore did not need to be answered. Bishop Middleton made the novel argument that bishops cannot interfere with the functioning of an annual conference board or agency, even though the bishop is charged with upholding the Discipline and “ensur[ing] that the annual conference and general church policies and procedures are followed” (Discipline ¶ 415.2).

Both of these decisions are part of an increasing trend by bishops to try to avoid ruling on any question of law by arguing that it is “moot and hypothetical.” That is fancy legal language for a question that does not deal with a real factual situation. Judges (bishops) and courts (Judicial Council) are only supposed to rule on real cases because they have to consider the facts and circumstances of each case. However, the definition of “moot and hypothetical” has been so stretched over time that bishops and the Judicial Council are now routinely avoiding rulings on real situations that impact the whole church.

Significantly, the persons who posed the questions of law in these two cases are arguing that the whole notion that “moot and hypothetical questions should not be ruled on” no longer applies under church law and should be thrown out.

The rule against “moot and hypothetical” questions dates back to 1946 and is based on explicit wording in the 1944 Book of Discipline of the former Methodist Church that outlawed the Judicial Council from ruling on a moot or hypothetical declaratory decision (1944 Discipline ¶ 914). The Judicial Council itself extended this prohibition to questions of law (judicial activism, anyone?). Ever since, this rule has become more deeply entrenched in church law.

The only problem with this is that the prohibition against “moot and hypothetical” questions was taken out of the Book of Discipline in 1952, when the current language of the Discipline was adopted. Therefore, the basis for the Judicial Council’s rule against “moot and hypothetical” questions was removed, and the rule should no longer apply. The 2012 Discipline provides that “The decisions of the Judicial Council of The Methodist Church heretofore issued shall have the same authority in The United Methodist Church as they had in The Methodist Church, persuasive as precedents, except where their basis has been changed by the terms of the Plan of Union or other revisions of Church law” (¶ 2611, emphasis added).

The Judicial Council is being asked to nullify a rule that has been improperly used for over 60 years. The Council will then hopefully rule that the two bishops must in fact rule on the questions of law, as asked. Unfortunately, this will delay a final resolution of these cases until the Judicial Council reviews them again in spring of 2017.

The other important question of law concerns a resolution passed by the New England Annual Conference stating that it would “not conform or comply with provisions of the Discipline which discriminate against LGBTQIA persons.” New England was one of five annual conferences that passed a resolution of “non-conformity” to the Book of Discipline. This action was challenged by a question of law.

In response, Bishop Sudarshana Devadhar has ruled that the resolution is “in violation of the Discipline.” That ruling was consistent with many earlier Judicial Council decisions that held that “annual conferences may not legally negate, ignore, or violate provisions of the Discipline with which they disagree, even when the disagreements are based upon conscientious objections to those provisions.” Bishop Devadhar acknowledged that his ruling was “a painful one to make.” He explained that, “as a United Methodist Bishop, I cannot challenge what I believe to be an unjust law by approving an illegal law.” Although not supportive of United Methodist teaching on marriage and human sexuality, Devadhar acted with integrity in this instance.

The Judicial Council will automatically review this ruling and hopefully affirm it.

Other significant actions from this summer’s jurisdictional conferences have yet to be heard by the Judicial Council. These actions took place after the deadline for scheduling matters to come before this October’s session of the Council. Instead, they will be considered at the Council’s spring session in April.

The Northeastern Jurisdictional Conference passed a resolution that urged its annual conferences not to comply with provisions of the Discipline dealing with LGBTQIA persons. The resolution invited annual conferences not to allocate money for complaints, investigations, or trials to enforce the Discipline, nor to take part in such accountability processes. Bishop Mark Webb responded to a question of law by ruling the resolution null and void, as a violation of the Discipline. The Judicial Council will automatically review this ruling and hopefully affirm it.

The most widely watched case involves a request by the South Central Jurisdictional Conference for a declaratory decision as to whether it is legal for a jurisdictional conference to elect a self-avowed practicing homosexual as a bishop. While this request for a declaratory decision is not directly related to the election of Karen Oliveto as a bishop in the Western Jurisdiction, the ruling of the Judicial Council on this request will have implications for her election. Despite a request from the Council of Bishops and others for the Judicial Council to expedite a ruling on this request by considering it at its October session, the Council declined to do so.

All of the cases described in this article highlight the importance of the Judicial Council as a means of accountability within the church. It is charged with the responsibility of ensuring that the church’s actions and processes conform to the requirements of the church constitution and general church policies.

However, compliance with Judicial Council decisions is voluntary. There is no such thing as a United Methodist police force to enforce the Council’s decisions. One must ask whether persons who have already demonstrated a commitment to disregard or disobey the Book of Discipline will turn around and voluntarily comply with the Judicial Council’s decisions. The unity and integrity of The United Methodist Church depend upon it.