Closer to a Way Forward 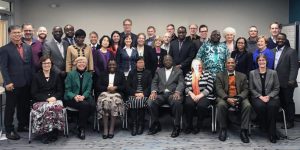 Members of the Commission on a Way Forward, UMNS

Last week the Bishops’ Commission on a Way Forward for the Church held its fourth face-to-face meeting. With nine total meetings scheduled, we are still not even halfway to the end of our process. We are aware that this process is taking more time and thought than some would like. It is not easy work.

The Commission is not trying to determine what the church should believe regarding sexual practice and marriage. We are concentrating on how we can and cannot live together. So time has not been spent on theological debate or trying to persuade others to change their position. We’ve done that for four decades, and going over the rationales for each position is unlikely to change anyone’s mind or create any kind of resolution.

The focus of this meeting was to solidify the foundation for a proposal by 1) coming to agreement about what we have in common as United Methodists, 2) summarizing what we have been hearing and learning from various parts of the church, and 3) identifying guiding principles for a way forward.

We agreed on what forms our common core, the shared understanding of the Christian faith that helps describe our identity as United Methodists. We share a common desire to root our theology and actions in Scripture, even while we have sharp disagreements over how to interpret and apply the Bible to life. We share a Wesleyan theological heritage founded on:

A key part of our identity that we are recovering is small group accountability and support. The class and band meetings of 18th century England have given way to modern spiritual formation groups, support groups, and accountability groups. We strongly believe in a life of Christian discipleship characterized by works of piety, mercy, and justice. Common liturgy, such as services of Baptism and Eucharist, link us together. And our church features bishops, an itinerant clergy to extend the mission of the church, and conferencing as our way of decision-making.

Of course, it is important to note that evangelicals, centrists, and progressives do not understand our core the same way. Differences of interpretation and application might mean that the core does not really unite us, but only serves as a starting point for development in separate directions.

What We Are Learning

We have received and processed significant feedback from North American caucus groups, general church agencies, seminary students, young adults, large church pastors, and United Methodist theologians and historians, among others. While this feedback has been helpful in understanding the issues and concerns that people bring to this conflict, the solutions people have proposed are in many ways contradictory and one-sided. As we narrow in on a proposal, we will need to try to accommodate the interests and concerns of all sections of the church, while knowing that we cannot fulfill anyone’s expectations completely. The ultimate proposal will be a compromise and blending of ideas and suggestions.

One major emphasis of this meeting was a deeper understanding of the distinct circumstances in the central conferences outside the United States. It is important to understand where these United Methodist brothers and sisters stand on the issues that divide us. But it is also important to understand their local situations. There are many countries in Africa and Eastern Europe that not only do not allow same-sex marriage, but actually have laws against homosexuality. Many of the European congregations and annual conferences are small and financially precarious.

Another segment during this meeting revolved around a greater understanding of our church pension situation. Some annual conferences have considerable unfunded liability for pensions earned by clergy prior to 1982. And as clergy and spouses live longer lives, that liability increases. Any proposal the Commission makes will have to address how that liability is cared for.

Principles for a Way Forward

We are looking for a way forward that provides enough separation between the disagreeing parts of the church, so that no one is forced to support a type of ministry that he or she cannot in good conscience believe in. Given the events that have transpired since General Conference 2016, the amount of needed separation is probably greater now than it was then. I am hoping for a solution where those who can live together are able to do so, while those who cannot live together are not forced to do so.

I am gratified that the Commission has begun sketching the outlines of a proposed way forward. The next several months will be crucial in helping us arrive at a way to resolve the impasse in our denomination. The outlines will rapidly become clearer, and the details will start to fill in.

A Heart of Peace

Some have complained that the Commission’s meetings are not open 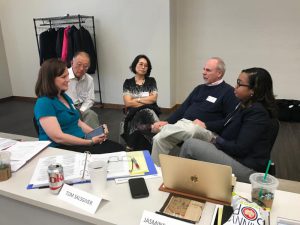 to the press or public. While I am a proponent of open meetings in most circumstances, I firmly believe we on the Commission could not have accomplished what we have so far if the meetings had been open. (Full disclosure: my colleagues who work most closely with Good News magazine disagree with me and believe the meetings should be open.) The need to worry about how one comes across in a polarized church and society would stifle creativity and the ability to “try on” ideas. Because of the trust and goodwill we have toward one another within our group of 32 members, we are able to say things that we might not have said in a public venue, and we can work through a messy process toward a clear solution. I along with many Commission members look forward to sharing publicly as much information as we can as soon as we can in this process.

We are grateful for, encouraged by, and dependent upon the prayers of United Methodists around the globe. As we on the Commission do our work, we are constantly admonished to engage with one another with “a heart of peace.” I am hopeful that this same attitude of humility, peace, and love will characterize not only the deliberations of the Commission, but all the blogs and discussions and meetings that will help the church process our recommendations. Finding a positive and God-honoring way forward for our church depends on it.

“Do nothing out of selfish ambition or vain conceit, but in humility consider others better than yourselves. Each of you should look not only to your own interests, but also to the interests of others” (Philippians 2:3-4).

I encourage you to read the more detailed report issued by the Commission this week that can be found here.

Thomas Lambrecht is a United Methodist clergy person and the vice- president of Good News. He serves as a member of the Bishops’ Commission on a Way Forward.