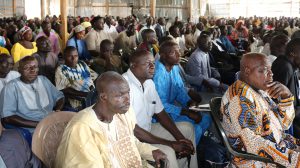 By the Rev. Ande I. Emmanuel –

By the year 2030, The United Methodist Church in Nigeria expects to have more than 2 million professing members. Over the past 10 years, the Nigeria Episcopal Area witnessed a 15 percent increase annually in church membership, and that trend is likely to continue, say United Methodist leaders.

The increase, said the Rev. Samuel Sule, director of evangelism and discipleship, “has brought the total statistics (to) 742,652 professing members and 900 churches of The United Methodist Church in Nigeria.

“With the current population growth in the country and the renewed interest in our board,” he said, “we are envisioning 18 percent annual growth rate in Nigeria between now and 2030.”

At that rate, said the Rev. Denis Obadiah, Taraba West District superintendent, “by 2030, we are going to have 2,079,425 professing members.”

The Nigeria Area Board of Discipleship and Evangelism recently offered evangelism and leadership training to help the church strategize for the next dozen years. From 1984 to 2018, the church maintained a steady membership growth of more than 15 percent annually. During this time, The United Methodist Church in Nigeria expanded from one Muri Provisional Conference to four annual conferences, from 28 to 785 pastors, from 15 districts and 180 charges to 52 districts and 900 charges with about 162 preaching centers, and from 145,000 members to 742,652 professing members.

The episcopal area’s current membership number is considerably higher than what was reported to the General Council on Finance and Administration, the denomination’s finance agency, in 2016. According to the episcopal office, the Northern Nigeria Conference was underreported at that time, and that report included only three of the four annual conferences — the North East Nigeria Conference wasn’t established until 2016.

Situated on the western coast of Africa, Nigeria shares land borders with the Republic of Benin in the west, Chad and Cameroon in the east, and Niger in the north. Its coast lies on the Gulf of Guinea in the south and borders Lake Chad to the northeast. According to the United Nations, Nigeria’s population exceeds 197 million, with a median age of 17.9 years.

“The current population growth in Nigeria is serving as a clarion call for The United Methodist Church … and its international partners to use this opportunity by coming up with plans that will boost the growth of United Methodism in Nigeria by 2030,” said Elizabeth Anthony, youth president of the Taraba Central District, who participated in the evangelism training.

“Nigeria is a country with 36 states, plus the Federal Capital Territory,” noted Rimande Garba, a lay leader in Magami/Jalingo. More than 70 percent of the United Methodists in Nigeria live in the northeast, he said, “making the remaining parts of the country a potential ground for the growth of the church.” Possible international areas of growth, he added, include Chad, Niger, and Cameroon republics.

The Rev. Gloria Iliya Dogara, district superintendent of the Jalingo District, said the revived interest of young people in the church is signaling a bright future for United Methodism in Nigeria. “The United Methodist Church in Nigeria is living out its mission: to raise faithful and fruitful disciples of Jesus Christ who are passionate to transform the world through preaching, teaching, and providing services that meet physical and spiritual needs.”