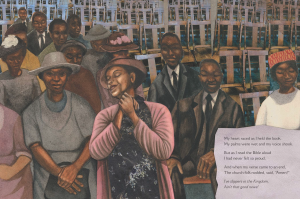 Art from the book By and By: Charles Albert Tindley, The Father of Gospel Music, written by Carole Boston Weatherford and illustrated by Bryan Collier. Image: Simon & Shuster.

Disbelief is the most satisfying response Carole Boston Weatherford gets from children about her books featuring notable African Americans.

“Kids just can’t believe that our nation allowed those kinds of injustices to visit upon so many people,” said Weatherford, a poet who has written children’s books on Fannie Lou Hamer, Harriet Tubman, Lena Horne, and others.

“I want them to be appalled,” she said. “I want them to be shocked that (slavery and racial discrimination) happened, but I also want them to be inspired that my subjects overcame those injustices … and persisted in reaching their potential and in making contributions to their communities and to larger society.”

“There were hardly any,” she said. “But when I became a mother, I noticed that there were more books that featured children of color for them.”

Her latest subject is Charles A. Tindley, a Methodist Episcopal clergyman sometimes called “The Prince of Preachers” and one of the founding fathers of gospel music. He was pastor of East Calvary Methodist Church in Philadelphia — now named Tindley Temple United Methodist Church — from 1902 to 1933.

His hymn, “I’ll Overcome Someday,” was one of the roots of the civil rights anthem “We Shall Overcome.” He wrote other gospel music standards, such as “(Take Your Burden to the Lord and) Leave It There,” “Stand by Me” and “What Are They Doing in Heaven?”

Tindley, born in 1851 the child of a slave father and a free mother who died young, received no formal schooling as a child — instead being hired out as a field hand. He taught himself to read from newspaper clippings lit by glowing pine knots.

Pursuing whatever education he could afford — night schools and correspondence courses, mostly — while working to support himself, he relocated to Philadelphia with his wife, Daisy, and worked as a church custodian. From there, he progressed to being the pastor of the very same church and writing many memorable gospel songs.

In By and By: Charles Albert Tindley, The Father of Gospel Music, illustrated by Bryan Collier, Tindley’s rather incredible rise is told in lilting verse by Weatherford.

“My life is a sermon inside a song/I’ll sing it for you/Won’t take long,” the book opens.

“I think Tindley is a testimony to endurance and aspiration,” Collier said. “His insatiable need to learn and read, you can see that theme through a lot of different people like Frederick Douglass and many others growing up in the era of America that he grew up in, when the odds were totally against them to do what he did.”

Collier said his illustration style is influenced by his grandmother, who made quilts when he was a kid. “That’s the collage aspect of it. I try to use earth tones and bright colors for juxtaposition to make it pop. I use family members and friends to pose for the book, so we see ourselves and they can see themselves in books.”

Collier used to play as a child in an abandoned Pocomoke City, Maryland, church named for Tindley. It has since been torn down. Tindley was born in Berlin, Maryland, about 30 miles north of Pocomoke City.

“Every year, they do Tindley Day in Maryland as well as in Philadelphia,” he said. “So I had known about it and had been at the celebration picnics on Tindley Day.”

Collier has projects coming up about a mother’s writing directed to her unborn son and a reinterpretation of Robert Frost’s “The Road Not Taken.”

Weatherford is working on a book about Henry Box Brown, who in 1849 mailed himself in a wooden box from Richmond, Virginia, to Philadelphia to escape slavery.

No matter how much historical context Weatherford shares when addressing children about her books, she says many are “confused” and ask the same questions:

“Did it really happen?”

“Who made those stupid rules?”

“Why did white people treat black people so badly?”

“They’re constantly trying to figure out how they should respond to history and also to injustices they see in their own lives,” she said. “Bullying in school, how do I respond to that? So kids are learning to navigate situations and they are forming their own values.

“I do hope that my books play some role in shaping their values and helps them form their own system of justice.”