Called Into His Mission 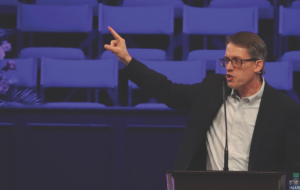 Then the eleven disciples went to Galilee, to the mountain where Jesus had told them to go. When they saw him, they worshiped him; but some doubted. Then Jesus came to them and said, “All authority in heaven and on earth has been given to me. Therefore go and make disciples of all nations, baptizing them in the name of the Father and of the Son and of the Holy Spirit, and teaching them to obey everything I have commanded you. And surely I am with you always, to the very end of the age” (Matthew 28:16-20).

The The Wesleyan Covenant Association is to be commended for the vital role it has played in this long struggle to restore historic orthodoxy and Wesleyan affinity to our beloved church. We also cannot forget the long-standing role of Good News and the Confessing Movement, as well as movements such as the Memphis Declaration and the Houston Declaration. For decades, so many have joined this long and tortuous struggle, but a new future is dawning.

The General Conference may have been delayed yet again but you cannot delay God’s work in the people called Methodist. As we prepare for this new movement, let us not forget to stand firm in our commitment to the authority of God’s word, the supremacy of Christ, the great message of sanctification, discipleship, and a global mission to the ends of the earth.

It’s in the remembering of this great theme that Methodism is a missional force that led Francis Asbury to ride 275,000 miles on horseback in our opening days. We are to call and lead people to God, going all the way back to the Great Commission of our Lord Jesus Christ. And whether it be evangelism or planting churches or establishing new global relationships, we have a mission to join with God’s mission in the world.

There was a time when we conceptualized North America as being the center of the world Christian movement, but today it is the fastest growing mission field in the world. We have to think differently about what it means to give birth in a mission field.

All across the world so many of our WCA partners are in the midst of one of the most vibrant movements of God in the history of world. And we get to join God in that mission of Christ to the ends of the earth.

“All authority in heaven and on earth has been given to me,” Jesus said (Matthew 28:18). He is the one who holds all authority and power. We are the people of a risen Lord.

The world has seen countless leaders throughout history from Nebuchadnezzar to Joan of Arc, Alexander the Great to Abraham Lincoln. Many leaders have led great movements, fought great fights, dreamed great dreams, thought great thoughts, but no one has proved more powerful than the grave.

We sometimes forget the radical nature of the question that the angels asked the women who arrived at the tomb. “Why do you seek the living amongst the dead?” It’s a reminder to us of a very important point that we are the people of the risen Lord. What is the implication of that question?

This is what reverberates from the empty tomb to where we are today. We are not waiting for the Council of Bishops to meet and vote on something. We are not waiting on the Protocol. We have already been called into his mission. We’re already the people of the risen Lord. Paul says, “If Christ has not been raised, our preaching is useless and so is your faith” (1 Corinthians 15:14).

There is no Global Methodist Church unless Christ is the risen Lord. There is not a future for us. We might as well go home if Christ is not risen. But if Christ is risen, we have a global mandate to the ends of the earth. That is why Jesus said, “Therefore go and make disciples of all nations” (Matthew 28:19).

The people of the risen Lord can’t help but go – blasted out of the empty tomb. Our calling is to make disciples “of all nations.” The word there, ethnos, is where we get ethnic groups from. What he is saying here is not simply put the church in every country of the world. That’s not what he commanded. He said, “Make disciples of every ethnic group in the world.” There are 24,000 ethnic groups in the world. We are called to plant the church and bear witness of Christ to every ethnic group in the world. Today, there still remain 7,000 people groups with no witness of Jesus Christ, no viable church in their midst, and many haven’t heard the name of Jesus.

People ask if I am exhausted by all the endless conversations at General Conference about issues that we should never have had to discuss. Of course, I am. What really bothers me, however, are the conversations we never had time to discuss, all the mandates we never thought about. Wouldn’t it be great to have a whole day of annual conference to speak about how to mobilize the gospel to the ends of the earth? When is that going to happen? It will happen again. Because God has plans for us.

Let me offer a word to those that are committed to build a new denomination. A new church cannot be built on the foundation of anger, however well placed it may be at times. You cannot build a church with the bricks of discontented United Methodists that come into your movement. You cannot build a church with the mortar of triumphalism. None those things will last. Instead, we have to be a global force of evangelism.

I want to challenge you. We need to reach 1 million new people for Jesus Christ. To do that we have to plant 10,000 churches. We have to be focused on the mission that God has called us to.

In this mission, we must never lose our long standing commitment to theological education. “Teach them to obey everything I have commanded you,” Jesus said (Matthew 28:20). If we do not train our clergy well – and in turn, train our laity well – we will be eaten alive by this culture. A feebly-trained clergy cannot stand against the challenges we’re facing in the days and months ahead. We have enormous challenges.

Yes, it’s expensive. That’s what scholarships are for and I promise you that across this country there will be schools standing ready to help train all future ministers with the best education possible.

“Behold I’m with you always, even to the end of age,” Jesus said. Isn’t that the great news? He is the risen Lord, he sends us out, and he will be with us until the end of the age. We have some very challenging days ahead, but Jesus is standing with us.

For a moment, think back to December 12, 1980. You may not know what happened on that day, but that was the day that Apple stock was first put forward as a public offering.

If you could go back in a time machine, what would you do? You would buy stock. You would put all of your money into Apple stock. People would criticize and say, “What are you doing investing in apples?” Whoever heard of Apple? They wouldn’t know what you know now. You would put all your money in it. You would go to your friends and borrow money. You would invest because you knew where it was going. You knew the future.

As believers, we know where this is going. God is going to bring his gospel to the ends of the earth. Imagine if God were to allow the newspapers to produce one last headline when Jesus returns. The last headline of the New York Times: “The kingdoms of this world have become the kingdom of our Lord and his Christ and he will reign for ever and ever.” The last headline of the Wall Street Journal: “Every knee has bowed, every tongue confessed, that Jesus Christ is Lord.” And, of course, USA Today something like, “Jesus wins.”

God has called us and given us a great mission. We are the people of the risen Lord. He has given us a global Great Commission and we have a mandate to the ends of the earth.

Timothy Tennent is a United Methodist clergyperson and the President of Asbury Theological Seminary in Wilmore, Kentucky. A theologian and a scholar of missiology and Global Christianity, he regularly writes at TimothyTennent.com. Dr. Tennent has authored several books, and his latest, For the Body: Recovering a Theology of Gender, Sexuality, and the Human Body. This article is adapted from his address at the Wesleyan Covenant Association’s Global Gathering in April.