Boundaries of the Faith 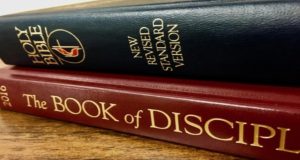 I recently read a diagnosis that said many of the ills in today’s society can be traced to the blurring or ignoring of boundaries. That same diagnosis can serve to describe much of what ails The United Methodist Church.

John Wesley was clear from the beginning that clear boundaries were needed in order to sustain the movement of the Spirit that became Methodism. Those boundaries begin with a clear understanding of what we believe and proclaim. The purpose of our doctrinal standards (Articles of Religion, Confession of Faith, Wesley’s Sermons and Notes) is to define the boundaries of our doctrine.

A primary shortcoming of The United Methodist Church is that our doctrinal standards have functioned mostly as “guidelines” that can be reinterpreted or ignored at will. During United Methodism’s recent history, we have had clergy — and a couple of outspoken bishops — teach such beliefs as: Jesus is not the unique Son of God, that he did not rise bodily from the dead, or that he was imperfect in knowledge and teaching. In instances like these, the boundaries of our faith are not functioning properly. When the clear teachings of Scripture can be ignored or interpreted away, the boundaries of our faith are not functioning properly.

The proposed Global Methodist Church (in formation) sets out clear doctrinal boundaries that are not different from what we currently have in the UM Church. What is different is a commitment to hold one another accountable to maintain and teach the doctrines we say we believe. That commitment makes those boundaries meaningful and clear.

It is often overlooked that the General Rules (do no harm, do good, and attend upon the ordinances of God) are also part of our doctrinal standards. It was expected that Methodists would not only believe and teach certain things, but that they would behave in certain ways. The General Rules are very specific in giving pertinent examples of the general admonitions – forbidding things like cussing, working on the Sabbath, drunkenness, slave-holding, fighting, cheating others, etc. They also promote specific goods we are to do, such as giving food to the hungry, clothing the naked, visiting or helping those who are sick or in prison, instructing others in the faith, patronizing Christian businesses, and being diligent and frugal.

Christians in general, and United Methodist in particular, have fallen away from living up to the standards of Christian conduct set forth in our General Rules. It does not help when the church has established specific rules that are then ignored or disobeyed, whether it be the injunctions against rebaptism or same-sex marriage.

Our society today has a problem with boundaries around the truth – lying, disinformation, and slander are rampant. We also have a problem with sexual boundaries. Many consider the very idea that sex is to be reserved for marriage between one man and one woman to be quaint and outmoded. Yet, our society has reaped the consequences of sexual libertinism in broken homes, damaged children, sky-high abortion numbers, a flourishing pornography industry leading to sex trafficking, the fact that a high percentage of children are born to parents who are not married, and the list goes on.

The proposed Global Methodist Church believes we should have clear boundaries for what constitutes Christian behavior. More importantly, the GM Church will seek to foster an atmosphere of personal accountability and growth in holiness. Living like Jesus is not an instant transformation at the time of salvation, but a process of growing in grace and obedience throughout a lifetime. Participation in discipleship groups will be highly encouraged. Such groups form the foundation of personal growth by giving support to believers on the journey, taking personal sin seriously, offering grace and forgiveness where needed, and lifting up the goal of Christlikeness toward which we all strive. As Wesley said, there is no such thing as “solitary believers.” We need each other for support, encouragement, and accountability to become all that God wants us to be.

The primary reason for separation in the UM Church is because the way the church is organized is no longer working. Actions of General Conference and Judicial Council rulings are widely ignored. The provisions of the Book of Discipline have been relegated to “guidelines” to be followed when convenient or in a person’s interest in doing so, but otherwise ignored. The same bishops can ignore clergy accountability when they disagree with it, while at the same time punitively holding some local churches to follow the smallest detail of the Discipline.

The crossing of some boundaries in church polity has diminished all such boundaries. Why should I obey this provision of the Discipline that I disagree with or is inconvenient for me, when the bishop lets other provisions go unenforced? The church is devolving into a chaotic mess of individualism, undermining the “rule of law” and elevating the rule of individuals in positions of authority. This situation saps the strength of the church in being unable to muster collective effort toward the common goal of evangelizing the world. The strength of Methodist connectionalism is being steadily eroded by the acid of disregarding the boundaries of our polity.

The proposed GM Church is committed to a healthy, functional way of organizing itself. Rather than creating various general agency fiefdoms, each going in its own direction, there will be greater centralization and directional unity in how it functions. The GM Church pairs lower connectional giving based on a fair and equal percentage of church income with the expectation that those percentages will be paid. Local churches will be expected to abide by the Doctrines and Discipline and maintain and teach GM doctrine, behavior, and polity.

Popular today is the idea that one can replace boundaries with the idea of a “centered set.” Boundaries set the outer perimeter of an organization’s identity. A centered set focuses on a central attraction that keeps people together without the need for boundaries. For Christians, this might mean that holding up Jesus as our central attraction and our goal to be like him could mean that we do not need boundaries to determine who is a Christian or how we are progressing on the journey of holiness.

There are elements of wisdom in this idea. But without a sufficient definition of the center, the whole idea falls apart. What does it mean to hold up Jesus as the center? Who is Jesus: miracle worker, wise teacher, or the Son of the living God? Was Jesus’ purpose primarily to show us a better way to live or to provide atonement for our sins on the cross and bring us eternal salvation? How does Jesus expect us to live?

Unless these questions and many more are answered with enough definition, the central attraction is so amorphous that it can mean anything to anyone. Some could be attracted to Jesus the wise teacher, while others to the Son of God. When those looking for the Son of God find out that the church they are in looks at him only as a wise teacher, they become frustrated at the bait and switch and become disillusioned with the church.

Defining the center to which we are to be attracted looks a lot like another set of boundaries. We are to be attracted to this, but not that. Jesus expects this, but not that. The notion of centered sets seems attractive, but it does not rescue us from doing the hard work of defining the faith we hold in common. The less defined the center, the less attractive it will be. (Could that be one reason why many middle-of-the-road United Methodist congregations are not attracting new members? There is little clear definition of what the church stands for and what it wants its members to believe and do.)

A Narrative for the Continuing United Methodist Church

One of my disappointments with the document recently produced by the Council of Bishops describing their hopes for The United Methodist Church after separation is its lack of clarity. Amid lots of good and wholesome language, there is no clear idea of what the UM Church stands for and believes. (Perhaps that is not the intention of the document and there will be other clarifying statements in the future.)

The primary message of the Narrative is that the UM Church is for everybody, all are welcome, and there is no clear description of what it means to be United Methodist. One could be “liberal, evangelical, progressive, traditionalist, middle of the road, conservative, centrist, or something else.” The document speaks of being “united in the essentials,” but begs the question of what those essentials are. Does whoever is in power at a given time define what the essentials are? Will it change from time to time and place to place? Is the priority of Scripture an essential? Is same-sex marriage an essential?

The document speaks of being “deeply rooted in the Doctrinal Standards of the UMC.” How will this be different from the current situation described above, where the standards are able to be redefined in almost infinite ways?

The Christmas Covenant and other proposals that would regionalize UM structure would only further confuse and exacerbate the lack of clear definition or boundaries. Under these proposals, there would be one set of practices in one region, with different practices in another region. What it means to be United Methodist in Germany may well be very different from what it means in Kenya or in Ohio or in California. What happens when people who are attracted to one understanding of Methodism in Germany have to work together with people who have a much different understanding of Methodism from Kenya or the U.S.? They may have fundamental disagreements about what it means to be United Methodist, apart from the idea that anyone and everyone can be United Methodist.

There will be clear choices on the other side of General Conference, if the Protocol for Separation passes. Post-separation, continuing United Methodism may well aspire to be a “big-tent” church with room for all and little clear definition of identity – more of what we have today. At the same time, the Global Methodist Church will be clear in its definition of its identity, beliefs, and practices, maintaining accountability to that definition.

The GM Church will define what its essentials are. It will also allow for flexibility where needed in different contexts to allow for the greatest effectiveness and fruitfulness. But again, there will be clarity about what is needful for all to follow and what matters are able to be flexible (contrary to the current situation in the UM Church).

We have all seen during the pandemic how important clear and consistent communication is and a clear understanding of what the boundaries are. Over the past, that clarity has been missing from the UM Church and, based on what has been publicly shared so far, there is little prospect of clarity down the road. Those looking for clarity and consistency will find it in the Global Methodist Church (in formation). While it will not be perfect in this regard, the GM Church aims to provide a clear and consistent witness to the Gospel of Jesus Christ, Son of God, Savior of the world, and Lord of all and a clear and consistent pathway of transformation by the Holy Spirit for all who would be Christ’s disciples.

Thomas Lambrecht is a United Methodist clergyman and the vice president of Good News.