Being Church In a War Zone 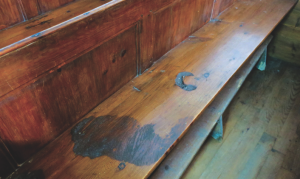 Blood-stains from World War II on the pews of the church-turned-combat-hospital in Angoville-au-Plain, France. Photo by Bob Kaylor.

Driving through the countryside of the Normandy region of France feels a bit like entering the world of an animated Walt Disney film. The green fields, bushy hedgerows, lolling cows, and medieval-period stone houses, churches, and barns call to mind many stories that we learn as kids – stories that begin, “Once upon a time…”

A few years ago, I chose this area because the D-Day battlefields have been a place on my bucket list that I have always wanted to visit. We based ourselves in Sainte Mere Eglise, the tiny village where the 82nd and 101st Airborne Divisions landed in the early morning hours of June 6, 1944. An effigy of Private John Steele of the 101st and his shredded parachute still hangs from the church’s bell tower, commemorating where he landed on the roof that night. During that early morning, this sleepy Norman village quickly became a maelstrom as paratroopers landed in the midst of stunned villagers and scrambling Germans who had been fighting a house fire. The town looks today much like it did in 1944, but with a few more cafes, ice cream shops, and memorabilia stores.

I had arranged an all-day private tour with a local guide, Monica Baan, a Dutch resident of Saint Mere Eglise, who was very knowledgeable and who spent a lot of time interviewing veterans of D-Day, most of whom are gone now. The stories I had read in a myriad of history books suddenly came to life as we walked through the town and then drove to places like Utah Beach, Pointe du Hoc, Omaha Beach, and even to Brecourt Manor where Easy Company and Lt. Dick Winters of Band of Brothers fame fought their first engagement. It was stirring to visit those sites and be reminded of the immense task at hand that day for these soldiers, sailors, and airmen.

As someone with a passion for military history, I knew a lot about what took place, but Monica filled in some gaps with stories I had never heard. While driving through the Norman countryside, she stopped by a little church in the village of Angoville-au-Plain, a place so small that it’s barely noticeable in the midst of the bucolic backdrop of farms and fields. “I want to tell you a story you probably have never heard,” she said. We went through the side door of a small 11th century Catholic church into a quiet sanctuary where the story took place.

In the early morning hours of D-Day, thousands of U.S. paratroopers were scattered across Normandy and small crossroad villages like Angoville-au-Plain suddenly became hotly contested territory. As the wounded began to cry for help, two medics from the 101st, Robert Wright and Kenneth Moore, looked to set up an aid station and the village church seemed to be the best available option. They set about gathering the wounded from both sides into the church using a handcart and wheelbarrow they found, often exposing themselves to enemy fire in the process. They used the pews of the church as hospital beds and, incredibly, there are still several of those wooden benches in use that continue to show the stains of blood where those wounded were treated.

A hole in the roof, still stuffed with canvas, and a shattered tile on the floor are remnants of the intense fighting around the church where a mortar round entered the sacred space but failed to detonate. As the battle raged back and forth, American paratroopers were forced to retreat from the village and the medics faced a difficult decision. Their lieutenant wanted to withdraw them, but Wright and Moore insisted on staying to tend to the wounded, even if it meant their capture by the enemy.

Robert Wright described the scene in the church on the evening of D-Day: “By the evening we had 75 of them (wounded personnel and one local infant, in the church). Our own folk had come to tell us that they could not stay any longer. So we were left with the wounded. A German Officer soon arrived and asked if I could tend to his wounded too. We accepted. During the night the churchyard was the scene of another battle. Two of our casualties died. But among those I could tend, none lost their lives. I tended all sorts of wounds, some were skin deep but others were more serious abdominal cases.”

The battle raged outside for three days, with the village changing hands several times. All the while, Wright and Moore kept tending the wounded from both sides. At one point, several Germans stormed through the door of the church, but seeing that the medics were treating wounded from both sides they quietly left and marked the door with a Red Cross. In another instance, a German soldier came seeking treatment but Wright and Moore had established a rule that no weapons would be allowed in the church. They refused to treat the German until he added his weapon to the growing pile outside the church door. He would eventually do so and come under their care.

The windows of the church were all blown out and Wright was hit by a piece of the falling ceiling. He would receive a Purple Heart for it, but it was a medal he only grudgingly accepted. On June 8, a couple of days into the fighting, two Germans who had been in the bell tower of the church since before D-Day finally came down and surrendered to Wright and Moore, who immediately put them to work. The medics tended the wounded for 3 days straight with no break and no sleep, short on supplies and under constant fire, but they saved some 80 lives in the sanctuary of this little church. Many other lives would be birthed in the future families of those whom they saved. The pews that had been built for saving souls became the place where people broken by conflict and pain found salvation of their bodies as well.

As I listened to Monica spin out this true story, it occurred to me that Wright and Moore were doing the ultimate form of pastoral ministry in that holy place. They had been baptized by fire and ordained by duty to continue their work. They were priests officiating over a sacrament of broken bodies and shed blood. Their tireless work revealed a much deeper truth about what the church is about – a hospital for broken people, no matter their “side” or whether they are combatants or innocent civilians. These priestly medics seemed to understand this instinctively to the point at which even their enemies recognized the importance of the mission. They were being the church, not just using one for an aid station.

With this story echoing in my soul, I began to have a deeper awareness of the wounded people I saw around me. I noticed them walking around places like London and Paris, standing in doorways puffing a cigarette, or crammed into a pub looking for some solace or community. I saw it in the hollow eyes of business people walking quickly to a job they might have hated and in the immigrant trying to find his way in a strange new land. Casualties are stacking up in a culture where people have become commodities and pawns in a consumeristic war for their bodies and souls. What sort of ministry will reach them?

It will be the kind of ministry that will risk everything to save the people around us, no matter who they are. I loved the way one pastor put it in his welcome at one church I visited that summer: “If you’re our guest today, we want you to know that this is a place where it’s OK to not be OK. But our hope is that you don’t want to stay in that not-OK place. We love you enough to tell you the capital ‘T’ truth about Jesus Christ.” That’s a welcome for all – an invitation to add our weapons and conflicts to the pile outside and come inside to be made whole.

I spent the first part of my life and ministry as a soldier – a soldier bearing weapons of war and then the sword of the Word of God, which I have wielded in defense of the faith. Those are both honorable occupations, but standing in that little church in Normandy I felt a conviction that what the world needs the church to be right now is more of an aid station, and pastors to be more like medics. The cultural battles might continue to rage around us, but we have a job to do. It’s not to preserve a pristine institution, but to be the kind of place where blood stains on the pews remind us that our work is about saving lives, both bodies and souls.

Robert Wright would return to Normandy in 2002 for the dedication of a monument to what he and Moore did during those three days in June. He died in 2013 and is buried in the little cemetery outside that church in Angoville-au-Plain under a simple marker that reads “R.E.W.” He wanted his final resting place to be near this sanctuary of life that he and his friend created in the midst of horror and death.

I loved that this little church didn’t fix the holes, patch up the floor, or scrub down the pews after the war. The missing pieces of stone on the walls that were taken off by bullets and shrapnel haven’t been paved over. They did replace the windows, but with a tribute to these two medics who became saints. This holy place is now a monument to the kind of church God has called his church to be.

Bob Kaylor is Lead Pastor of Tri-Lakes United Methodist Church in Monument, Colorado. He is a member of the Good News Board of Directors and a council member of the Wesleyan Covenant Association. Dr. Kaylor is the co-host of the WCA podcast called Holy Conversations.