Archaeologist, Mama, Defender of the Faith 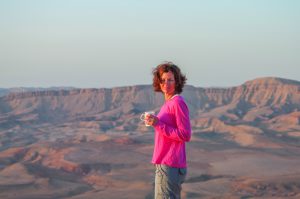 Dr. Sandy Richter at the edge of the Ramon Crater in Israel. Photo by Lawson Stone of Asbury Theological Seminary.

The petite, deeply tanned woman you might find at a local coffee shop or watching her daughter’s figure skating practice has an unassuming air and wry sense of humor that leans towards the self-deprecating. Behind the quiet presence lies a quick intensity that shows up in a piercing gaze and direct questions frankly stated.

The tan may come from gardening – or hours spent under the Middle Eastern sun digging in archaeological excavations with college and seminary students. The same daughter who now skates was once worn in a baby carrier to digs in Israel. The woman’s childhood in foster care has given her quick instincts for others’ pain, and she is quick to walk alongside them as they find healing, hope, and redemption in the broken lives of patriarchs and cast-off women scattered through the first two-thirds of the Bible.

When asked what initially hooked her in to the Old Testament – a subject in which it’s difficult to call to mind many female biblical scholars – Richter responded with her characteristic frankness and zeal:

“There aren’t many women in my age category in biblical studies at all! Add a husband and children to that and the numbers drop dramatically,” Richter responds. “I started studying Bible for the sake of ministry. When I realized I would be transitioning from ministry into education, I went back and studied more. By then I was doing Hebrew and Aramaic and archaeology and systematics.” Before long she was intensively studying Hebrew (known as Rapid Reading) under Jo Ann Hackett, noted Old Testament scholar at Harvard University, and working on the Tel Dothan archeology collection in Jerusalem under Gary Pratico from Gordon-Conwell Theological Seminary. Richter took modern Hebrew at Hebrew University in Jerusalem and applied to excavate under Larry Stager of Harvard University in Ashkelon, a historic Philistine city along the coast of Israel. For her, there was no turning back. 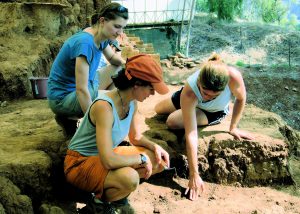 Ten years ago, Richter had put the final touches on a book adapted from her Introduction to Old Testament seminary class content. Pastors she trained were yearning for a way to easily communicate the depth of her material to their congregations. After all, the Old Testament is often the wince-inducing portion of the Bible for many Christians. Richter continually managed to do something almost quixotic: she made the Old Testament clear and approachable – and therefore interesting – without sacrificing nuance, substance, or academic rigor. The Epic of Eden will soon be out in a 2nd edition from InterVarsity Press, while the Seedbed Publishing curriculum that builds on the original volume continues its widespread popularity.

“What actually strikes me the most about Epic is the sense of calling I had in writing that book,” Richter reflects. “Of course, in academia you are expected to write. Getting a job, building a reputation in the guild are all dependent on getting those books and articles out. But with Epic I felt called to write the book. I honestly felt like God wasn’t going to let me die until it was written. And now looking back at these past ten years — I am struck by the fact that it has been my most widely distributed and most influential publication.” 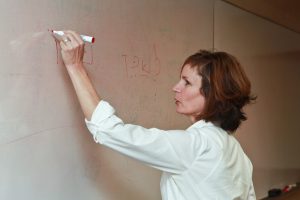 Richter’s sense of personal calling and her ability to bridge the divide between pulpit and chalkboard are hallmarks of her writing and teaching. She has influenced students at Asbury Theological Seminary, Wesley Biblical Seminary, Wheaton College, and now holds the Gundry Chair at Westmont College in Southern California. Whether she’s typing away at a scholarly piece for an academic journal or eating pie in a church basement, Richter finds much to be encouraged by in both the academy and the church.

“In the academy I continue to be encouraged by what I see happening on the side of archaeology, epigraphy, and ethnographic studies,” Richter said. “Amazing new data is coming to light on a daily basis that is putting ‘flesh’ on our biblical characters. For example, the translation and publication of the Mari archive is giving us tremendous new insights into the era of the patriarchs.” Mari is an ancient library that dates to c. 1800 BCE that contains scores of letters and administrative texts involving the identity, language, and movement of the Amorite nomadic pastoralists.

“The first Philistine cemetery to be discovered was just excavated two years ago and being written about currently,” she reports. “The continuing trickle of finds from the City of David excavations are bringing biblical heroes into focus such as Hezekiah. We might even have the Isaiah bullae. Cool stuff.” For lay readers, a bullae is a lump of clay impressed with a person’s seal for a personal letter or document so the recipient knew the correspondence had not been tampered with.

She is always on call to teach clergy and laity alike. “As always, I look into the faces of our pastors and I pray for vision and endurance. These folks are on the front lines and taking it from every side,” she said. “As for the lay people, it is completely untrue that they are disinterested in serious study of the Bible! Hundreds show up every single time with hungry hearts and a level of dedication that puts the rest of us to shame.”

Her speaking schedule takes her to camp meetings and academic conferences alike, among the Redwoods or Swiss mountaintops. She is as comfortable celebrating scripture in a church fellowship hall as she is on a platform speaking to thousands of pastors at a clergy conference.

And that’s what characterizes what others might anemically attempt to call her career: Richter celebrates scripture. She relishes it with a zeal that makes casual students suddenly ponder why they haven’t considered signing up for archaeology or a dead Middle Eastern language. 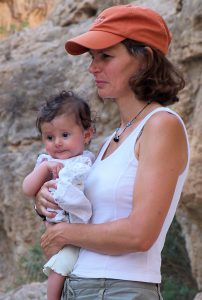 Dr. Richter holds her daughter Elise at four-months-old in the Wadi Qelt. Photo by Lawson Stone of Asbury Theological Seminary.

“I am convinced that people want to know what is in the Bible. Believers and unbelievers alike are more than curious about the characters who stand as the ancestors of the faith,” she said.

Richter doesn’t waste time with bland Bible study platitudes and inspirational quotes; she delves for something deeper, harder: the truth of the nature of God as it is revealed in the grand narratives of the text. And it turns out, people are starving for it.

“I am as interested in the archaeologically reconstructed economy of the southern Levant in the Iron Age as I am in the ethics of environmental concern as I am in the 6th grade girl sitting in my living room reading the story of Abraham for the first time,” she said. “So bringing the technical data within reach of the average believer and offering them an informed theological read of the text that actually applies to their everyday life and faith here and now.”

Richter believes that both the Church and the skeptic need that opportunity. “It is important that the person sitting in the pew can say with confidence, ‘Hey, I don’t understand all this stuff about the immigration of Semites into the Wadi Tumilat region of Egypt during the Middle Bronze Age, but Sandy Richter does. And she says that immigration helps substantiate the plausibility of Jacob’s immigration into Goshen. So apparently I’m not an intellectual toad for thinking an Exodus might be possible.’

“It is equally important that the skeptic can ask the hard question and get a well-trained and informed response. A God-honoring, Ivy-league response to the hard questions creates ‘room for faith’ for believer and unbeliever alike. People still want real, respectable answers.”

Richter’s commitment to her calling illustrates an unwillingness to pit faith and reason against each other. Piety is not an excuse for sloppiness; academic excellence does not replace the necessity to be of service to the church. A high view of scripture doesn’t exempt one from rigorous study: it demands rigorous application.

The professor is careful in her classes to distinguish what an archeological find can prove about a biblical account versus what it shows may be consistent with the Bible’s account of a particular event. In this way, evidence is carefully weighed. At the end of the day, she queries students, does the evidence leave room for faith? She is happy to say it does.

“The last thing the Church needs is another shoddy, half-baked answer to a real and necessary question,” she said. “If we truly believe that the God of the Bible is the God of truth, we have nothing to be afraid of as we delve deeply into the content and context of the Bible. But if we lie to our children and our congregants in order to ‘protect’ them, give them half-truths that we know one day their own disciplines will expose as false, we are risking their very souls.”

It is a happy antidote to the kind of flippant “God says it, I believe it, that settles it” bumper stickers that shut down curious inquiry into the world of the Old Testament. And what she finds, wherever she goes, is that young and old believers alike are eager to ask these questions and get weighty answers.

It is a rare scholar who influences academics, clergy, and laity with such strong conviction and far-reaching consequence. But this is how Richter lives out her calling in the broad Kingdom of God. The scriptures don’t get old, and her love of them does not wane with re-reading, but deepens.

“God deserves our best. I am a biblical scholar,” Richter states. “And I intend to be as good at that calling as I possibly can be.”

Her charge is clear every time she speaks and teaches: this is the story of God’s activity in real time, in real places. This is your story. This is our story. Tell the story, and tell it well. She lives out that charge with fierce particularity and gentle joy.

“What keeps me in the game is the transformation on the faces of my students,” she said. “There is magic in that moment when the person you are teaching realizes, often for the first time, that this is their story.”

Elizabeth Glass Turner is a frequent and beloved contributor to Good News. In addition to being a writer and speaker, she is Managing Editor of www.WesleyanAccent.com. Look out soon for Richter’s The Fifth Gospel: A Christian Entry in the Book of Isaiah.