Apportionments and the Viability of a Connectional Church

Some United Methodists are pleased to pay them, others have come to loathe them, and still others have little or no idea they are contributing to them when they tithe and make gifts to their local church on Sunday morning. The “them” is apportionments; financial payments local churches make to fund the mission of a large, connectional denomination like the UM Church.

The report of a record struck some United Methodists as counterintuitive given all the turmoil in the church. The long and acrimonious debate over the church’s sexual ethics and teachings on marriage has reached a crisis point. Several regional bodies have voted to defy its teachings, and one jurisdiction elected an openly gay bishop. These troubling developments come on top of news that average worship attendance at local UM churches continues to plummet, reports that some congregations are withholding their apportionments, and that some individuals are requesting that their personal tithes and gifts not be used to pay their church’s share.

So how, when it comes to apportionments, could the UM Church be setting any records? After all, apportionments are the financial means we pay for 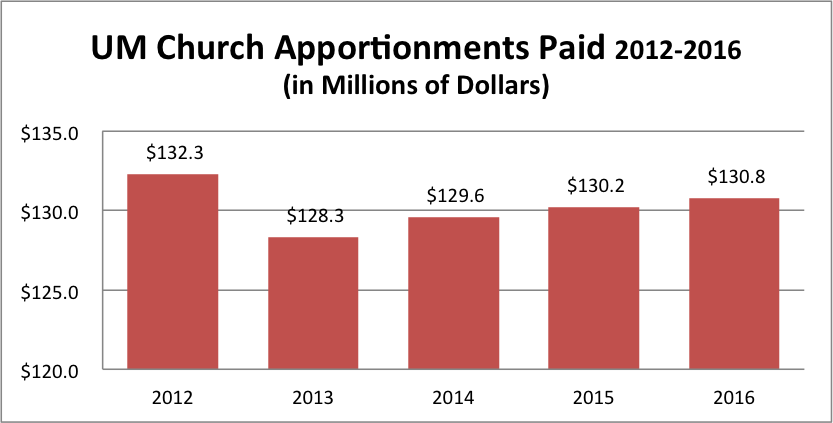 Well, first it is important to clarify what the GCFA’s press release and the UMNS article did not say: neither report that a record amount of dollars have flowed into the denomination’s coffers. In fact, the 56 annual conferences contributed $130.8 million in 2016, just three-tenths of one percent more than the previous year’s $130.2 million, but well below the annual inflation rate of 2.1 percent.

Giving to the denomination actually reached a ten year high back in 2012 when the conferences forwarded a collective $132.3 million. Giving then dropped precipitously the following year ($128.3 million or minus 3 percent) and ever since the church has been struggling to regain lost ground.

Second, it is not surprising more annual conferences are paying 100 percent. The apportioned amount GCFA has asked of each conference has fallen or remained flat seven of the past ten years. The general church asked for a ten year high of $151 million in 2008, but by 2016 it had lowered its target to $143.1 million, a 5.2 percent drop. In short, as the church sets the apportioned amounts lower more conferences are able to meet them. (It should be noted GCFA does not arbitrarily apportion amounts to the annual conferences; each year it uses a formula approved and deemed fair by the general church.) 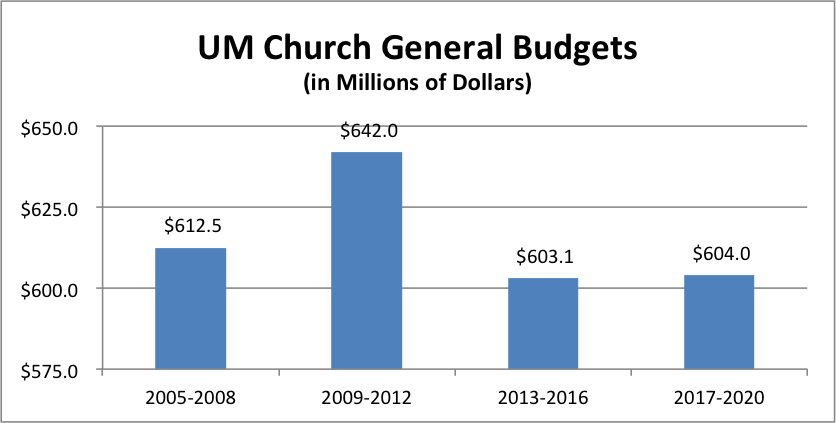 This drop in the amounts apportioned to annual conferences comes from the general church budget, which is set by General Conference every four years. The budget has slipped dramatically over the past three General Conferences. It reached a high of $642 million for the 2009 – 2012 quadrennium, and then fell to $603.1 million for 2013 – 2016. The 2016 annual conference essentially voted to keep the budget flat in terms of actual dollars by approving a general church budget of $604 million for 2017 -2020.

In short, while 27 annual conferences paying 100 percent of their apportionments is good, it is a data point that needs contextualization.

The UM Church’s failure to keep pace with inflation has forced it to make cuts in
terms of program and personnel, and curbed its ability to fund new initiatives. For instance, from 2014 to 2015 the annual conferences collectively eliminated 27 districts in an effort to reduce expenses. That is the largest single-year reduction in the church’s history.

Finally, apportionment payments are a lagging indicator when it comes to the UM Church’s health and vibrancy. As most pastors and church treasurers will testify, it always seems like a small percentage of a congregation – those most invested in its mission and goals – step up to make sure a local church meets its obligations and then some. Consequently, giving to local churches, and subsequently to annual conferences and the general church, does not necessarily track closely with the ups and downs of membership and worship attendance. In fact, it is not unusual to see giving increase even though membership and worship attendance decline, but of course this is not a sustainable model.

Over the past ten years giving in actual dollars to the UM Church’s general funds has stagnated, and fallen significantly behind when accounting for inflation. It is laudable that 27 annual conferences paid 100 percent, but there is more to the story, and unfortunately, it is largely troubling.