A Secular Religion: The Challenge We Face 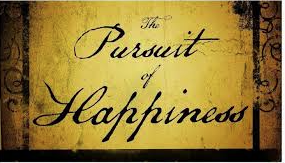 A recent article in the journal First Things by Mary Eberstadt entitled The Zealous Faith of Secularism makes the case that the challenge we face in the United States and the Western World is one of competing faiths or competing ideologies. Christianity faces off against a secularism that has its own dogmas. Some of those dogmas are so entrenched in our culture that we don’t even recognize them as beliefs in competition with a Christian worldview.

One of these secular dogmas is that the purpose of life is personal happiness. This stems, of course, from the uniquely American DNA reflected in our Declaration of Independence, that holds that we are endowed by our Creator with certain “unalienable Rights, that among these are Life, Liberty and the pursuit of Happiness.” Our American “religion” believes that we have the right to pursue happiness in whatever way we believe best, whether we eventually find it or not. This has evolved into the idea that the pursuit of happiness is the purpose of life. It has led to a focus on materialism/greed, sex, and power in a misguided quest for happiness.

Instead, we believe as Christians that the purpose of life is to know God and to glorify him with our lives. That may or may not make us happy in the moment, but it will lead to our ultimate happiness and the deepest joy. C.S. Lewis talks about that in his book, Mere Christianity. “What Satan put into the heads of our remote ancestors was the idea that they could ‘be like gods’ — could set up on their own as if they had created themselves — be their own masters — invent some sort of happiness for themselves outside God, apart from God. And out of that hopeless attempt has come nearly all that we call human history — money, poverty, ambition, war, prostitution, classes, empires, slavery — the long terrible story of man trying to find something other than God which will make him happy. … God cannot give us a happiness and peace apart from Himself, because it is not there. There is no such thing.”

Another secular dogma is that sex is for pleasure, and I am entitled to have as much of it as I want, with whomever I want, whenever I want. The idea that we ought to reserve sex for the committed relationship of marriage is often thought to be quaint and old-fashioned, if not downright detrimental to happiness (see dogma #1). Paul faced this attitude in Corinth, which prompted him to write: “The body isn’t for sexual immorality but for the Lord, and the Lord is for the body. … Don’t you know that your bodies are parts of Christ? So then, should I take parts of Christ and make them a part of someone who is sleeping around?” (I Corinthians 6:13-15, CEB). Sex is sacred, and we find our greatest joy in reserving the sexual relationship to be shared only with our spouse — but that is not the message that we hear from the world each and every day.

A third dogma is that a woman can do what she wants with her own body, and a fetus is only a part of a woman’s body, not an independent life form. Of course, this leads to the demand for abortion to be available at any time, for any reason, up until the last day of pregnancy. This fits very well with dogma #2, since abortion makes it possible for a person to enjoy unlimited sex without the inconvenience of a child (one of the actual purposes of sex). What a different attitude is portrayed in Psalm 127:3: “children are a gift from the Lord; the fruit of the womb is a divine reward.”

A fourth dogma is that marriage is a relationship between any two people (and sometimes not even limited to two) who want to commit themselves to each other. A corollary dogma is that sexual orientation is inborn and unchangeable, and that it is unjust to expect persons with same-sex attraction not to find the fulfillment of marriage that heterosexual people do. Based on these beliefs, people are prepared to change the definition of marriage that has held true for all civilizations for at least 5,000 years. It doesn’t matter that the scientific evidence is decidedly against sexual orientation being an inborn characteristic. It doesn’t matter that some people have indeed changed their sexual orientation. It doesn’t matter that Jesus defines marriage as between one man and one woman (Matthew 19:4-6, cf. Genesis 2:24, I Timothy 3:2).

That last point is what reveals these dogmas as ideologies or quasi-religious matters of faith. They are not based on any kind of empirical evidence. They are just “truths” that people are expected to agree with. And if one disputes these dogmas, there is a visceral, angry reaction to silence dissent and compel (if possible) belief.

I could go on listing secular dogmas, but what the church faces today is a fully developed ideology or religion that cuts out God and substitutes articles of faith that it believes will lead to human happiness. Of course, we know (as Lewis stated in the quote above) that there is no lasting happiness apart from God. But we sometimes allow these secular dogmas to creep into our thinking and guide the church’s beliefs and actions. That is the source of our theological conflict in The United Methodist Church today. It is a conflict between traditional, orthodox, biblical Christianity and a Christianity that is influenced by secular ideology.

There is a paramount need to self-critically discern where our theology, ethics, or actions are being influenced by secular ideology. The best antidote to this poison is to be thoroughly steeped in a biblical worldview. We need to know biblical theology to protect ourselves from the secular counterfeit, and we need to live out that biblical theology in order to have any hope of convincing the world it is wrong. It comes back to the formation of Christian disciples as the supreme task of the church. The challenges we face today show that we have not been entirely successful in that task.