A Primer on the Conflict (Part II) 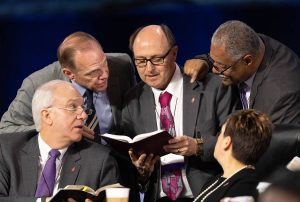 Bishops confer over the issue of whether the legislative committee can refer items to the denomination’s Judicial Council for review during the 2019 United Methodist General Conference in St. Louis. Clockwise from lower left are Bishops Thomas Bickerton, John Schol, David Bard, Julius C. Trimble, and Cynthia Fierro Harvey. Photo by Mike DuBose, UMNS.

In conversations and emails, I have frequently heard frustration and confusion regarding the situation in The United Methodist Church. Perhaps a succinct overview of our conflict will be helpful to people who are lost in the details or new to engaging with it. Naturally, this summary is offered from the point of view of a traditionalist, and others may see events differently.

Last week, we discussed the history and evolution of the conflict and identified the players. Today we examine the strategies of the different players and the plans to be considered in Minneapolis.

Up until the late 2000’s, many centrists voted with traditionalists because they thought it was the best way to keep the church together. Due to increased cultural acceptance and changing church political calculations, nearly all centrists are now siding with the progressives in pushing for change in the church’s position. Some progressives (most notably RMN) are willing to work with centrists to create a “big tent” church that allows, but does not require, same-sex weddings and ordination. Other progressives, however, are impatient with this approach and desire immediate affirmation and “liberation” of LGBTQ persons in the church (primarily the UM Forward group).

Some centrists and progressives believe that “history” is on their side and are committed to staying in the UM Church indefinitely to fight for changing the church’s position, while perhaps allowing traditionalist congregations to leave with their property. Other centrists and progressives believe that the only way to resolve the conflict and move forward is for separation to take place or to withdraw from the church (if it continues a traditionalist position). While 57 percent of centrist and progressive leaders voted for some form of separation at a spring meeting, some were encouraged to stay and fight by the increased success of centrist and progressive clergy being elected as delegates to General Conference 2020.

Some traditionalists believe that we should continue to fight to preserve the current stance of the UM Church indefinitely, while providing a gracious exit for annual conferences and local churches who cannot live with that stance. Most traditionalists, however, are in favor of some form of amicable separation plan that ends the fighting and allows traditionalists to come together in a new denomination that can carry out the church’s mission and ministry unhindered by opposition from an incompatible theological perspective.

A wild card in all of this is a conversation convened by Bishop John Yambasu of Sierra Leone (Africa). In a series of meetings currently ongoing, progressive, centrist, and traditionalist leaders, central conference representatives, central conference bishops, and U.S. bishops are meeting with a professional mediator to explore the possibility of a “grand bargain” that all could agree to. If successful, this group could propose new legislation for 2020 or modify proposals that have already been submitted. Although the deadline for submitting proposals to the 2020 General Conference has passed, the Book of Discipline allows an annual conference to submit a new legislative proposal no less than 45 days before General Conference (¶ 507.6). A special annual conference session could be called to submit such a new plan. It remains to be seen whether this mediated conversation will reach agreement on a new proposal.

A number of plans to resolve the crisis have been submitted to the 2020 General Conference, many of which have not been publicized. Below are the three most public and viable plans.

The Traditional Plan seeks to pass most of those parts of the plan that were found unconstitutional by the Judicial Council or were not passed in St. Louis. Provisions mainly enhance the accountability of boards of ordained ministry, create a new accountability process for bishops through the Council of Bishops, and create a pathway for annual conferences and local churches to withdraw from the church with their property in a less expensive way. The Renewal and Reform Coalition views this option as our “Plan B” in case a plan of separation does not pass General Conference.

The Indianapolis Plan was developed by a working group of progressive, centrist, and traditionalist leaders. It is a plan of amicable separation that would create two or more new denominations birthed out of the UM Church based on theological perspective, including a centrist denomination that continues the current structure and polity of the UM Church. The denominations would have no organizational link with each other, but could work together on clergy pensions and benefits (Wespath), UMCOR, and the Publishing House. Annual conferences and local churches could decide by majority vote with which of the new entities to align. General church assets would be equitably divided among the new denominations. The new denominations would begin organizing immediately and be fully up and running by January 1, 2022. (See indyplanumc.org for more details.) The Renewal and Reform Coalition supports this option as its preferred plan, and it has been formally endorsed by the WCA Council. Other progressive and centrist leaders have also endorsed the plan.

The Next Generation UMC Plan was developed by the UMC Next leaders, including centrists and some progressives. The plan would repeal the parts of the Traditional Plan that were passed in St. Louis. It would also change the church’s position by deleting the teaching that “the practice of homosexuality is incompatible with Christian teaching,” allowing same-sex weddings, redefining marriage by removing the idea that there be two spouses and that they be a man and a woman, and allowing persons in same-sex relationships to be ordained and appointed as clergy. The plan creates a moratorium on all complaint processes related to sexuality and would allow church money to be spent to promote the acceptance of homosexuality. The plan provides for local churches (but not annual conferences) to withdraw from the church with their property by a two-thirds vote of the church conference in a less expensive way. Rather than an equitable division of general church assets, the plan envisions the General Conference making grants to departing churches from apportionments paid during the 2021-24 quadrennium. (See https://umcnext.com/legislation/ for more details.) This plan is supported by UMC Next, Mainstream UMC, Uniting Methodists, and Reconciling Ministries Network.

Amidst all the confusion and maneuvering, United Methodists should pray for God to bring clarity and some degree of consensus on a positive way for our embattled denomination to move forward in ministry.