A Matter of Belief or Action? 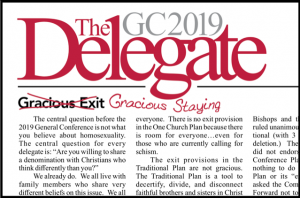 Ask the wrong question, and you will get a wrong or misleading answer. Asking the right question will help move toward understanding. A recent newsletter from the One Church Plan advocacy group “Mainstream UMC” makes the claim that, “The central question for every delegate is: ‘Are you willing to share a denomination with Christians who think differently than you?'”

With all due respect, that is the wrong question. Neither the Traditional Plan nor the Modified Traditional Plan nor the revisions being made to those plans ask for uniformity of belief in The United Methodist Church on the question of the church’s ministry with LGBTQ persons. For fifty years, evangelicals and traditionalists have shared a denomination with Christians who think differently than we do.

While most United Methodists can accept the idea that there will be differences of opinion and belief within the church, many could not accept that the church would have mutually contradictory teachings or practices. The contradictions would undermine our connectional system, moving us toward a congregational arrangement and fundamentally altering our Methodist identity.

The Modified Traditional Plan requires annual conferences to vote on this statement: “The annual conference and its subsidiary units will support, uphold, and maintain accountability to the United Methodist standards found in The Book of Discipline of The United Methodist Church, 2016, in their entirety, including but not limited to ¶ 304 ‘Qualifications for Ordination,’ ¶ 341 ‘Unauthorized Conduct,’ ¶ 613 ‘Responsibilities of the Council on Finance and Administration,’ and ¶ 2702.1 ‘Chargeable Offenses.'” The focus of this statement is not beliefs, but actions. Will the annual conference abide by the provisions of the Book of Discipline or not?

The Modified Traditional Plan requires bishops to certify this statement: “I, (Name), certify that I will uphold, enforce, and hold all those under my supervision accountable to the standards and requirements of The Book of Discipline of The United Methodist Church, in their entirety, including but not limited to standards on marriage and sexuality and the ordination of self-avowed practicing homosexuals (¶¶ 304.3, 341.6, 414.2, 5, 9, 613.19, and 2702.1a-b).” Here again, the focus is not on belief, but upon action. Will the bishop abide by, and hold his or her clergy and congregations accountable to, the Book of Discipline or not?

Clergy are not required to certify anything. They are merely required to “maintain their conduct within the boundaries established by the Book of Discipline.” That is what they have always been required to do.

It is false to say that the MTP seeks to drive out those who think or believe differently. It only requires those who desire to be United Methodist to maintain their conduct within the boundaries set by General Conference.

Any organization or business has standards and requirements, and consequences for failing to keep those rules. The church is no different. Those employed by the church, just like those who are members of organizations or employed by a business, are expected to keep the rules of the enterprise. This is not unreasonable, but essential. Inability to live by a common set of guidelines creates anarchy within an organization.

The question is what happens when a person disagrees with the rules that have been established. One may try to get the standards changed, while continuing to live by them. Progressives have worked for over 40 years to change the covenant standards of The United Methodist Church, but have been unable to convince a majority to make that change. Change in the near future seems unlikely. But this response has integrity and allows for the expression of dissenting opinions.

If the disagreement with the rules is a matter of deep conscience or fundamental belief, one may make the decision that integrity demands they resign their position in order to find another church that has standards they can live by. This response also has integrity, maintaining the identity of the organization while recognizing that one may no longer fit within it.

What does not have integrity, and a course too many have adopted, is when our church’s leaders, from some bishops on down, determine they do not have to live by the denomination’s rules. Whether it is failing to live by, or enforce, the Discipline or electing an openly lesbian bishop, their disobedience has fostered the crisis we are in. It distorts our church’s identity and forces the church to devote too many of its resources to gaining compliance with our standards in order to maintain our identity.

The Mainstream UMC caucus newsletter says, “Schism is NOT inevitable. It is a choice by a few.” That is right. The few who have chosen to flaunt the church’s standards and processes in disobedience have created schism. It is not only inevitable, it is already here. Proponents of the Modified Traditional Plan simply recognize a reality that proponents of the One Church Plan want to waive away.

The accountability provisions of the Modified Traditional Plan are not designed for the purpose of punishing people. They are designed to motivate United Methodist leaders to adjust their behavior to stay within the boundaries established by the church. Those who cannot abide by our requirements ought to have the integrity to withdraw from a denomination they can no longer support. Their insistence on disobeying and disrupting the church in order to impose their own judgments is an inappropriate response to 40 years of consistent decisions by our global church and is destructive of the very church they love.

Only by restoring uniformity of practice can our church begin to reestablish its identity. We insist our pastors baptize infants, encourage women to participate in ordained ministry, and offer ourselves in service through the appointment system. That is part of our DNA as United Methodists. Whether they agree with those requirements or not, pastors are expected to abide by them. A common standard of sexual morality is also part of our DNA. To dismantle it would be to deny or fundamentally change our identity.

Is it any wonder that many who hold traditional understandings of biblical sexual morality would find themselves unable to continue in a church that so dramatically changed its identity? Yet the Mainstream UMC and Uniting Methodists caucuses would deny such traditionalists an opportunity to act with integrity on their consciences by withdrawing as a congregation, keeping the mission and ministry of that local church intact. Instead, they want to force people to leave as individuals without church property, destroying a congregation’s ministry in the process.

Mainstream UMC says, “The Commission on the Way Forward did NOT introduce the idea of ‘exit.’ The ‘exit’ provisions were introduced by the few rogue anonymous bishops who wrote the Traditional Plan.”

The answers to these questions will determine whether The United Methodist Church has a faithful future ahead, or will simply follow all the other mainline U.S. Protestant denominations into legal conflicts, decline, and irrelevance.