A Crisis of Identity 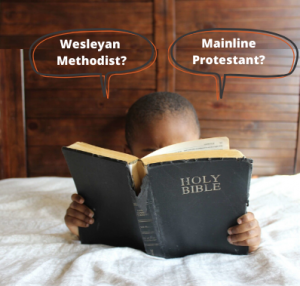 The current crisis in The United Methodist Church is often portrayed as a crisis of unity. The unity of our denomination is threatened by deep theological disagreement and the refusal of some parts of the church to abide by the decisions of General Conference and live by our legitimately enacted Book of Discipline.

Some prescribe the remedy for this crisis of unity as a loosening of the boundaries of the church, enlarging the “tent” under which the church exists, so that there is “room for all.” The priority here is maintaining some sort of institutional unity where we can all say we are United Methodist, even though we believe different things and adopt different practices of those beliefs.

Followed to its logical conclusion, this prescription would lead us to wonder just what it means to be “United Methodist.” If one can believe just about anything and practice our faith in diametrically opposite ways, yet still be United Methodist, that identification becomes almost meaningless.

This points us to an underlying issue in our church conflict, which is a crisis of identity. There are sharply different understandings of what it means to be “United Methodist.” The divergence can be summed up in the title of the book, Mainline or Methodist, by the Rev. Dr. Scott Kisker, a professor at United Theological Seminary in Dayton, Ohio. Is our church’s identity better defined as “Mainline Protestant” or “Wesleyan Methodist?”

A recent talk given by retired Bishop Timothy Whitaker traces the evolution of Methodism from its early roots in England and America through its theological liberalization and incorporation into the Protestant mainstream. He maintains, “Our problem is not merely a failure of action, it is also a loss of identity.”

We see this born out in the church’s attitude toward the practice of homosexuality. Over the past ten years, there has been a dramatic shift in the U.S. and Western Europe toward acceptance and even affirmation of same-sex relationships. In line with that shift, a major part of the U.S. mainline church has shifted, as well. United Church of Christ, Evangelical Lutheran Church in America, Presbyterian Church (USA), and The Episcopal Church have all changed their stances to endorse same-sex relationships as God’s will. A significant percentage of United Methodism in the U.S. and Western Europe has made the same shift. (One can quibble with the assertion that two-thirds of U.S. Methodists support this shift. Certainly, that is true of the annual conference and general church leadership. It is questionable whether that same degree of shift is present at the grass-roots level.)

The vision of special-interest caucuses such as “UMC Next” and “Uniting Methodists” is to be “on the right side of history” and to support the cultural shift toward affirmation. They seem to desire identification as “mainline” and to be in step with the liberal culture of our time and place. They take it for granted that the UM Church should change its position to endorse same-sex marriage and welcome practicing gays and lesbians as ordained clergy. For the sake of church “unity,” they may be willing for a time to put up with those who have not yet made the shift. But traditionalists who hold steadfastly to an “outdated” understanding of morality will not long be welcome.

In sharp contrast to this cultural, “mainline” conception of the church, most traditionalists believe the church ought to be faithful to its Wesleyan Methodist roots. From its very beginning, Methodism was a counter-cultural community within a decadent society. Its strength was its cohesion around that identity in adopting both strictly orthodox theology and high moral standards and practices that set them apart from the culture in which they lived. (Some of those standards and practices make us wince today. Have you read the General Rules lately?)

As Bishop Whitaker points out, this concept of a counter-cultural community dates back to the Exodus, when God called the people of Israel to be set apart for him, different from all the other nations of the world, “a priestly kingdom and a holy nation” (Exodus 19:5-6). For over 3,000 years, the Jewish people have maintained their unique identity as a people set apart, with different standards and different practices. These were not just cultural differences, but born out of obedience to the one true God, who commanded them, “Be holy because I, the Lord your God, am holy” (Leviticus 19:2).

The New Testament extends this conception of the people of God to the Church. We are incorporated into God’s people through faith in Jesus Christ, as recognized in baptism. “But you are a chosen people, a royal priesthood, a holy nation, a people belonging to God, that you may declare the praises of him who called you out of darkness into his wonderful light” (I Peter 2:9). Therefore, “just as he who called you is holy, so be holy in all you do; for it is written: ‘Be holy, because I am holy'” (I Peter 1:15-16).

We seek our identity not in adapting to the culture around us, but in remaining as God’s set-apart people, “in the world, but not of it.” Our values and standards are often different from those of the culture in which we live. We proclaim and show by example that the way of Jesus Christ is a better way than the world’s way.

Such an identity as a set-apart people requires boundaries that are enforced. That is all that traditionalists have wanted. As a church, we have determined such and such to be our beliefs and practices. Therefore, we expect all leaders and members to abide by what we have decided.

Some have a problem with boundaries because they do not want to exclude anyone. But doing away with boundaries does away with identity. Where there are no boundaries, there is no clear identity. We become part and parcel of what surrounds us – in this case, the culture in which we live. As biblical scholar and theologian James Dunn puts it, “An identity which does not distinguish from others is no identity; a definition which does not define out as well as define in is no definition. … It is the dynamic within bounds, not entirely free from bounds, which characterizes NT theology as it does all Christian theology worthy of its name” (cited by Michael Bird).

Those promoting the “mainline” view of church are partly doing so because they believe only by adapting to culture will the church successfully attract younger generations and those who do not identify with any religious tradition. The track record of other mainline churches is not promising, as they have continued to dramatically decline after taking a more adaptive approach.

In fact, it was the very stark difference of the primitive church of the first three centuries and the Wesleyan revival in England and America that attracted new adherents. People saw something different about the early Christians and the early Methodists, and it was this difference that proved attractive. Who would sacrifice their time or money or even their lives for the sake of belonging to an organization that merely embodies the culture in which they live? The “set apart” vision of the church offers people a higher purpose for which their sacrifices are worthwhile: to live for God, to embody God’s intention for humanity, to serve the world in love, to invite others into this new life, and to prepare for an eternity with God as his sons and daughters.

These two different visions of church, these two conceptions of the church’s identity, cannot coexist in the same structural body. Are we “mainline” or are we “Methodist?” We cannot be both at the same time. The two contradict each other. It may be time for each identity to embody itself in its own church structure. It may be time for us to walk apart.