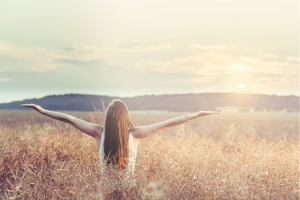 Melissa Stevens, inmate number G30701 to the Florida Department of Corrections, didn’t know anything about the Rev. Kris Schonewolf the first time they met. Until that point, it had been just another day at Lowell Correctional Institution in Ocala, Florida. Stevens was nearing the end of her sentence for grand theft auto by then. She was also turning to God to deal with the inner demons that had spent a lifetime trying to ruin her.

“In prison is where I really found God,” she said. “That’s when I began praying to him.”

She grew up Catholic on the south side of Chicago but admitted, “It was more for show. There was no substance to it all, and it was just something we did every Sunday. I had no concept who Jesus is.”

But when you ask Jesus into your life, as Stevens said she did in 1999, he takes you seriously. You can run from him, but as the line in the contemporary worship song “Reckless Love” by Cory Asbury proclaims, “He chases me down, fights ‘til I’m found …”

Jesus found her in Lowell, and Stevens prayed for someone who could nurture her new-found faith through prayer, the Bible, groups discussions, and so on. That’s when Schonewolf walked by, and Stevens recalled distinctly what happened next.

“A voice inside me said, literally, ‘That’s her,’” Stevens said. “Kris had a light in her; I’ve never seen anything like it.”

Schonewolf was at Lowell to run the Oasis, a prison outreach ministry of the Florida Conference of the United Methodist Church. The program began in 2019 with the support of North Central District Superintendent Rev. June P. Edwards and Bishop Ken Carter. It is designed to shine the light of God into the darkness of incarceration.

“There were some unexpected roadblocks in the beginning —  both with the Department of Corrections and then COVID-19. Yet, again, Kris never gave up,” the Rev. Edwards said.

“Now, she has the confidence of the staff and has developed both name recognition and acceptance among the women. Even though there are difficulties faced every day and unexpected changes in schedule, the women come for all of the offerings provided — worship, Bible studies, guitar lessons, crochet lessons, and the mentoring through the volunteers that write letters. Their lives are impacted in so many ways.”

Schonewolf said her approach is simple. “I just love them with the love of God,” she said. “They’re wounded, hurt, abandoned, and abused. But they are God’s daughters and deserve to be treated with respect.”

An abusive upbringing. Melissa Stevens’ life had been a nightmare until that point. Growing up, she had family members connected with the Chicago Mafia.

“It was nothing for me to walk outside with my mother and see feds taking pictures of us,” she said. She was molested and assaulted starting at age 6. By 14, she joined the Latin Kings gang and a year later had her first child.

She went to jail in Illinois for selling drugs, and then it got worse. “I had nothing,” she said.

Not true. She had Jesus, even if she didn’t understand it at the time.

Jesus kept chasing her down.

She was in jail in Florida’s Bay County on another charge when Category 5 Hurricane Michael struck in 2018. The damage was incredible. Her prison had no running water for about a week, and inmates walked through raw sewage inside the building.

Stevens developed an infection in atrocious conditions and wound up in a coma. Doctors didn’t believe she would survive. But while in the coma, Stevens said Jesus gave her a vision.

“He took me to the middle of the earth to show me the abyss. Walked through a giant corridor, too high to see,” she said. “There was water on both sides. Shapes on both sides, but he protected me.

“Suddenly, I snapped back into my body. Doctors said there was no sign that I was going to come back.” But she did, and her life was about to take a turn from which there is no turning back.

God has huge plans for this girl. The Oasis is literally that, a place of refuge in despair of prison life. It’s a place where the inmates find worth in lives that once might have seemed worthless. 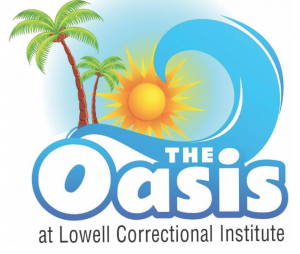 There are seven activities a week, each one about two hours long. They have movie nights three times a month, always with an upbeat theme.

“The women know I’m there for good,” the Rev. Schonewolf said. About 120 women weekly take advantage of the offerings.

“Kris would come in, and those girls would just light up. She had music and spiritual counseling,” Stevens said. “The way she talked about God, you had to listen.”

Stevens was already saved when Rev. Schonewolf met her, but that was just the start of the journey. Kris showed her what it means to be the hands and feet of Jesus. “I was able to work with her, mentor her, go one-on-one with her,” Schonewolf said.

The Rev. Edwards noticed that drive to take Christ’s love to those darkened places filled with damaged people. It’s what made Kris perfect for this task. “From the moment the possibility of this ministry was shared, Kris felt a strong sense that God was calling her to this work,” she said.

“Her spiritual gifts of prayer and healing and outreach, as well as her skills of administration and organization, lend themselves to this unique work. Early on, Kris shared this sense of call with me and never gave up.”

A lot of people gave up on Melissa Stevens. For years, maybe she even gave up on herself, but Jesus never did, and so he sent his servant, the Rev. Kris Schonewolf, to show her just that.

“I’ve prayed her through so much deliverance, spent dozens of hours with her, talked to and prayed with some of her children, watched God completely transform her, watched her struggle, prayed some more, wiped her tears, watched her lay hands on people for healing and deliverance,” she said.

“I watched her being delivered of demonic forces, been there when she had powerful visions from God, seen her preach powerfully. I’ve never believed in anyone’s story more. Yes, God has huge plans for this girl. I can see us doing ministry together when God arranges it.”

Now, look at the change in someone society might have cast away.

“Oasis did so much for me on so many levels. If it hadn’t been for that ministry, I couldn’t honestly tell you where I would be right now,” Stevens said.

“People ask me what my purpose is, and I have no idea at this point. It’s like when you’re packing your bags, and someone says, ‘Where are you going?’ When will you be back? I don’t know.” 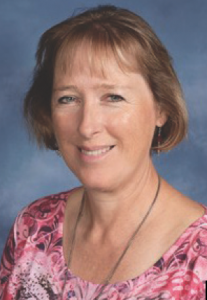 She is out of prison now, working full-time, trying to reunite with her nine children, and living a life of dedication to Jesus.

“I do communion every day. I get to witness to people on my job. I was praying for God to send people to me so I could talk about him. A guy came up and started talking to me about God, and it was like, all right,” she said.

“Whatever God’s purpose is for me, what his assignment is for me, he is revealing one little bit at a time. One thing I do know is that I will never stop talking about him until I draw my last breath. At the end of all of this, it’s all about God.”

Joe Henderson is News Content Editor for the Florida Annual Conference of The United Methodist Church (flumc.org). Reprinted by permission. Find out more about this ministry at www.TheOasisLCI.org. You can also contact Rev. Schonewolf at PastorKrisLCI@comcast.net.