What you should know about the 2022 General Conference 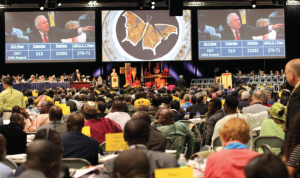 Proceedings of the 2012 General Conference of the United Methodist Church in Tampa, Florida. Photo by Steve Beard.

There’s been lots of speculation about the upcoming General Conference of The United Methodist Church – when it will happen, whether it will happen, what the delegates are likely to do, and what they should do.

This is not surprising. Since 1968 (indeed, since 1792), General Conference is where the buck has always stopped.

Until recently, that is. A big reason we are on the verge of division is because, for the first time since 1792, some folks and groups within the church (including some bishops and even whole annual conferences) have decided that the decisions and policies of General Conference can be ignored or defied. Still, when it comes to legal issues around property, pensions, and liabilities, General Conference has the final word.

But there are even more important reasons why General Conference must meet and soon: to act on the Protocol for Reconciliation and Grace through Separation and end the state of limbo we are all enduring.

For one thing, only General Conference speaks for the whole church. Many voices today are making predictions and pronouncements about the state of the UM Church, about what annual conferences can and cannot do, about what would be just and fair in any division of the church. The problem is that only General Conference – not any bishop, agency executive, or clergy blogger – speaks for the whole church. Only General Conference brings together representatives from every conference across the globe to decide on questions which affect the whole denomination. It is a messy process, to be sure, but the only one which truly gives voice and vote to all the constituent parts of the body.

In addition, only General Conference can create a consistent policy for the whole connection. Did you know that annual conferences have always been able to allow congregations to leave with their property? Even before the disaffiliation clause was added to the Discipline in 2019, annual conferences sometimes suspended the trust clause when a church closed, merged or federated, or simply negotiated to become independent. As a result, individual annual conferences could, if they chose, create their own versions of the Protocol. But this would be a very uneven and uncertain process across the denomination, and likely create inequities depending on the specific culture and leadership of individual conferences. Only General Conference can create a just and fair process that encompasses the whole denomination.

Finally, only General Conference can prevent the church from devolving into bitter conflict and expensive legal battles over property. The bitter polarization of North American culture has infected the culture of the church, and we have seen it play out at annual, jurisdictional, and general conferences. It has not been pretty. But we now have an opportunity to model a different way, even amid our own deep divisions.

Instead of continuing to fight and trying to force each other into complying with our side’s agenda, progressives and traditionalists can choose to bless one another to pursue different visions of ministry in separate institutions. If we cannot agree on “what Jesus would do,” can we at least agree “what Jesus would not do”? – and surely Jesus would not resort to the power of government (enforcing the trust clause) to make people follow and support him. We can choose to minimize the pain and harm of dividing by agreeing to do so amicably and fairly. We can choose to be guided by principles of graciousness, respect, and the golden rule, and preserve some measure of goodwill to allow for post-separation cooperation on areas of common concern.

For those things to happen, we need the General Conference to meet, and to act on the Protocol.

As a member of the Commission on General Conference, I can tell you that we are still working and planning with the expectation that the deferred 2020 General Conference will meet, as announced, next August. Of course, no one knows what international crisis may erupt, or how the ongoing pandemic will evolve – who could have predicted the last year and a half? Both the Commission members and the Commission staff are acutely aware of the importance of having the General Conference meet and getting the church “unstuck” as soon as possible. I can attest to the professionalism and competence of the General Conference staff, which is constantly exploring ways to make General Conference happen. And I can testify that, even with the differences of opinion and theology represented on the Commission, all have worked well together to do our job, which we know is limited to planning and organizing the gathering; it is up to the delegates to deliberate and decide on the issues and policies.

I am hopeful! Many organizations have found ways to “pivot” and adapt these last 18 months in order to conduct business – including a sibling, global denomination, the African Methodist Episcopal Church, which successfully convened a hybrid General Conference this past July. More things are possible today than just six or eight months ago. And of course, all things are possible with God!

Pray for wisdom and discernment for the members and staff of the Commission. Pray that the Lord will soon deliver us from this global plague. And pray that the General Conference will soon meet to resolve the current impasse, adopt the Protocol, and enable a new day to dawn for those of us who follow Christ in the Wesleyan way.