John Wesley and his ”Vital Religion” 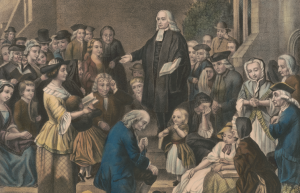 Hand colored lithograph of John Wesley preaching on his father’s grave in the church yard at Epworth in 1742. Currier and Ives artwork. Library of Congress.

“John Wesley and Karl Marx, unmistakably, are the two most influential characters of all modern history,” wrote social historian Dr. J. Wesley Bready (1887-1953) in his colorful and intriguing assessment of the ramifications of the theological and spiritual revival in Wesley-era England. Most recently, Regent College republished Bready’s England Before and After Wesley: The Evangelical Revival and Social Reform, originally published in 1938.

Wesley’s “vital religion” was far more transformative – both individually and societally – than what Marx would have dismissed as the “opiate of the people.” Wesley and his followers addressed issues such as prison reform, education, poverty, health care, human slavery, orphanages, literacy, animal cruelty, and chronic alcoholism. What follows are a few of our favorite excerpts from Bready’s book. –Good News

Passion to be used by God: “Wesley’s supreme purpose was to make men vitally conscious of God. He therefore had no desire to dictate the intellectual niceties associated with the divine work of redemption; rather was he actuated by an impelling passion to be used of God, as a humble but active instrument, in the work of redemption. With prophetic insight he recognized the insidious demons which were luring millions of his countrymen into the tangled labyrinths of moral corruption and spiritual death – and challenging the sway of those demons, he set about to release the victims from their woeful plight. He saw the ecclesiastical machinery of his generation rusty and clogged with dust; he chafed to cleanse it and set it in motion, for the redemption of the general populace. His purpose was not to formulate a new theology or a new theory of Church or State, but to touch dead bones with the breath of spiritual power, and make them live; to release the winds of heaven, that they might blow upon the ashy embers of religion and kindle a purging, illuminating fire of righteousness and truth. He would substitute for the bondage of sin, the liberty, individual and social, of men new-born after the similitude of Christ. He would revive creative, life-giving Faith.”

Attacking the Revival: “During the first two or three decades of the Revival the ugly, riotous interference of mobs was more or less continuous. On innumerable occasions, the meetings of the Wesleys, Whitefield, and many itinerant preachers were attacked by drunken, brawling rabbles armed with such formidable means of assault as clubs, whips, clods, bricks, staves, stones, stink-bombs, wildfire, and rotten eggs. Sometimes they procured a bull and drove him into the midst of an open air congregation; sometimes they contented themselves by performing with bells, horns, drums, pans and such like, to deaden the preacher’s voice. Frequently, when goaded by a violent leader, they resorted to every available means of attack; and not infrequently they expended their fury in burning or tearing down the houses, and destroying or stealing the furniture and possessions, of the Revival’s followers.” 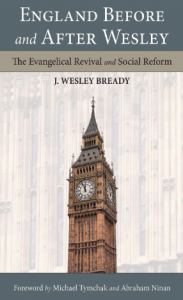 Amazing grace: “Wesley, the Evangelist, was a man possessed of amazing grace. Never did he lose his temper; and always was he prepared to endure a blow, if the dealing of it would relieve the hysteria of his assailant. Repeatedly, when struck by a stone or cudgel, he quietly wiped away the blood and went on preaching without so much as a frown on his face. He loved his enemies; and do what they would, they could not make him discourteous or angry. … In danger, Wesley had taught his followers to think of the Christ before Pilate, of the Son of God before a raging, crucifying mob. Thus it was, that Wesley’s serenity first broke, and later won, the heart of many a mob-leader and ruthless enemy – thus it was, too, that many a one-time brute came to be transformed into a gentle, saintly class-leader and understanding shepherd of souls.”

J. Wesley Bready Ph.D. was a noted sociologist, lecturer, and scholar. These excerpts are from his book Before and After Wesley: The Evangelical Revival and Social Reform (the original edition was published in 1938).