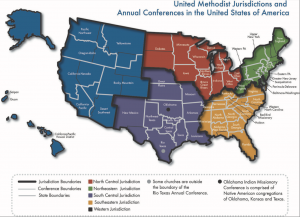 A few weeks ago, the Rev. Adam Hamilton was interviewed by UM News Service on his thoughts about the Protocol for Reconciliation and Grace through Separation. He said, “Generally, the idea of allowing people to graciously exit with their buildings, I think almost everybody has agreed to that.” Hamilton notes this is a significant change from five years ago, when very few were in favor of allowing denominational exit. While he notes that anything can happen at General Conference, he believes this idea would have broad support.

At the same time, Hamilton reports that some have raised “questions” about certain provisions of the Protocol. Some question the feasibility of allocating $25 million to the new proposed Global Methodist Church. Others question the ability of an annual conference to vote to withdraw from the UM Church or would like to see the percentage of that vote raised from 57 percent to two-thirds. In this article, I would like to address the thinking behind these particular provisions.

The Protocol provides that an annual conference may vote to withdraw from the UM Church and align with another Methodist denomination formed under the Protocol based on a vote of 57 percent in favor. This was the very last provision of the Protocol that was agreed upon, and failure to agree on this proposal would have scuttled the whole deal. The 57 percent was a compromise between progressives and centrists, who wanted a two-thirds vote, and traditionalists, who wanted a simple majority.

The idea of an annual conference decision on alignment actually came from the Commission on a Way Forward. The Connectional Conference Plan provided for two conferences within United Methodism, one traditionalist and one progressive/centrist. Annual conferences could vote to align with one or the other, carrying all their local churches with them into that alignment (unless the local church disagreed and took steps to align differently).

This same model was used in the Indianapolis Plan and later in the Protocol, so it is an idea that was broadly accepted across the ideological spectrum.

For instance, the Northwest Texas Annual Conference recently voted by about an 80 percent margin to endorse the Protocol and indicate that it would vote to withdraw and join the Global Methodist Church if the Protocol passed General Conference. If the NWTX Conference were not allowed to withdraw, it could lose more than half its congregations (perhaps as many as 80 percent) to the GM Church. The congregations that would be left would almost certainly not be able to maintain a viable annual conference in the UM Church. The remaining congregations would undoubtedly be reassigned to a nearby annual conference, defeating the whole purpose of not allowing an annual conference to withdraw. Such an outcome helps neither the UM Church nor the GM Church and does not create strong and viable entities to continue ministry and mission in a geographical area.

The question of what percentage vote would be required for an annual conference to withdraw is a sticky one. Those who argue for a two-thirds majority vote say that any major decision by a unit of the church ought to be made by a supermajority vote. Anything less than a supermajority could mean that a church moves forward without the full support of its members, resulting in an adverse outcome.

On the other hand, those arguing for a simple majority vote say that we live in a democratic society, where people are used to accepting the will of the majority. For a small, one-third minority of the church to block the will of the majority could cause major disruption in the church and resentment by those in the majority. (This happened to a large congregation in Houston whose recent attempt to leave the Presbyterian Church fell just a few votes short of the required two-thirds.)

That is why the compromise of 57 percent seems to fit the bill. It is greater than a simple majority, assuring that the decision by an annual conference to withdraw has solid support in the conference. Yet it is not so high as to allow a small minority to block the will of the strong majority. As with many of the terms of the Protocol, this compromise holds in delicate balance competing values. Any attempt to move the percentage one way or the other would upset the delicate balance and potentially damage the entire deal worked out by the various groups.

Some traditionalists perceive attempts to change the percentage or to disallow annual conference withdrawal as an attempt to coerce churches to stay in the UM Church. Any church should be made up of a coalition of the willing, not a coalition of the coerced. One value underlying the Protocol was to provide the fairest and most straightforward way for local churches and annual and central conferences to align with those with whom they desire to identify. Closing the door on some of those pathways undermines the basic values espoused by the Protocol.

Attempts to change the provision allowing annual conferences to withdraw also smacks of a double standard. In the aftermath of the 2019 General Conference, 28 U.S. annual conferences voted not to abide by the recent changes in the Book of Discipline. Annual conferences in the Western Jurisdiction and Denmark began exploring the option of disaffiliating from the UM Church. But now that it is traditionalist annual conferences that would be withdrawing, some want to make it harder or even impossible for that to happen. A good rule of thumb is to treat others as one would like to be treated. If the ability of an annual conference to withdraw from a church that it can no longer support is fair for some, it is right for others with a different perspective.

What about the money?

The other issue raised is whether in Hamilton’s words “the resources are there” for the UM Church to pay out the $25 million to the new denomination. “Does this make sense today like it did before? And for some people it didn’t make sense even then.”

Some consider the $25 million as a subsidy by the UM Church to the new denomination. But the participants in the Protocol saw it as a fair way to allocate the resources that all United Methodists – including traditionalists – have contributed to the church over the past 200-plus years. The amount was not calculated based on the current income of the UM Church, but on unrestricted liquid assets available at the end of 2018, which amounted to $120 million. Of that amount, one-third ($40 million) was to go to the new denominations formed under the Protocol. Traditionalists agreed to contribute one-third of their share ($13 million) to maintain the ethnic ministries and Africa University at their current levels. That left $25 million for the traditionalist denomination and $2 million for a potential progressive denomination.

To take away the $25 million is to say that traditionalists have contributed nothing to the church over the decades. Whereas, in fact, traditionalists have been strong supporters of the mission of the church and contributed to the assets that the church has built up over the years. Allocating $25 million is only a recognition of that fact. It would also allow the new denomination to support ministry in Africa, the Philippines, and Eastern Europe where parts of the church indicate their intent to join the GM Church.

To be fair, if the unrestricted liquid reserves of the UM Church have been significantly reduced by the end of 2021, that is something worth reexamining. On the other hand, perhaps the reserves have increased, and the amount should be greater than $25 million. All traditionalists seek is to be treated fairly and with respect.

In the final analysis, these questions are about grace and preserving the possibility of future reconciliation – perhaps not reunion, but at least the possibility of cooperating together in ministries of mutual interest. We can release and bless one another as we go our separate ways. Or we can fight for every last nickel we think we are owed, creating further animosity between different parts of the Body of Christ. A return to conflict was what the Protocol was designed to avoid. We have the chance to show the world a different, more Christlike way to resolve our differences and bring honor to the name of Christ.