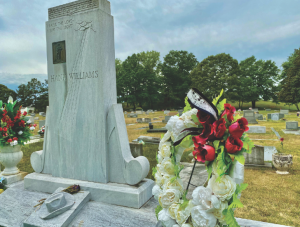 The sun was bright and unforgiving as I paid my respects at the gravesite of Hank Williams on a bluff in Montgomery, Alabama. A cowboy hat would have helped. The heat was a far cry from the dreary night of January 1, 1953, when much of the South was covered in snow and ice at the time of the country music star’s untimely death in the back seat of his 1952 Cadillac on the way to a concert up north. He was 29 years old.

“Praise the Lord – I Saw the Light” is etched into the massive marble gravestone with rays of light descending from the heavens, splicing right through his legendary name. The column is crowned with musical notes. Below, the base of the monument is adorned by a dozen titles of his boxcar worth of hits such as “Your Cheatin’ Heart,” “Lovesick Blues,” “I’m So Lonesome I Could Cry,” and “I’ll Never Get Out of this World Alive.” Hank didn’t just tug at your heartstrings, he yanked them. Yanked hard. Dejection, cheating, and loneliness.

He also wrote loads of gospel songs. “I Saw the Light” was his most famous. No one mistook Hank for a saint, but his fans could relate to his message about one glad morning – someday in the future – when the old will be made new and there will be no more tears or toil. Situated above his first name, there is a relatively understated bronze portrait of Hank playing the guitar with his leg propped up on a bar stool. The lyrics echoed through my mind.

I wandered so aimless, life filled with sin
I wouldn’t let my dear savior in
Then Jesus came like a stranger in the night
Praise the Lord, I saw the light.

“I Saw the Light” was a hymn to remind Saturday night backsliders that Sunday morning was right around the bend. The biographies of Williams are gut-punch reading. There was a lifetime of chronic pain from spina bifida, dejection, morphine, and a distillery worth of liquor involved. There’s no need to try to paint the picture prettier than it was. Like so many of us, he was brutally conflicted between the shiny trappings of this world and the salt-of-the-earth gospel truth that he knew in his heart. Hank could have made a country hit out of St. Paul’s declaration: “I have the desire to do what is good, but I cannot carry it out. For I do not do the good I want to do, but the evil I do not want to do – this I keep on doing” (Romans 7:18-19).

In downtown Montgomery, there’s a stately statue of Hank only a stone’s throw from the storefront museum that houses his pristine Cadillac convertible. Despite its oversized and audacious curves, the backseat seemed disproportionately cramped for Hank’s lanky 6’2 frame. It was difficult to avoid mournfully staring. The museum was well-stocked with irreplaceable memorabilia, video footage, stylized stage outfits, customized cowboy boots, and photos of the heartbroken throng of all races who filled the streets when he died.

Addressing the 20,000 gathered at the Municipal Auditorium in Montgomery for Hank’s funeral, Dr. Henry L. Lyons told the mourners: “Deep down in the citadel of his inner being, there was desire, burden, fear, ambition, reverse after reverse, bitter disappointment, joy, success, and above all love for people.” He said his songs were about the “things everyone feels. Life itself.” Hank was a crooner for the every man. 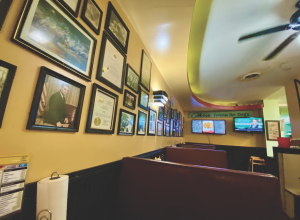 Only three blocks away, Chris’ Hot Dogs was Hank’s favorite place to eat lunch. Locals told me that he wrote “Hey Good Lookin’” from one of the stools at the counter. For more than 100 years, Chris’ has been a refuge for people of all walks of life. Despite angry threats from the Ku Klux Klan, both black and white customers were served even during the segregation era. Christopher Anastasios “Mr. Chris” Katechis, a Greek immigrant, opened the diner in 1917. Over the years, he fed other notable customers such as Elvis, Oprah, a handful of U.S. Presidents, F. Scott Fitzgerald, and Clark Gable.

It’s a bit like walking into a time warp. “We haven’t changed this place in over 70 years,” Theo, the founder’s son, told me. The stools and booths are “beginning to show their age.” After I ordered my lunch, I looked up in my booth and saw an 8×10 autographed portrait of the late Gov. George Wallace. 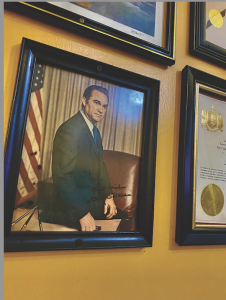 Vintage news footage of his infamous 1963 inauguration speech played through my mind. “Idraw the line in the dust and toss the gauntlet before the feet of tyranny,” Wallace declared, “and I say segregation now, segregation tomorrow, segregation forever.” As I look up at his face, the image in my vision was superimposed by him defiantly standing on the steps of the University of Alabama to block two Black students from attending.

As I would come to discover, I only knew part of his story.

Long before he became nationally known as a segregationist governor, George Wallace (1919-1998) was simply a struggling lawyer who used to go to Chris’ to buy hot dogs and cigars. In an ironic twist of history, Mr. Chris also served civil rights leaders such as Rosa Parks while she waited for the bus and the Rev. Martin Luther King Jr. when he was the young pastor in the 1950s of the Dexter Avenue Baptist Church, a sanctuary in the shadow of the Alabama state capitol.

The portrait of the man peering down at me in my booth was also a perennial candidate for U.S. President. In 1972, there were a dozen Democratic candidates running in the primaries for a race that would eventually pit Richard Nixon against George McGovern. During a campaign stop in Maryland, Wallace was shot five times by an assassin. The attack would leave him permanently paralyzed.

Shortly after his brush with death, convalescing at the Holy Cross Hospital in Silver Spring, Wallace received a most unlikely visitor. 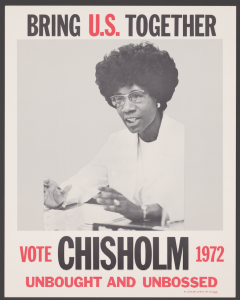 “Shirley Chisholm! What are you doing here?” Wallace asked from his bed. Chisholm was refined, dignified, and decent. She was the first black woman elected to the U.S. Congress and in 1972 became the first African American to run for U.S. President, as well as the first woman to run for the office.

No one was more surprised than Wallace – and her staff – that she suspended her campaign and immediately went to visit her rival. “What will your people say?” Wallace asked. Chisholm responded, “I know what they are going to say. But I wouldn’t want what happened to you to happen to anyone.”

In so many ways, they represented polar opposites fifty years ago. While Wallace was the standard bearer for the Old South and segregation, Chisholm (1924-2005) was a champion of integration, women’s rights, refugees, Native Americans, and the working poor. There were few things they had in common, other than their humanity – and they were both United Methodists. They held hands and prayed together.

The medical staff asked her to end their visit because Wallace was very weak. “He held on to my hand so tightly,” Chisholm recalled, “he didn’t want me to go.”

Congresswoman Barbara Lee was a young and idealistic campaign worker for Chisholm in 1972. She was confused and upset about the Wallace visit. In a recent interview with the Washington Post she recollected how Chisholm told her, “Sometimes we have to remember we’re all human beings, and I may be able to teach him something, to help him regain his humanity, to maybe make him open his eyes to make him see something that he has not seen.”

In a speech a year after the hospital visit, Chisholm, a member of Janes United Methodist Church in Brooklyn, asked, “Are we ready to learn to deal with others as God has dealt with us? God gave us life at the risk of our rebellion and paid for reconciliation at the price of the cross.”

Back in Montgomery, Wallace arrived at Dexter Avenue Baptist Church on a Sunday morning in 1979 unannounced and unexpected. Without fanfare, an attendant rolled his wheelchair to the front of the sanctuary. “I’ve learned what suffering means in a way that was impossible,” he told the African American congregation. “I think I can understand something of the pain that black people have come to endure. I know I contributed to that pain and I can only ask for your forgiveness.” As he left the sanctuary, the congregation sang “Amazing Grace.”

More than twenty years before Wallace found himself before the Dexter Avenue congregation, it was the Rev. Martin Luther King Jr. who said in 1957: “Forgiveness does not mean ignoring what has been done or putting a false label on an evil act. It means, rather, that the evil act no longer remains as a barrier to the relationship. … While abhorring segregation, we shall love the segregationist. This is the only way to create the beloved community.”

Shirley Chisholm did not have to approve of George Wallace’s politics in order for her to refuse to allow a barrier or a bullet to stand between them. Her faith would not allow it. A whirlwind of change took place in the man whose portrait I saw in the booth at Chris’ Hot Dogs. The news reel footage and the bitter words would never paint the whole story. Wallace was a four-term governor who sought forgiveness and ended up winning 90 percent of the African American vote during his last campaign. 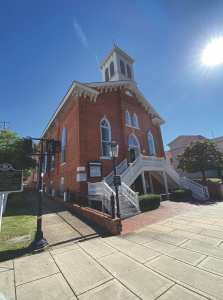 Upon Wallace’s death, civil rights legend John Lewis wrote a moving essay in the New York Times. “With all his failings, Mr. Wallace deserves recognition for seeking redemption for his mistakes,” he wrote, “for his willingness to change and to set things right with those he harmed and with his God.” Perhaps one of the most poignant of illustrations of Wallace’s transformed life was the attendance of Vivian Malone and James Hood, the two black students Wallace tried to bar from the University of Alabama in 1963, at his funeral.

My mind often returns to the bright sunshine on the bluff in Montgomery. A verse from “I Saw the Light” comes into clearer focus.

Just like a blind man, I wandered along
Worries and fears I claimed for my own
Then like the blind man that God gave back his sight
Praise the Lord, I saw the light.