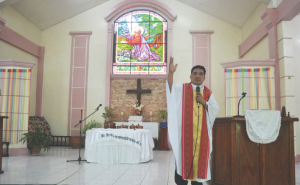 The Rev. Dr. Jonathan Razon addressed the 2021 Global Gathering of the Wesleyan Covenant Association remotely from The Philippines because of travel restrictions due to the pandemic. Photo courtesy of Dr. Razon.

Martin Luther changed the course of human history in 1521 when he was twice brought before the Holy Roman Emperor Charles V and was told he must take back all of his teachings. As we all know, Luther refused to recant. “Unless I am convinced by Scripture and plain reason – I do not accept the authority of popes and councils because they have contradicted each other – my conscience is captive to the Word of God. I cannot and I will not recant anything, for to go against conscience is neither right nor safe. So help me God. Amen.”

Regrettably, we all know that throughout church history there have been tyrants and bullies who have abused their powers to manipulate and deceive God’s people. So, what was the source of Luther’s faith and fearlessness to stand up to the Holy Roman Emperor and the power of the papacy, the tyrants and bullies of his day? How was it that an obscure monk from the countryside was able to courageously speak the truth and launch the Reformation?

The source of Luther’s fearlessness was his rediscovery of the primacy of sacred Scripture and the essential truth of the gospel, namely, our justification by grace through faith in Christ alone. The gospel freed him to speak the truth to the political and religious powers of his day.

Luther was convinced that the truths revealed in the Scripture and the Church’s great creeds are timeless. They are truths that inform our moral and ethical teachings, and consequently shape the good ordering of church and society. Luther knew that in order for the church to fulfill its mission, its leaders must teach, defend, and model in their daily lives the lifesaving and life-giving ethical teachings rooted in Scripture and the Church’s creeds.

Without such leadership and fidelity, the church loses its way; leaders and people begin to do “what is right in their own eyes,” and if chaos is not corrected, confusion will reign among the faithful. Unfortunately, we have witnessed this happen in the recent histories of some Christian denominations.

With this in mind let me turn to those once timid, but ultimately fearless, apostles Peter and John who boldly preached the truth of Christ’s resurrection. In Acts 4, we see the high priest, the elders, and the scribes – the religious authorities of their day – question and bully them, treating them like common and ignorant followers of a crucified criminal. However, even though Peter and John were thrown in jail and reviled, they were not intimidated. They were fearless in their defense of the gospel.

Where did Peter and John get their fearlessness? Of course, they had recently seen and spoken with our risen Lord. Yet, they still needed to be filled with power of the Holy Spirit to make their bold defense before the religious authorities.

After the Apostles are questioned about their preaching and the healing of a crippled man, Luke writes, “Then Peter, filled with the Holy Spirit, said … ‘Rulers and elders of the people! … It is by the name of Jesus Christ of Nazareth, whom you crucified but whom God raised from the dead, that this man stands before you healed’” (Acts 4:8, 10).

Christ’s resurrection and the infilling of the Holy Spirit gave Peter and John the courage to bear witness before leaders who could have turned them over, as they did Jesus, to the Roman authorities. But they did not do that. Instead, the Bible says that even though the religious authorities still regarded Peter and John as “unschooled, ordinary men,” they now recognized the two men’s “courage” (Acts 4:13).

How can we be courageous and fearless in the places where God has called us to serve? Surely the experience of having just recently seen our resurrected Lord and talked with him gave them confidence to stand before the religious authorities. But then I think of what Jesus said to doubting Thomas after he had given him the opportunity to touch the scars on his hands and the wound on his side. Our resurrected Lord said to Thomas, “Have you believed because you have seen me? Blessed are those who have not seen and yet believe.” And since all the disciples were in the room when Jesus spoke those words to Thomas, I like to think Jesus’ words were for all of them.

Jesus was also thinking of you and me when he said those words to the disciples. He knew that when it is our time to be fearless, we must do it by faith alone and trusting that the Holy Spirit will fill us with courage and wise words. It is not always an easy thing to do. Writing to the early church, Peter said in his first letter, “though now for a little while you may have to suffer grief in all kinds of trials. … Though you have not seen him, you love [Jesus] and even though you do not see him now, you believe in him and are filled with an inexpressible and glorious joy, for you are receiving the goal of your faith, the salvation of your souls!” (1 Peter 1:6, 8-9).

Wherever we live in the world today, Christians are realizing we must become more courageous and fearless in the face of everything from insults to outright persecution.

Our principal model is of course Jesus himself, who as the Truth always taught it and defended it. He did so with compassion and pity for those who denied the truth. Even from the cross Jesus cried out, “Forgive them for they know not what they do.” Jesus demonstrates for us that our battles are not against people who make fun of us, who revile us, or who may even persecute us, but they are with powers and principalities beyond this world. We must discern and learn what Christ-like courage and fearlessness looks like as we face our circumstances.

Like Peter and John, we must be happy warriors who actually exhibit fearlessness and courage for the sake of our enemies, not simply to defeat them. Because when we read Acts 4, we can tell that Peter and John are first and foremost declaring the truth because they want people to know the truth for their own good. They know it leads to life.

The Rev. Dr. Martin Luther King, Jr. preached and modeled boldness for us in the great Civil Rights movement in America. His witness, and the witness of so many others, was steeped in the courage and fearlessness of Jesus and the Apostles. They stood for the gospel truth in the face of those who not only belittled and slandered them, but they stood for it even in the face of those who beat them and murdered them. By displaying Christ-like characteristics, they not only added people to their ranks; they even won over many of those who had yielded up their hearts and minds to the dark powers and principalities of hell.

Continuing the Wesleyan Vision. We Filipinos, like people all around the world, were inspired by the courage and fearlessness of Dr. King and the many brothers and sisters who followed in the footsteps of Jesus and the Apostles. They demonstrated for us what our Christian courage and fearlessness must look like when people belittle our faith, attack our beliefs and ethical standards, and even persecute us for declaring that Jesus Christ is the way, the truth, and the life.

Recently over three hundred Filipinos (myself included) signed a statement entitled, “Continuing the Wesleyan Vision: A Call to Unity in Holiness and Truth.” Those who signed the statement are clergy and laity from all over the archipelago of the Philippines and even Filipino migrants in diaspora – those living in the Middle East, Europe, and North America, or wherever they can find work to support themselves and their families.

As signatories we are all painfully aware of the decades-long dispute that has undermined the health and vitality of our denomination. As United Methodists who love to share the good news of Jesus Christ in both word and deed, we are very troubled that some clergy and bishops in the United States are unwilling to promote and defend the Holy Bible and our church’s teachings that are grounded in it.

We are very disappointed that, at our special 2019 General Conference in St. Louis, some U.S. clergy and bishops openly said they would defy the will of our global General Conference. Additionally, we are also very disappointed that after that conference some U.S. clergy and bishops took out full page ads in major U.S. newspapers belittling what we Filipinos believe, and the teachings that our UM Church had just reaffirmed. Their willingness to do these things has sown the seeds of confusion in the Philippines and undermined our courageous witness to the teachings of The United Methodist Church.

Therefore, as Filipino United Methodists who hold to the primacy of Scripture, we believed it was necessary for us to boldly say we are committed to our church’s teachings regarding marriage, sexual ethics, and ordination that are rooted in Scripture. These beliefs have been taught by the church universal for almost two thousand years, and they are affirmed by the vast majority of Christians the world over.

Our passion is for spiritual vitality, accountability to the life-giving teachings of our faith, and for doctrinal integrity. We want to continue to reach our young people with the good news of Jesus Christ. We do not want to lose them to other evangelical denominations in our country or, even worse, to a secular culture with permissive and destructive values. We envision the birth of a new Global Methodist Church that is committed to discipling our young people, and dedicated to bringing Filipinos to the saving work of Jesus Christ.

We hope to recapture the Spirit-filled passion of the early Methodist movement in the British Isles, North America, and especially that of our Filipino forebearers. We want to recapture that passion and adapt it to new ways of evangelizing and discipling people towards Christlikeness in the 21st century. We hope and pray for the creation of the new Global Methodist Church – a faithful continuation of the original vision of Methodism to “spread scriptural holiness throughout the land!”

As a small country representing small annual conferences, our challenge will be great as we take our stand for God’s truth as it is revealed in the Holy Bible. But it is not relative truth or subjective truth; we believe it is the Truth! It is always true, no matter the region or place. Despite the challenges, we Filipinos will courageously and fearlessly take our stand with Jesus Christ, who is the Truth for all time.

Jonathan Razon is a United Methodist clergyperson and the senior pastor at The Living Faith United Methodist Church in Murong, Bagabag, Nueva Vizcaya, Philippines. In addition to being a pastor, teacher, and human rights worker, Dr. Razon served as a delegate to the UM Church’s 2016 and 2019 General Conferences. This article is adapted from his address to the Wesleyan Covenant Association’s Global Gathering in April.