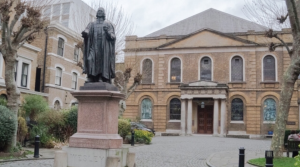 On Wednesday, the British Methodist Church became the largest denomination in Great Britain to endorse same-sex marriage. The overwhelming vote follows the acceptance of an initial report in 2019, God in Love Unites Us, followed by two years of discussion across the church’s 30 districts.

According to the BBC , “the Methodist Church is Britain’s fourth largest Christian denomination with about 164,000 members across more than 4,000 churches.” (British Methodism is a totally separate denomination from The United Methodist Church.) Methodists represent only about two tenths of one percent of the British population, whereas United Methodists in the U.S. represent about two percent of the population. In offering same-sex marriage services, Methodism aligns with other relatively small denominations in Britain, such as the Scottish Episcopal Church, the United Reformed Church, and the Quakers.

The two largest denominations, the Church of England (more than 16,000 churches) and the Roman Catholic Church (3,700 churches), do not accept same-sex marriage. Methodism will also be out of step with other British denominations, such as Baptist, Pentecostal, Orthodox, House Churches, and independent congregations.

The Church Times quotes the adopted resolution as saying, “The Conference consents in principle to the marriage of same-sex couples on Methodist premises throughout the Connexion and by Methodist ministers, probationers or members in so far as the law of the relevant jurisdiction permits or requires and subject to compliance with such further requirements, if any, as that law imposes.”

BBC reports, “Church officials hope the dual definition will persuade conservative churches not to leave and protect ministers from discrimination claims if they refuse to marry gay couples.” The newly elected President of the Conference, the Rev. Sonia Hicks, said in response to the vote, “The debate today and our wider conversation has been conducted with grace and mutual respect. As we move forward together after this historic day for our Church, we must remember to continue to hold each other in prayer, and to support each other respecting our differences.”

The Rev. Sam McBratney, chair of the Dignity and Worth campaign (a pro-LGBTQ advocacy group in the Methodist Church), said, “We reassure those who do not support this move that we want to continue to work and worship with you in the Church we all love.”

In order to live together and “work and worship” together in one continuing church, the British Methodist Church had to adopt an inherently contradictory policy. It now has two definitions of marriage that are simultaneously in effect. The result is that the Methodists have no coherent definition of marriage. It can mean whatever its members want it to mean.

This tactic in attempting to maintain some sort of unity is common across the world among denominations that are changing their standards on marriage. Most see it as an interim step to allow the “conservatives” to eventually change their minds, leave the church, or die off, until the church can unify around the more progressive marriage stance.

However, some traditionalists in Britain will be unable to live with the contradiction. The BBC reports Carolyn Lawrence, a former vice-president of the Methodist Conference, warned there was a “significant minority” of Methodists who were “planning on leaving or resigning their membership” as a result of the vote. “Today is a line in the sand for many people and seen as a significant departure from our doctrine.”

Methodist Evangelicals Together, a renewal organization within the British Methodist Church, advocates for “the original Wesleyan evangelical vision and the biblical and apostolic understanding of marriage as the life-long union of one man and one woman and the only appropriate context for sexual intimacy.” They report, “Sadly, several members, Local Preachers and Ministers, and even entire congregations, have already left the Methodist Church [in Britain] over the direction of travel it has so far adopted. If the proposals are ratified at Conference 2021, there are likely to be many more who will feel conscience-bound to leave.” There has even been some preliminary interest in traditionalist British Methodists possibly becoming part of the Global Methodist Church when it forms after adoption of the Protocol.

While the changing definition of marriage made the headlines, the British Methodist also overwhelmingly adopted a resolution “to recognise, accept, and celebrate the love and commitment of unmarried cohabiting couples.” This action is the natural outgrowth of rejecting the clear witness of Scripture regarding the God-given boundaries for human sexuality.

Once one sets aside scriptural teachings about marriage and sexuality and substitutes human reasoning and feelings, there is no limit on what can be found acceptable or even affirmed. Whatever seems right to people will become the governing standard. For example, there is no reason in principle why marriage could not be expanded to include more than two people under this approach.

Meanwhile, in The United Methodist Church, the General Council on Finance and Administration has voted to expand the data collected on annual church membership reports. Where members are classified as either male or female, a third option will be added – “non-binary.” This third category will encompass those who do not identify as either male or female.

According to United Methodist News Service, the change affects only churches in the U.S., as the church does not collect local church statistics for churches outside the U.S. However, GCFA will also request U.S. annual conferences to report the number of non-binary clergy in their annual records.

“The board made the change after hearing from U.S. annual conference treasurers who have responsibility for collecting membership data from local churches,” reports UMNS. “We are having issues reporting people with pastors calling our office and saying: ‘What do I do here?’” said Christine Dodson, North Carolina Conference treasurer and the GCFA board’s vice president. “Quite frankly, I’ve had a pastor tell me, ‘I’m not going to force a person to choose one or the other when they have told me how they identify.’”

Only one board member spoke against the proposal. “I’m appreciative of the recognition of all God’s people, but I am also cautious that we are making a decision that appears to affect less than half our global constituency,” said the Rev. Steve Wood, who is also lead pastor of Mount Pisgah United Methodist Church in Johns Creek, Georgia. “I’m just wondering if we are creating more angst than we are creating benefits, so I have to speak against it.”

GCFA may have thought of this change as merely an administrative accommodation to make pastors’ job easier. However, by making this change, GCFA has implicitly endorsed a theology of gender that appears at odds with the simple and basic scriptural witness: “male and female he created them” (Genesis 1:27).

Admittedly, there is nothing in the Book of Discipline that speaks specifically to issues of gender identity. This topic is so new that it has not been adequately studied or addressed by the church. That is why it seems unwise for GCFA to make such an “administrative” change that represents a theological understanding that has not been thoroughly thought out.

The trajectory of the British Methodist Church and the easy acquiescence of GCFA to a progressive understanding of gender identity shows the potential direction a post-separation United Methodist Church is likely to take. The GCFA decision reflects how the regionalization of the church might work, with decisions made that apply to some parts of the church and not other parts. Those who are uncomfortable with such a direction, recognizing that it reflects a different understanding of scriptural authority and theology, will need to find a new home – hopefully in the Global Methodist Church (in formation).