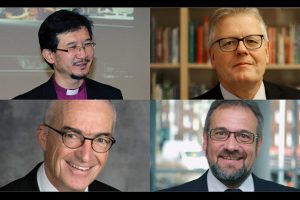 Just this week, the four bishops of Europe and Eurasia announced plans to handle the possibility of separation in The United Methodist Church and the unique ways it might affect their three central conferences. (The United Methodist News story contains links to their useful planning documents and statement.)

Khegay, who leads United Methodists in Russia, Belarus, Kyrgyzstan, Moldova, Ukraine, and Kazakhstan, plans to join the proposed new Global Methodist Church (GMC) after the Protocol for Separation passes General Conference, along with the annual conferences in his area.

Alsted, Rückert, and Streiff have all indicated that they plan to remain United Methodist and will welcome a diversity of views. Some annual conferences and even local churches in their areas may also decide to join the proposed GMC. Alsted participated as one of the diverse group of 16 United Methodist leaders who, with the help of famed mediator Kenneth Feinberg, developed the Protocol.

The three central conferences (Central and Southern Europe, Germany, and Northern Europe and Eurasia) cover 32 countries and 10 time zones, according to UM News. As of 2019, the three conferences had a total of 52,334 professing members and 1,052 active and retired clergy. Streiff emphasized in the press release “how diverse the context for the mission of the church is related to State legislation, dominant Christian church or Muslim faith, and many other issues.” Some countries have a state church, while others do not. Some countries require legal registration. Some annual conferences own all local church property. In other countries, local churches are owned by the local church or even private individuals.

The goal of the bishops’ efforts, working with their respective central conference leaders, is “to initiate conversations about potential implications of a separation and processes to lead the church through this time into a vital and sustainable future.” “We cannot just sit on our hands and wait until after General Conference has acted,” said Alsted. “We need to think and prepare proactively for the future and work for as much unity and missional strength as possible, while we ensure that all local churches, clergy, and annual conferences are able to live into the future with integrity.”

Significantly, the four bishops affirm, “The petition on the Protocol has a good chance to be adopted (with or without amendments), and it does not need constitutional amendments.” (That means it can go into effect immediately without waiting for annual conference ratification, unlike the Christmas Covenant, which would require a two-thirds vote and annual conference ratification.)

The bishops acknowledge “the need for changes in the timeline because of the postponement of General Conference.” They further state, “there is ongoing discussion about ‘renegotiating’ the Protocol, but as European bishops we see this as a dangerous play where there will not be a better solution in the end than the compromise of the Protocol.”

Throughout their documents, the bishops provide clear information on what is to be expected at General Conference, what some of the possibilities are, and how those possibilities might affect their central and annual conferences. Such clear information is needed to help allay the anxiety and frustration of many members in the U.S. and elsewhere, as well as to prepare members who have not received this information before.

The bishops prepared a separate document, On Separation from The UMC, that contains clear and step-by-step information for annual conferences and local churches considering separation from the UM Church in order to align with another denomination under the Protocol, as well as for churches wanting to withdraw and become independent. This document will obviously need to be updated based on any actions or amendments taken by General Conference, but having this information clearly put forward by the bishops themselves helps to build trust and provide reassurance.

Already, the bishops have established tentative dates to meet with their respective central conference executive committees in 2022 in order to further prepare for General Conference.

The bishops have formed a Working Group “to prepare for the work that will need to happen in Europe following the General Conference in September 2022 with a perspective toward a common vision for all branches of Methodism in Europe.” This group will give a preliminary report to the central conference leaders in spring of 2022 and a final report to all delegates before August 1, 2022, in time to inform deliberations at the 2022 General Conference beginning August 29.

This group will study the various proposals coming before General Conference, including the Protocol and the Christmas Covenant, as well as other proposals that would significantly affect the church in Europe. They will seek to develop a common approach to handling the outcome of one or more of these proposals passing General Conference, as well as how relationships between the various branches of Methodism might continue in Europe following separation. This kind of preparation work will help position the church to respond in a timely and effective way following General Conference to whatever course is chosen in Minneapolis.

Each central conference has been tasked with developing a guide for its members on “what it means for an annual conference to remain in or to leave the ‘Post-separation UMC’ according to the Protocol.” They will develop detailed descriptions of the necessary steps, timelines, and implications for those desiring to separate, as well as those desiring to remain in the UM Church. Such detailed information will aid annual conferences in making their decision about alignment after General Conference.

Based on the remaining membership of the UM Church in Europe, this task force would study the alternatives and make proposals that could then be carried to the next General Conference in 2024 (or 2025). Europeans would therefore have a proactive voice in how their church would be structured moving forward. Such forward thinking can only serve the post-separation United Methodist Church well, as it prepares for a new reality.

The proposals of the four bishops and their central conference leadership teams is a hopeful sign for arriving at a faithful and fruitful future in Methodism. “It is a very strong signal that our three central conferences in Europe seek to move forward together,” emphasized Rückert. “In spite of different opinions within our central and annual conferences and in spite of possible different decisions on our ways into the future, we attempt to have honest and respectful, courageous and future-oriented conversation.”

This is an example of how bishops and leaders with very different perspectives can still help the church prepare for the likely event of separation. They can do so in a number of ways:

•  Prepare and distribute clear information on the process of decision-making around separation, with no punishment for pastors who inform their congregations about the issues and options involved.

•  For those remaining in the continuing UM Church, thinking through the optimal size of an annual conference and how many bishops the church can afford and that would facilitate mission effectiveness.

•  Those who are working on the Global Methodist Church are already beginning to think through these issues and questions, coming up with tentative proposals that are not set in concrete and could respond to whatever the outcome is after the 2022 General Conference.

This is the kind of proactive leadership we need from all our bishops. It is not helpful for bishops to seek to control their preferred outcome for an annual conference by withholding information and trying to bully clergy and congregations into supporting that preferred outcome – whatever it might be. These decisions affecting the future of annual conferences and thousands of local churches need to be made in an open and transparent way with the input of grassroots United Methodists. Only then will people be satisfied that the decisions are fairly made and be willing to carry them out amicably.

We have the choice of going through separation in a confrontational and combative way, like all the other mainline denominations that poured tens of millions of dollars down a legal rat hole. Or we can demonstrate to the world that we know how to graciously and respectfully resolve our differences in an amicable way. The European bishops have shown us how. Here’s hoping other bishops will get on board and emulate them.