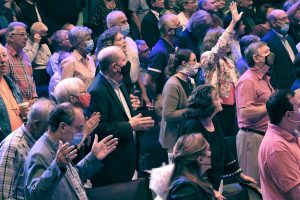 The Wesleyan Covenant Association met in person and online April 30-May 1, continuing to plan for a new, traditionalist Methodist denomination and passing a resolution criticizing three United Methodist bishops for recent appointment-making decisions.

Many at the WCA’s fifth Global Gathering were clearly excited at the prospect of leaving the big tent of The United Methodist Church for a denomination they say will stress evangelism, scriptural authority, historic Methodist practices and a traditional understanding of marriage as between one man and one woman.

But the meeting, held at Frazer Memorial United Methodist Church in Montgomery, also had an air of frustration. COVID-19 has pushed back to 2022 the United Methodist General Conference at which a proposed separation will be considered.

“I get discouraged at times,” the Rev. Keith Boyette, WCA president, said during his May 1 address. “But I’ve learned God does amazing work while we’re waiting.”

The WCA formed in 2016, and while strongly aligned with older traditionalist groups in The United Methodist Church, such as Good News and the Confessing Movement, it has become the incubator for a planned new denomination recently given the name Global Methodist Church.

Boyette joined a diverse group of church leaders in negotiating the Protocol of Reconciliation and Grace Through Separation, aimed at dealing with decades of division in The United Methodist Church over how accepting to be of homosexuality. Traditionalist churches would, under the proposal, be able to leave with their properties and form their own denomination, getting $25 million to start.

But the protocol was unveiled in January 2020, and General Conference has been rescheduled twice since then due to COVID-19, with the current dates set for Aug. 29-Sept. 6, 2022, in Minneapolis.