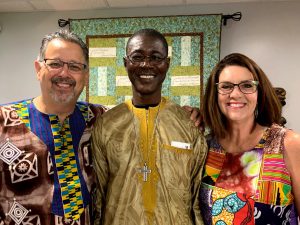 The Rev. Jorge Acevedo and his wife Cheryl flank Bishop Lawrence Beka of the Methodist Church Ghana at the 2019 missions conference at Grace Church in southwest Florida. Photo courtesy of Grace Church.

Nearly 20 years ago, Jorge Acevedo had an epiphany. He’s the lead pastor at Grace Church, a multi-site United Methodist congregation in Southwest Florida. At the time, his church was one of the fastest growing United Methodist congregations in the United States. “Our local mission was on fire. I mean, we were doing great things,” he said. “But we were what I now call a Jerusalem-only church. We were only obeying one portion of Acts 1:8.”

In 2001, a lay leader suggested the church participate in what is now called Activate Training, led by TMS Global. The program aims to help churches discover and live out their unique missional calling. Participants learn what the Bible says about missions, the state of the world as it relates to God’s mission, and what shifts in thinking the church needs to make in order to deeply engage in missions.

Towards the end of the two-day workshop, Acevedo said the Holy Spirit broke him. The next morning, he told his congregation, “Your pastor needs to confess a sin to you. We’ve been red hot for our community, and we’ll continue to do that, God being our helper. But we need to get God’s heart for the world. So let’s go!”

That was on September 9, 2001. A couple of days later, Acevedo watched on TV as planes flew into the World Trade Center. “It was as if God was saying to me that this is why we need to go to the ends of the earth,” Acevedo said. “Because this world will never know peace until all people know the Prince of Peace.”

Now, 20 years later, in the midst of a global pandemic and other crises, it’s as important as ever for the Church to introduce the world to the Prince of Peace. That’s why the Rev. Reginald Belton, senior pastor of First Baptist Church of Brownsville, in Brooklyn, New York, decided to move forward with Activate Training, rather than wait until the coronavirus pandemic was over.

“I just believe we can’t turn inwardly,” Belton said, “because when we do that, we shut out everyone else. And outreach is what we’re here to do. In the Great Commission Jesus never said that everything has to be perfect for you to go forth and make disciples. You just have to go forth.”

The church is located in an area with a high concentration of public housing. Belton says the neighborhood also has high rates of crime and violence. “Inner-city ministry is a lot different than doing ministry in the south, or outside of the inner city,” Belton said. “Urban ministry is much different. In the inner city, the door-to-door stuff doesn’t work anymore. So I was looking for a way that we could be effective in our community, but also reach beyond our borders.”

First Baptist Church of Brownsville was established in 1925 and has been in its current location since 1954. Membership has fluctuated throughout the years but now sits at more than 200 people.

“We’re growing again, doing some exciting stuff,” Belton said. “But missions and evangelism have been lacking. We wanted to figure out how we could get out there and do it but do it in a very organized and systematic manner, where we were effective.” Belton and members of his congregation participated in Activate Training this past October and November. The sessions were held via video-chat over several weeks. 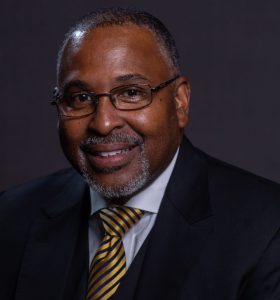 Belton says the training helped him and his team create a focused, systematic approach to outreach. “We had great things we wanted to do,” Belton said. But the challenge for the church was organizing strategic goals. “So that’s what TMS Global has done for us. They really helped us organize so that we’re not just blasting all over the place with no plan. We have a focus, and we’re moving toward that goal to do local, state, city, country, and worldwide mission and evangelism.”

Belton says his church also learned how to effectively partner with others. “We don’t have to go it alone. It’s much too big,” Belton said. “That in itself took away anxiety, knowing that we would have partners and people to join in this mission and evangelism with us. And those are people who are experts at doing it, who’ve been doing it a long time.”

Sonji Pass, TMS Global’s regional director of Church Culture, said the process works because it’s bathed in prayer. “I think it’s so easy to go into an area and immediately want to respond to its needs, and then say, ‘Oh yeah, Lord, will You bless what we’re doing?’” she observes.

Instead, those participating learn to begin with strategic prayer, to ask specific questions and listen for the Lord’s response. This kind of praying happens throughout the entire process. The Activate Training is followed by a season of coaching that lasts one-to-three years. TMS Global staff have begun to mentor Belton and his team, helping them create a focused plan for making missions the core of everything his church does.

“Our coaching is not prescribed,” Pass said. “We have a general outline, a structure, that we present, but then we allow the Lord to fill in. The rest just depends on what the church’s mobilization team responds to, and what they sense the Lord would have them do in their particular context.”

It’s been nearly two decades since TMS Global finished the coaching process with Jorge Acevedo and Grace Church in Florida. In the years since, he says his congregation has raised millions of dollars for missions, sent thousands of people on mission trips, and participated in countless hours of prayer. “I’ve watched as our people have moved into the neighborhoods of the world and seen their lives changed,” Acevedo said.

As part of the training, churches learn how to raise more money for missions through faith promise giving. Each individual prays and asks God what dollar amount he would provide for them to give. They then pledge that amount, and trust God to provide.

Rhonda Dahlin, also a regional director of Church Culture, reported that some churches raise three, four, or even ten times the amount of their previous missions budget in one year by following the faith promise plan. “We are not called to go and do something in our own effort,” Dahlin said. “We’re called to respond to what God is saying He is going to do through us. So applying that also to our giving is the principle behind faith promise.”

Acevedo says his congregation’s giving to faith promise has actually increased during the coronavirus pandemic. Although his church completed the coaching process with TMS Global close to 20 years ago, he says saying “yes” to the mission of Jesus requires constant, ongoing work and a willingness to innovate.

Acevedo says he’s had to innovate throughout the coronavirus pandemic. But he’s continued to focus on missions, because the needs of his church’s mission partners have increased, not decreased.

And what about after the pandemic?  What then? “Many pastors are looking around at nearly empty pew seats – or fewer people logged on to online services – and wondering what their church will look like this time next year,” said Sarah Parham, senior director of Domestic Mobilization for TMS Global. “They’re asking, ‘Who will we become?’”

“When the church emerges from this pandemic it will be different,” says Dahlin. “And we have to emerge as a missional church. We have to have a missional outlook. If we’re not missional as churches, we are going to accelerate our decline, especially in the U.S.”

“Loving our neighbors and transforming our communities has never been more vital,” says the Rev. Carolyn Moore, lead pastor of Mosaic Church in Evans, Georgia. She agrees that, unless things change, the American church may be headed into a time of decline. “These have been defining days for so many people, and when we emerge from this, many will struggle to regain faith and energy for Kingdom work. The lack of discipleship and worship for so many over such a long period is going to take its toll.”

But, she notes, there’s still hope. “There is so much potential for being a positive force and voice in our communities, and I believe most communities are starving for that kind of voice. If we emerge with a missional voice that is married to strong, intentional discipleship, we could well look back on this season as the time when the Church got serious about advancing the Kingdom of God.”

Belton with First Baptist Church of Brownsville says Christians can be expanding the Kingdom even now. “This is a great time to do it because people are looking for answers. People are desperate. So I would encourage churches to jump in now, because this is the time that we’re going to have our greatest impact!”

He says he’s looking forward to leaning into the coaching process and putting what his church learns into action. “I thank God for TMS Global. I really do,” he says. “It’s going to be exciting.”

Jorge Acevedo says he encourages more churches to utilize the resources offered by TMS Global. “You’ve got nothing to lose,” says Acevedo. “And who knows? You might have your own ends-of-the-earth epiphany as I did. Or, as I tell my people around here, Jesus will wreck your life, and you’ll love it.” Acevedo says.

Jenifer Jones is a writer who focuses on telling stories about the work God is doing in the world. She’s also a poet. Find her writing at www.jeniferjones.com.

There’s no cost for TMS Global’s Activate training and coaching. If churches find value in the resources, they are encouraged to pay it forward so that other churches can participate. For more information about resources offered by TMS Global’s Church Culture Department, visit www.tms-global.org/churches.