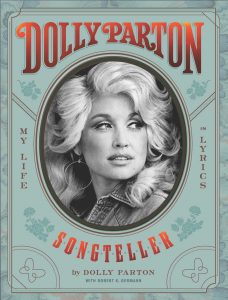 I spent the holidays with Dolly Parton.

Well, not literally. Like everything else in 2020, it was all virtual – and it was a whirlwind.

Throughout her rhinestone-studded career, Dolly has sold over 100 million albums, starred in countless movies and TV specials, launched an extraordinary book-gifting program, opened a theme park that attracts more than 3 million visitors per year, and has written over 3,000 songs. More than 200 of her songs have been covered by other artists.

One of twelve children, Parton was born in a log cabin in East Tennessee without electricity. At 74 years old, her literal rags-to-riches story continues to inspire fans across the spectrum around the world. Despite finding tremendous popularity under the bright lights of country music, Dolly’s magnetic folksy appeal has always extended far beyond Nashville.

During the holiday season, she was featured in a Netflix musical, released a joyous Christmas album, seemingly appeared on all the network television holiday specials, and accepted the “Hitmaker” award at the Billboard Women in Music ceremony. Oh yeah, she also helped fund the Moderna Covid-19 vaccine.

“I may look like a show pony,” Dolly has famously said, “but I am a workhorse.”

Also released over the holidays was Dolly’s book Songteller: My Life in Lyrics – a 380-page collection of photographs and behind-the-scenes insights from dozens of her most well-known songs. At thirteen years old, none other than Johnny Cash introduced her to the crowd at the Grand Ole Opry. Dolly provides backstory snippets regarding famous collaborations with Porter Wagoner, Willie Nelson, Carl Perkins, Merle Haggard, and Kenny Rogers.

Fans know that Dolly had to make a heartbreaking decision to turn down Elvis’s request to record – and own the publishing rights to – her megahit, “I Will Always Love You.” “I cried my eyes out, because I could just hear Elvis singing it,” she confessed. “But sometimes you just have to stand your ground.”

Dolly has the untutored gift to honor her backwoods traditional roots and simultaneously stretch her unique wings of independence. You can’t help but grin when she writes about hanging out at Studio 54 – the flamboyant 1970s New York City disco night club: “Everybody was dancing. I didn’t…. I’d just sit on the couch and talk to Andy Warhol.” What a sight that must have been.

Behind the razzle-dazzle showbiz appearance and savvy business mind beats an unapologetic heart of faith. Although she capitalizes on her popularity, she offers a strong note of caution regarding our culture’s off-kilter obsession with celebrity.

“Every day, I ask God to help me lift people up and to glorify Him. That’s my mission, to lift mankind up if I can and to make people happy,” she writes in Songteller. “If there’s any light shining on me, I’d rather direct it at Him. I get a little scared sometimes when people act like I’m someone they’re worshipping…. I don’t believe in idol worship of any kind. People often do that to show business people and that’s scary to me. That’s when I say, ‘No look higher. Look up there. It ain’t me. Let me radiate His light, so that people see Him, not me.’”

Dolly grew up attending services at her Grandpa Jake’s House of Prayer. “He preached about Hell so hot that you could feel the heat,” she recalls. While it may have been all fire from the pulpit, Grandpa Jake provided young Dolly an indispensable platform to play the songs she was writing. “I feel like I’m closest to God when I write. I have to leave myself open for the songs to come in or go out,” she writes. “But God doesn’t hand you everything. You have to do the work.”

During songwriting retreats, she prays and fasts – for many days. “If you fast, it cleanses your body as well as your mind, so you can leave yourself more open to God,” she writes. “Fasting is awful. You’ve gotta pray hard, and you gotta have a lot of faith.” Despite the struggle, after several days, she senses a more fluid writing release in what she terms “God space” when lyrics begin to flow.

She humorously writes about a time when her musical family was playing at a different church in the mountains when they discovered the congregation practiced snake handling. “When those snakes came out, my daddy came running down the aisle, cussing the preacher in the middle of that church…. He was scared to death of snakes, and he didn’t believe in that kind of worship.”

One of the songs highlighted in the book is from her 1973 album, “My Tennessee Mountain Home.” It is a touching tribute to a Methodist minister and physician named Dr. Robert F. Thomas (1891-1980). Notoriously suspicious of outsiders, the folks living in the hills and hollers of the Smoky Mountains did not always greet Dr. Thomas with open arms. “A lot of them would hold a gun on him,” writes Parton. “If my wife dies or my daughter dies, you’re going to die, too,” they would say. Thankfully, it never went beyond empty threats doled out in fear.

“I was born on January 19, and it was snowing,” writes Dolly. “When I was trying to be born, Mom was having trouble so Daddy had to ride his horse out to Pittman to get Dr. Thomas to ride with him back to our place.” With no money, the Parton family paid the doctor with a sack of cornmeal.

Dolly never forgot the open-hearted ministry of Dr. Thomas. In her song, she called him a “mighty, mighty man [who] enriched the lives of everyone that ever knew him … a man the Lord must have appointed to live among us mountain folks in eastern Tennessee.”

In addition to his medical ministry, Dr. Thomas also pastored a congregation. “I still remember that antiseptic smell in his little clinic by the church,” she writes in Songteller. “He was there to save those poor people of the mountains, and he was kind of a savior to us.” If you visit Dollywood, she honors his legacy with a beautiful chapel on the premises named after Dr. Thomas. It hosts services every Sunday that the park is open.

When Dolly was young, a relative prophesized over her that she was going to do something special. She laid her hands on Dolly and said, “This child is anointed.” Not understanding, Dolly asked, “Mama, what does ‘anointed’ mean?” Her mom replied, “That probably means that you’re going to do great things for the Lord and do good things in life.”

There is indeed something very special about Dolly. Many years ago, I met her at a press conference for Joyful Noise, a film she did with Queen Latifah. “Are we kin?” she asked me. “I beg your pardon?” I replied. “Are we related? Where are you from?” she pressed.

Here I was standing face to face with one of my all-time favorite performers and I was tongue-tied and muttered, “Well, I’ve lived in Kentucky for 20 years, but I was raised in Southern California and my family is from Pennsylvania and Iowa.”

Undeterred, after the press conference, she came right back at me with that trademark sassy determination: “I still think we might be kin!”

Her radiant smile and effervescent spirit had me almost wondering if she might be right. She is a national treasure and a trainload of joy.