With Hearts for Mission 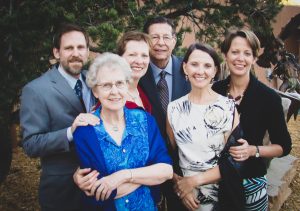 Honoring the legacy of H.T. and Alice Maclin. Alice Maclin passed away on June 23 (six years after H.T.). As shown in this photo, the Maclins were so very proud of their four children, Greg, Cathie, Susan, and Ruthie.

H.T. and Alice Maclin may be names familiar to you. In January 1984, H.T. became the founding president of The Mission Society for United Methodists (now TMS Global). Its launch was well known among evangelical United Methodists and was so momentous in Church news that it was reported in outlets such as Christianity Today and Time magazine.

It is a gutsy move to leave one’s 30-year career to head a start-up. But except for a home mortgage and a set of encyclopedias for their children, the Maclins had lived debt-free. They shaped their lives in such a way to be available to follow God’s leading in decisions – like this one.

Those of us around during early days of The Mission Society for United Methodists remember how H.T. would recount the forming of this ministry. He would almost always begin by telling of 1944.

That year, H.T. was in the Pacific aboard the aircraft carrier USS Anzio. A typhoon hit that would take the lives of 800 men. In the midst of the panic on board, H.T. was captivated by the calm of a shipmate. When he later asked about it, this naval cook explained that his peace came from the Lord and that H.T. could have that peace. The sailor prayed with H.T., and H.T. surrendered his life to Jesus.

Two months later, H.T. witnessed a Japanese attack and the sinking of the USS Bismarck Sea. So many of his former shipmates were on that ship, to which he had barely missed being assigned.

“Why was I spared?” he wrote. “Whatever it may be … the result of it overwhelmed me as I had never been so before. I firmly believed I was saved for a reason yet to be revealed to me by the Lord.”

In 1947, after the war, H.T. married Alice. The next year, at the Urbana Mission Conference, this young couple (at ages 22 and 19) dedicated their lives to world missions. That would change everything for them.

After the Maclin’s time at seminary – and both graduating with their master’s degrees – H.T. and Alice were appointed by the United Methodist mission board to what is now the Democratic Republic of Congo and later to Kenya.

For the next 20 years, the Maclins would serve with their children in Africa.

So revered was this couple that in 1964, President Tubman of Liberia honored H.T. by naming him Knight Grand Commander of the Humane Order of African Redemption.

After returning to the States, Alice taught at what is now Perimeter College in Decatur, Georgia, and developed an ESL program there. She also spent some time in China, developing English curriculum for the first independent secondary school and college allowed to reopen since the Cultural Revolution.

H.T. served for nine years as an executive with The United Methodist Church’s General Board of Global Ministries (GBGM). Over the years, H.T. and others had noticed a change in the Board’s theology of missions and a decrease in the number of United Methodist missionaries being sent out.

When the founders of The Mission Society were looking for someone to lead it, H.T. volunteered. And in 1983 H.T. left his post with GBGM to take the helm of this new mission agency.

Funded entirely by donations, The Mission Society for United Methodists would provide additional mission opportunities for those of the Wesleyan tradition called to serve in cross-cultural missions.

Now 36 years old, and with a new name, “TMS Global” has mobilized, trained, and sent more than 138 missionaries. Today its cross-cultural witnesses (missionaries) serve in 36 countries.

Nearly any time H.T. told The Mission Society’s story, he would conclude by reciting from Acts 26 (the text used in the service in which he and Alice dedicated their lives to world missions): “But get up and stand on your feet. I have appeared to you to appoint you my servant. You are to tell others what you have seen of me today and what I will show you in the future.” (TEV)

This call – so faithfully answered by the Maclins – remains the burden and great privilege of the TMS Global community.