The Theology Behind Ordination 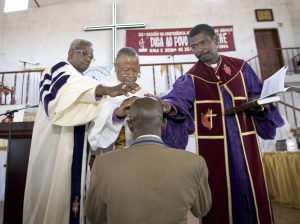 The Wesleyan Covenant Association has released a series of articles on new paragraphs for inclusion in its draft “Book of Doctrines and Discipline.” In the first article on these sections, the Rev. Dr. David F. Watson addresses the theological foundations for ordination in a new expression of Methodism. On the following pages, the Rev. Dr. Suzanne Nicholson writes on the WCA’s proposals for deacons, and Pastor Matt Abel rounds out the series by exploring the WCA’s recommendations for the service of licensed local pastors.

A new, traditional expression of Methodism is forming. We have before us tremendous opportunities and challenges, and we face both in our conversations regarding ordination. One of my concerns about ordination in The United Methodist Church has been that we have too often allowed pragmatism, rather than clear theological principles, to shape our language and practices around ordination. We have had serious disputes over ordination without a clear sense of what ordination is.

As the Wesleyan Covenant Association has approached questions around ordination for a new expression of Methodism, it has tried to ground its work in the principles of theological integrity, biblical fidelity, simplicity, and clarity. In what follows I will provide a brief overview of the WCA’s proposals regarding ordination and their theological underpinnings.

All Christians are called by God to ministry in one form or another. First Peter speaks to the church about its core identity: “You are a chosen people, a royal priesthood, a holy nation, God’s special possession, that you may declare the praises of him who called you out of darkness into his wonderful light” (1 Peter  2:9  NRSV). Protestants have long affirmed the “priesthood of all believers.” Each of us can “approach God’s throne of grace with confidence, so that we may receive mercy and find grace to help us in our time of need” (Hebrews 4:16). Put differently, all Christians are comprised within the ministry of the laity. The term “laity” comes from the Greek word laos, which means “people.” The laity are the people of God who have been called out from the world into the church through the sacrament of baptism. Through the laity most of the church’s ministerial work takes place.

From among the laity, some people are called to particular sacred vocations. Those who say yes to this calling, and whom the church affirms in their calling, become the clergy. The term “clergy” is derived from the Greek word kleros, which means “portion,” among other things. A certain portion of the laity are chosen for special service, some as deacons, some as elders. By the laying on of hands, we demonstrate the church’s recognition of them as so called, designate them as having been set apart for such service, and pray God’s empowerment of their ministry. It’s important to clarify here that clergy remain laity. Not all laity are clergy, but all clergy are laity. They are people of God called to an order of ministry within the community of baptized Christians.

The primary call of all clergy is to service in the Church. We call these “deacons.” The Greek word diakanos, from which we derive “deacon,” simply means “servant.” The Bible teaches us about deacons in a number of places. One might say that the first deacons were the seven who are chosen to serve in Acts 6. The seven are called specifically to serve (diakonein) at tables, or, in other words, to help with the distribution of food. The apostles lay hands on them and pray for them in order to set them apart for this service. First Timothy 3:8-13 describes the qualifications for deacons. Deacons are mentioned alongside bishops in Philippians 1:1, and Paul mentions a deacon named Phoebe in Romans 16:1. 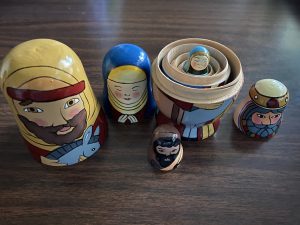 Like nested dolls, elders do not cease to be deacons. Rather, they are always both laity and deacons, but they also have additional responsibilities and duties. Photo: Good News Media.

The ministries of deacons can take many different forms. Some are called to teach. Others are called into specific ministries with the poor. Some are called to administration. As a church, we should recognize these callings, affirm them, and pray God’s empowerment of them. When the bishop lays hands on a deacon, it is the church’s “yes” to God’s calling of a Christian into the ministry of service, and the church’s prayer that God will empower and bless the one called. He or she is thus received into an order, or, as we say, ordained. An ordained Christian may spend his or her entire vocation serving as a deacon.

Some deacons, however, may be called into a ministry of overseeing word, sacrament, and order for the Church. In these circumstances, we say that they are called into an additional order, the order of elders (Greek: presbyteroi). They do not stop being deacons when they are ordained as elders, but they take on additional specific responsibilities. Titus 1:5-9 describes qualifications for elders and bishops (who are drawn from among the elders). In Acts 20:17-34, Paul gathers the elders in Ephesus for a farewell speech, admonishing them to act as faithful shepherds over those entrusted to them, and in particular to guard against “wolves” in their midst who will distort the truth. First Timothy 5:17 refers to elders as those who preside over the affairs of the church. First Peter 5:1-4 offers this excellent advice: “I exhort the elders among you to tend the flock of God that is in your charge, exercising the oversight, not under compulsion but willingly, as God would have you do it – not for sordid gain but eagerly. Do not lord it over those in your charge, but be examples to the flock. And when the chief shepherd appears, you will win the crown of glory that never fades away.”

In these proposals for ordination in a new Methodist movement, oversight of the sacraments is reserved for elders. Deacons may have sacramental authority in some circumstances, but only with the approval of a bishop and under the oversight of a presiding elder. Why is this the case? The reason is not that elders are somehow better than laity or deacons. It is that they are called to preside in the life of the church, and there is no more significant event at which to preside than in the administration of the sacraments. As Methodists, we believe that baptism is not just an initiation ritual, but a channel of the Holy Spirit’s power. We believe that Holy Communion is not just a remembrance, but a means by which we truly receive the body of and blood of Christ by faith. Baptism and communion are both ordinances – practices commanded by Christ – and sacraments –  reliable means by which we receive the transforming grace of God. Those charged with presiding over these means of grace are (hopefully) educated in a way that allows them to understand the sacraments theologically and administer them properly. They are examined by the church for both calling to and fitness for sacramental oversight, and subsequently ordained by the church to preside. It is no light matter to oversee sacramental practice, which is why we locate authority for such within a group of clergy called and prepared to do so.

In summary, the orders of the church should relate to one another like nested dolls (to use a metaphor from my friend Scott Kisker). Every Christian stands within the order of laity. Every deacon remains within the laity, even as he or she takes on special responsibilities in the life of the church in obedience to the call of God. Likewise, elders are called to even more specific ecclesiastical responsibilities, but they remain both deacons and laity. Ministry is not simply for a select few. It is for everyone. Clarity about our orders, responsibilities, and duties will help us to live faithfully in this new expression of Methodism.

David F. Watson is Academic Dean and Vice President for Academic Affairs and Professor of New Testament at United Theological Seminary in Dayton, Ohio. He is also a member of the Wesleyan Covenant Association Council. Dr. Watson is one of the hosts of “Plain Truth: A Holy-Spirited Podcast” and the lead editor for Firebrand (firebrandmag.com).