The Stumble of Grace 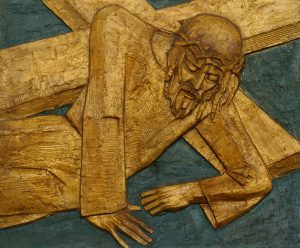 Ninth Station of the Cross. Photo by Zvonimir Atletic.

Like so many people, I’ve given chunks of time every day for months to pray against the virus, and against racism, and against all the crazy things that have cropped up as our collective nerves have gotten frayed. One of the best things I discovered during this season of prayer is the stations of the cross. I’d never had much use for them before. I think I just didn’t get them, but they’ve come alive for me in this season. I found out that you can pray the stations of the cross over just about anything and get clarity.

The stations of the cross are probably more familiar if you grew up Catholic or Orthodox. There are fourteen visual stations. The first one begins with Jesus being condemned to die and the last one is Jesus being laid in the tomb. The collection of them help us meditate from condemnation to death on the sacrifice of Jesus.

This is what I didn’t know about the stations of the cross before I first prayed them early on during our shut-down. I didn’t realize I could pray them over specific issues — that by meditating on the suffering of Jesus from condemnation to death as I prayed about the virus or about the sin of racism, I could see in a different light how Jesus suffered and died for those very things in order to overcome death and sin. I discovered the stations were a profound and rich way to bring the suffering of Jesus into our suffering. When we pray the stations contemplatively, we experience the truth that Jesus gets us. He loves us. He is in it with us.

The first time I prayed the stations with the virus in mind, I discovered a treasure embedded in this powerful, devotional visualization of Jesus’ journey toward his own crucifixion. At the third station, Jesus falls. He’d been condemned and handed a huge, heavy cross to carry, the same one he’d be nailed to. He was told to carry it to the place of his death, but eventually it became too much to carry. Too heavy. Jesus had already been beaten half to death and under that weight and in that weakened state, the Bible story tells us someone had to help him. It doesn’t specifically say he fell but it must have been obvious he needed help.

It is at the third station we think about Jesus falling for the first time under the weight of his cross.

But he gets up again and carries his cross a ways further down the road. Then at the seventh station we’re told to consider that Jesus might have fallen a second time. The fall itself isn’t in the scripture but the point of the station is to feel it, to feel the weight of this cross and all it holds and represents. This weight is more than just wood. It is us. It is everything we’ve done to make that cross a necessary burden to bear.

At the second fall, that weight seems unbearable. But Jesus keeps going. Somehow, he finds strength and purpose to get up again, to pick up this cross and keep carrying it with all that it holds. And now, if we are contemplating well, we are with him in this weight. We feel the pain. We taste the sweat and blood. We hear the people weeping and also the ones who are jeering, most of whom have no clue why.

Let’s be clear on this point. There is no Rocky Balboa moment among these stations of the cross, where Jesus catches his second wind. The scripture never says he one-hands the cross and trots up that hill. No. In fact, in the traditional stations of the cross there is a third stumble at the ninth station. It represents the struggle of this cross. It asks us to feel the full weight of the sin that piles on as we keep demanding our own way, the chronic impatience that is the default setting of humanity, the inability to see life from any other vantage point than our own.

That ninth station? It was the one that broke me the first time I prayed these stations with a group as we prayed against the virus. I know the Word well enough to know the backstory but still, I could feel the spirit behind this station. I became overwhelmed by the thought of stumbling people all around us — people who came into this crisis, into this year, already bearing the unbearable burdens of broken marriages and bad finances and addictions and illness. I could sense the pain of people who were already carrying more than they could bear, who had already stumbled more than once before they ever arrived at this pandemic.

That third stumble is also where we feel the cost of our own defects, of the things we so stubbornly hang onto because we can’t take one more change, or because we just don’t want to change. That is the weight he bore. And it wasn’t a game. It wasn’t easy. Yes, Jesus was all God, but he was also all human. He clearly felt the humanity of that walk up a hill with a cross on his back. Talk about courageous love! There is no power greater than the love of Jesus that compelled him to stand up from that stumble — not his, but yours — and to keep walking, to stay in it for the sake of all our stumbles. That ninth station asks us to see our part in this journey.

The tenth station of the cross represents the height of vulnerability as we contemplate them stripping Jesus of his garments so he would be left totally exposed. Do you think Jesus doesn’t feel your fear? Your horror at the thought of everyone finding out you’re a fraud? You think he doesn’t get what it feels like to be left hanging, literally hanging with no idea how all this is going to end, or when? My friend, Jesus gets you. He so gets you. That tenth station — Jesus brutalized, stripped, hanging — is the very image of truth and courage. Sheer strength.

Brene Brown’s definition of vulnerability is “having the courage to show up when you can’t control the outcome.” She says, “Vulnerability sounds like truth and feels like courage. Truth and courage aren’t always comfortable, but they’re never weakness.” When the Bible tells us that love always rejoices in the truth, we ought always to finish the sentence with, “… and truth takes courage.” Because it takes courage to stand, and then stand up again even when we stumble. It takes courage to be vulnerable and to admit when we are wrong and to stand up again and keep going. It takes courage to stay in the hard conversations, and to stay in community, and to stay in the fight but when we do, it is always in the spirit of Jesus. We surrender and we keep surrendering because Jesus keeps getting up again, keeps carrying that grace of a cross that bears what we can’t.

And we keep surrendering our heart because today, we may be carrying something we thought we could somehow bear on our own. And today, we may be adding to the weight of Christ’s sacrifice. Try as we might, at some point today we are going to demand our own way or get angry or impatient. At some point today, we’re going to stumble and what stands us up again is humility enough to surrender our weakness to the power of God. As Andrew Murray says, “Humility is the nothingness that makes room for God to prove his power.”

In recovery circles they say that daily surrenders are not how we keep from stumbling, but how we keep getting up again. We surrender as much of ourselves to as much of God as we understand and we keep surrendering, keep showing up even when we don’t get to control the outcome, because we trust the power of the cross to finish the work well.

Maybe the most courageous thing of all that we can do today is to fully own our selves — the good, the hard, the defects, the questions, the inadequacies and feelings of inadequacy, all of it. Maybe the most courageous thing we can do today is allow our hearts to be softened again by the love of a Messiah who knows what it feels like to stumble and who never gave up.

He never gave up on you then, and isn’t giving up on you now.

Carolyn Moore is the founding pastor of Mosaic United Methodist Church in Augusta, Georgia. She has written numerous books, including Supernatural: Experiencing the Power of God’s Kingdom (Seedbed). Dr. Moore serves as the Vice-Chair of the Council of the Wesleyan Covenant Association.