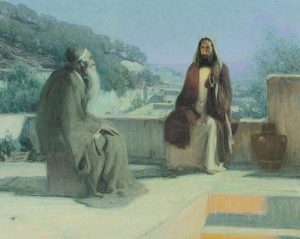 “I tell you the truth, no one can enter the kingdom of God unless he is born of water and the Spirit,” Jesus told Nicodemus. (John 3:5) Art: Henry Ossawa Tanner (1859-1937) Wikipedia Commons.

What does it mean to be saved? How is one saved? These questions are at the heart of the Gospel.

John Wesley famously wrote, “I am a spirit come from God and returning to God; just hovering over the great gulf, till a few moments hence I am no more seen — I drop into an unchangeable eternity! I want to know one thing, the way to heaven — how to land safe on that happy shore. God himself has condescended to teach the way: for this very end he came from heaven” (Preface to Sermons on Several Occasions).

According to a recent survey, many Americans are no longer concerned about finding the way to heaven. Only 54 percent of Americans believe they will experience heaven after they die. (Take a moment to absorb that stunning statistic.) The rest do not know what happens after they die, believe there is no life after death, expect to be reincarnated, or believe they will go to a place of purification prior to entering heaven. Just 2 percent believe they will go to hell. The survey is the American Worldview Inventory 2020, conducted by the Cultural Research Center at Arizona Christian University under the direction of Dr. George Barna.

Only 56 percent of Americans “consciously and consistently try to avoid sinning because [they] know [their] sins break God’s heart.” The percentage is higher among evangelicals (more than three-fourths). Still, the result seems to indicate that many people are not concerned that sinning will keep them out of heaven or that sin alienates them from a God who loves them.

Paradoxically, if sin does not keep one out of heaven, half of Americans (48 percent) believe that “a person who is generally good, or does enough good things for others, will earn a place in heaven.” Even 41 percent of evangelicals and a whopping 70 percent of Catholics subscribe to this position.

Only 33 percent of Americans “consider [themselves] to be a Christian; and when [they] die [they] will go to heaven only because [they] have confessed [their] sins and have accepted Jesus Christ as [their] savior.” Among evangelicals, there seems to be some confusion. While 72 percent believe they will go to heaven only by confessing sin and accepting Jesus Christ as savior, 41 percent believe they can earn a place in heaven through good deeds. At least 13 percent of evangelicals apparently believe both at the same time!

According to the survey, mainline Protestants, which would include United Methodists, hold beliefs very similar to the general American public, in most cases only a couple percentage points different. That sends the message that mainline Protestants have thoroughly assimilated into the American cultural understanding and do not stand out as distinctively Christian in their beliefs.

The Bible teaches that sin leads to destruction. “All who sin apart from the law will also perish apart from the law, and all who sin under the law will be judged by the law” (Romans 2:12). “The wages of sin is death” (Romans 6:23). There is no one who has not sinned. “For all have sinned and fall short of the glory of God” (Romans 3:23). So all have sinned and are under the judgment of God, leading to our destruction.

How do we get out from under God’s judgment and avoid destruction? Many Americans apparently believe that they can overcome God’s judgment by doing good. In earlier times, many believed they could make up for sin by doing what John Wesley called “works of piety.” They could engage in religious rituals to get right with God. This would include baptism, confirmation, attending church, and receiving Holy Communion. They believed that if they did these rituals, it would make up for the sins they committed during the week. Their lives were unchanged, but they participated in church activities to alleviate their guilt.

Today, most people do not rely on church rituals to get right with God. Instead, they do what John Wesley called “works of mercy” — helping others and doing good for other people. They believe that if they do enough good, they will counterbalance any bad they have done, and they will end up in heaven.

But the Bible teaches us that we cannot save ourselves from the judgment of sin, either by church rituals (piety) or good deeds (mercy). “For it is by grace you have been saved, through faith — and this not from yourselves, it is the gift of God — not by works, so that no one can boast” (Ephesians 2:9).

Instead, “this righteousness from God comes through faith in Jesus Christ to all who believe … and are justified freely by his grace through the redemption that came by Christ Jesus. God presented him as a sacrifice of atonement through faith in his blood” (Romans 3:22-25). “For God so loved the world that he gave his one and only Son, that whoever believes in him shall not perish but have eternal life” (John 3:16).

There are two ways of salvation being presented here. The biblical way of salvation is through faith in Jesus Christ, obtaining forgiveness of our sins and the gift of eternal life. The way believed by half of Americans, including 52 percent of all Christians, is through works — doing enough good so that God will grant us entry into heaven based on what we have earned. The biblical way of salvation is the Gospel, the good news that has been proclaimed by apostles, prophets, and teachers since the time of Jesus. To adopt the way of salvation through works is to abandon the Gospel and the teachings of the Christian faith, whether one calls oneself a Christian or not.

The non-biblical way breaks down around two important points. One, it is impossible for either religious rituals or our good works to expunge the stain of sin from our lives. “It is impossible for the blood of bulls and goats [religious rituals] to take away sins” (Hebrews 10:4). They are instead a “reminder of sins” (vs. 3). It is only through the perfect sacrifice of Jesus Christ on the cross, and our receiving the benefits of that sacrifice through faith, that our sins can be forgiven and taken away. “This is my blood of the new covenant, which is poured out for many for the forgiveness of sins” (Matthew 26:28). “In [Christ] we have redemption through his blood, the forgiveness of sins” (Ephesians 1:7).

The second point that scuttles the non-biblical way is that we are incapable of living completely good lives. We cannot do enough good to overbalance the bad that we do. In fact, any violation of God’s commandments places us under judgment. “For whoever keeps the whole law and yet stumbles at just one point is guilty of breaking all of it. … If you do not commit adultery but do commit murder, you have become a lawbreaker” (James 2:10, 11). “We have already made the charge that Jews and Gentiles alike are all under sin. As it is written: ‘There is no one righteous, not even one; there is no one who understands, no one who seeks God. All have turned away … there is no one who does good, not even one.’ … Therefore no one will be declared righteous in [God’s] sight by observing the law; rather through the law we become conscious of sin” (Romans 3:9-12, 20).

If religious rituals or good deeds could gain us eternal life, there would have been no need for Jesus Christ to give his life on the cross in the most torturous and heinous death imaginable for our sins. That is in fact what some liberal theologians teach — that Jesus’ death was not an atoning sacrifice for our sins, but a political execution by a jealous religious establishment and an oppressive world empire. They would say that our task is to imitate Jesus in giving ourselves for the cause of liberation from political and religious oppression.

These approaches of works righteousness or a political reading of Jesus’ life miss the Gospel entirely. They may be a form of religion, but they are not the Christian faith.

The survey results drive home in dramatic fashion the challenge that lies before us in the church. We must teach our own people the Gospel, starting once again from the basics of sin and salvation. As many as half our members do not understand the Gospel or how to be saved from sin and eternal death.

Just as importantly, we must reach out to an unbelieving world, helping them understand their alienation from God and from their true purpose. We need to show them that the only way to overcome that alienation is through giving one’s life in faith to Jesus Christ. We cannot earn God’s approval or forgiveness. We can only cast ourselves upon his mercy and grace. Yes, a changed life of good works follows our self-surrender to Christ, but without the Holy Spirit’s presence in our lives, our attempts to live for God fall woefully short.

Too many pastors today preach to their people the message that they should “do good” in various ways, assuming they are all Christians. Unfortunately, the survey shows that a high percentage of church members or attendees is not truly Christian, but is striving to earn their way into God’s favor. While encouraging people to live good lives, we must emphasize the need for faith in Jesus Christ and reliance upon his presence and power. Otherwise, we will continue to see a society and a church that dilutes the Gospel and eventually loses it entirely.