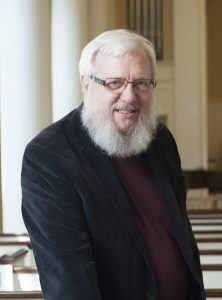 Dr. William J. Abraham is an irreplaceable Irish import to United Methodism. He is an ordained elder of the Rio Texas Conference and the Albert Cook Outler Professor of Wesley Studies at Perkins School of Theology in Dallas. He is the author of numerous books such as Divine Revelation and the Limits of Historical Criticism (Oxford), Crossing the Threshold of Divine Revelation (Eerdmans), Canon and Criterion in Christian Theology (Clarendon), The Logic of Evangelism (Eerdmans), and Wesley for Armchair Theologians (Westminster John Knox).

Several years ago, Abraham and Dr. David F. Watson teamed up to write Key United Methodist Beliefs (Abingdon). Watson, professor of New Testament and academic dean at United Theological Seminary, is a frequent contributor to Good News. We asked Dr. Watson to interview his colleague and mentor about a future transition into a new project. What follows is their exchange.

Dr. David F. Watson: You’ll soon retire from the Albert Cook Outler Chair in Wesley Studies at Perkins School of Theology, having taught at Perkins for 36 years. When you look back over your time at Perkins, what brings you the greatest sense of accomplishment? Do you wish you’d done anything differently?

Dr. William J. Abraham: Perkins has been a perfect setting for my work across the years. I have always seen myself as working in internal exile where I need the stimulus of radically different positions to drive me to think things all the way to the bottom. At Perkins I have had a front-seat in the articulation of two competing visions of theology: a neo-liberal position brilliantly worked out by Schubert Ogden and then a liberationist vision shared across much of the faculty. Albert Outler’s unrevised vision of Methodism was also in the picture; as was the work of more conservative scholars like Bruce Marshall, one of the sharpest Catholic minds in contemporary theology.

The resources for study and travel have been terrific. Bridwell library is magnificent. I am proud to have been honored with the top awards in both teaching and scholarship as well as the Lifetime Achievement Award in the university given two years ago.

So, I have been a happy warrior in the academy. It was a great decision to come and stay here for thirty-six years of labor as teacher and scholar. One of my greatest accomplishments has been the training of a cadre of scholars in the Graduate Program in Religious Studies who are now my teachers. I have no regrets.

It was recently announced that you’ve taken a position as Director of the Wesley House of Studies at Baylor University’s Truett Seminary. No doubt you’ve received many offers to work with and for other institutions over the years. What prompted you to accept Baylor’s offer, and what are your hopes for the House of Studies?

The decision to retire took six months to make and was formalized in December last year; it was far from easy. Several factors weighed with me. The clock is ticking, and I have several academic projects to finish. I want to spend more time in the former Soviet Union and in Romania where I have worked for the last ten years, helping establish a new church. I felt my time at Perkins was complete and it was time to move on.

Above all I wanted to reorient my work and ministry and felt that it was time to do something different. The Baylor offer came totally out of the blue after I had already formally signed my contract to retire.

It rekindled my love for working on Wesley and Methodism; I have a new edition of the canonical sermons that reads them as a handbook of spiritual direction in the works. More importantly, we need to find new spaces to pursue work in the Wesleyan tradition; Baylor as a top-flight university is a perfect setting. My dream is that the Wesley House at Truett becomes a first-rate, global center for Wesley Studies and for training for ministry.

How do you respond to people who might say that Methodist students should not be educated at a Baptist institution?

Baylor is a delight because it takes the Christian faith, broadly conceived, seriously as a university. This will be change from the more secular orientation that I currently occupy. Truett is a young school and full of energy with top-notch leadership in place. The Baptist heritage will provide friendly competition to provoke us to love and good works, including good intellectual work for the sake of the Wesleyan tradition. Sociologically, United Methodists tend to look up to the bigger battalions in church history while looking down on those beneath it; so, I know the game that is being played. Time will tell, but I bet in years to come the fruits in ministry will speak for themselves. 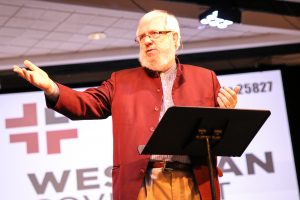 Dr. Abraham speaks at a gathering of the Wesleyan Covenent Association. Photo by Steve Beard.

It’s almost certain that a new, traditional Methodist denomination will form next year after the 2021 General Conference. What are your thoughts about how theological education should look for this new denomination? What should we do differently than we have in the past?

We face a cataclysmic future in theological education in United Methodism. Let’s be frank, even our best schools have not been hospitable to conservative students and faculty for years. This is going to get worse, so the challenge for the new church is enormous. We certainly have enough schools to be a platform on which to build. However, we will need to be creative as we move forward.

We need to have as much person-to-person teaching as possible; the crisis with Covid-19 makes this clear. If we could get a degree-granting institution to cooperate, we could look at the German Model where students can take intensive courses with the best of the best in various sites across the nation. Think of an itinerating tabernacle of scholars and students brought together to study and learn. In the worst-case scenario, we can always fall back on the online option; but we have to recognize the limitations of this option. We will find a way forward, but it will take time.

Over the years we’ve had many conversations about international theological education. In the United Methodist Church we’ve sometimes done well in this regard, and sometimes we haven’t. What challenges and opportunities do you see in the days ahead for the new denomination as it attempts to implement international programs for theological education?

This is way above my paygrade! My preference, as happens in my current work in Russia, is to do on-site teaching. Cliff College in England is the epicenter of innovation in this area and their work is very impressive. So, we will find a way forward. We need input from global Methodism; this requires supporting schools outside the United States so that they will have their own voice and integrity.

At present you’re finishing up a four-volume work on divine action. What do you mean by “divine action,” and why is it so important that you would devote four volumes to it?

Divine action is simply short hand for particular claims about what God has done, say, in history, or is doing now, say, in our lives and in particular providence. Once we look under the surface there are a host of issues to pursue. I have been working on them for fifty years and am now completing volume four. The first volume unpacks and resolves objections to divine action; the second is an immersion in the premodern tradition which identified various worries about specific divine actions; the third is devoted to systematic theology; and the fourth lays out an on-going agenda for the future.

I first got interested in the topic because of my dissatisfaction with Calvinism; I was smitten with issues related to human action in my undergraduate work in analytic philosophy and experimental psychology; and over time I was convinced that I could solve certain long-standing debates, such as the relation between grace and freedom.

That said, I have deliberately pursued serious detours into other terrain, notably, evangelism, the epistemology of theology, and Wesley Studies. I am currently pursuing long-standing interests in the relation between theology and politics. All these have provided invaluable insights on issues related to divine action. At heart I remain an Irish Methodist doing what I can for the fresh articulation of our heritage.

Your influence on at least two generations of orthodox, Wesleyan scholars has been considerable. For many of us, you’ve been a model, even a spiritual father. What advice do you have for those who have come after you in this work of preserving the faith once and for all entrusted to the saints?

I appreciate the kind words! On advice, let me try telegrams. Be anchored in a discipline that requires rigorous standards of excellence; for me that has been analytic philosophy. Stand by the truth and work on it until it becomes essential to your identity. Never, ever be up for sale, as far as the revelation of God mediated in Scripture is concerned. Stay grounded in regular ministry in the church. Take the politics of institutions seriously; be street-smart. Know your critics better than they know themselves. Always keep political commitments penultimate. Fast and pray as best you can!