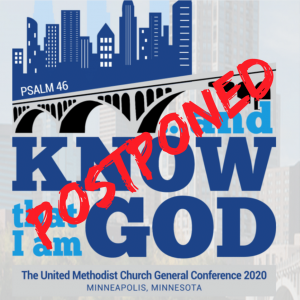 By now, I am sure you are aware that General Conference has been postponed until sometime in 2021. A date and place for the rescheduled conference has not been announced and may not be for a few weeks.

Beyond question, this was the right decision. With the spreading coronavirus making travel all but impossible, holding General Conference would also be impossible. We need to prioritize the lives and health of all concerned. Right now, our focus needs to be on ministry in our various communities, not addressing internal denominational issues.

Our hearts and prayers are with all those who are suffering from Covid-19 and with the people on the front lines of this destructive pandemic. As followers of Christ, we are being called to pray fervently, imagine new ways to remain connected with our local churches under the shadow of “social distancing,” and minister with compassion to those in need.

As United Methodists who are concerned about a faithful future for a Wesleyan witness, we must also think through the implications of postponing General Conference.

Probably the greatest reaction to postponing General Conference other than concern for those suffering or threatened by the pandemic is a sense of disappointment. Many were looking forward to resolving the denominational conflict that has somewhat paralyzed the denomination, in order to move forward in a positive direction.

Traditionalists are eager to move into a more spiritually unified, theologically traditional denomination that can reconfigure itself to be more nimble and effective in ministry. Progressives are eager to rid the denomination of what they perceive to be unwarranted discrimination against LGBTQ persons. Both groups were primed and ready to support the Protocol for Amicable Separation. Many others are ready to be done with the conflict, regardless of their personal views. All will have to wait an additional year or more to move toward their preferred future.

The postponement of General Conference does not change the fact that our church is still in an irresolvable conflict. When the pandemic is over, the conflict will remain. In that sense, the momentum toward amicable separation will continue. The only way to end the conflict will still be to allow different groups in the church to go their separate ways.

In light of that fact, it would be inadvisable for local churches and clergy to prematurely separate from the denomination. There may be situations where local churches or clergy in a hostile and intolerant annual conference need to separate now for their own spiritual health and the wellbeing of their ministry. But for most, it will be possible to continue in the current circumstances for another year. I know for some clergy, the pandemic, postponement, and stock market volatility may necessitate a postponement of their plans to retire from active ministry. Where possible, it would be helpful for long-tenured clergy to continue serving their congregations to help them through this time of waiting and transition into a new reality in 18 months.

The delay in General Conference can actually be helpful in some ways. Both a new traditional denomination and a new “liberation”/progressive denomination can use this extra time to continue developing their structure. The fast approach of General Conference this May was forcing both groups to move more quickly than they were perhaps comfortable moving in trying to develop the skeleton of a new denominational structure.

Having the options for whatever new denominations will form more fully fleshed out will benefit all United Methodists as we move toward decisions on alignment after General Conference.

Dealing with the Nuts and Bolts

Apart from resolving our denominational conflict, General Conference is necessary for other reasons. The most pressing demands include passing a budget for the 2021-24 quadrennium and electing certain positions (including Judicial Council, University Senate, and Commission on the General Conference, among others). If General Conference does not meet, these necessary functions cannot be cared for.

In a recent commentary, the Rev. William B. Lawrence proposes that a skeleton General Conference meet sometime before the end of the year, perhaps with regional gatherings linked together by video conference. This skeleton General Conference could enact a budget and elect the persons necessary to meet the requirements of the Discipline, but pledge not to take any other actions.

With regard to the election of persons to particular positions, the problem might not be as severe as Lawrence imagines. While the Discipline mandates that a certain number of persons be elected to Judicial Council (for example) in certain years, and also mandates the length of term at eight years, it also says that the term expires at the adjournment of General Conference (¶ 2605). Since there is no General Conference in 2020, the terms of current Judicial Council members would not expire.

The requirements for electing members of the University Senate are even less stringent. Members are to be elected by the General Conference for the term of a quadrennium. The usual practice is that members of an elected body serve until their successor is elected. Since General Conference will not meet to elect a successor, the terms of individuals serving on the University Senate would continue. The same provisions apply to election of persons to other agencies and positions.

The most pressing technical requirement of General Conference is to pass a budget for the new quadrennium. The budget also includes a “base rate” or percentage of local church receipts that is the basis for apportionments. If there is no General Conference meeting, the church would technically be operating without a budget and with uncertainty as to the amount of apportionments.

It can be argued that, in the absence of a General Conference, the apportionment amounts would continue the same as in the current quadrennium. The General Council on Finance and Administration and the Connectional Table are empowered to make allocation of apportionments received. So even though there might not be a new budget beginning on January 1, 2021, apportionments could be collected on the same basis as before, with GCFA and the Connectional Table allocating the funds as they have in the past. This is not an insurmountable problem.

The bottom line in all of this is that the church can proceed to function in these extraordinary times without having a skeleton General Conference to meet in 2020. Leaders can plan and implement a meeting in 2021, allowing everyone to participate. It would be manifestly and embarrassingly unfair to have a full-fledged global denomination meet with only those able to attend a meeting in the United States. It would make a mockery of our connectionalism.

Our perseverance and patience are again being tested by the circumstances surrounding Covid-19 and the postponement of General Conference. By God’s grace, we will prayerfully meet that challenge, remaining faithful to Christ and the ministry he has called us to. As we pray for one another and minister to our world, may the light of Christ shine through us.