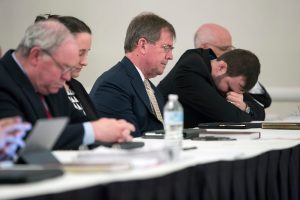 People who had submitted briefs to the United Methodist Judicial Council pray prior to a May 2018 oral hearing in Evanston, Ill. From left are the Rev. Keith Boyette, Stephanie Henry, Bishop Scott Jones, John Lomperis and Thomas E. Starnes. Boyette, Jones and Lomperis were among 28 United Methodists who signed a statement from a meeting in Atlanta about the formation of a new traditionalist denomination. File photo by Kathleen Barry, UM News.

A group of United Methodist leaders, including eight bishops, has issued a statement sharing its vision for a global traditionalist denomination focused on evangelism and the “primacy of Scripture.” Among the group’s essential doctrinal beliefs is defining Christian marriage as between a man and a woman.

Two of the bishops who signed the statement told UM News they would depart The United Methodist Church for such a new denomination. One other said he is considering it.

It calls for allowing traditionalist churches and conferences to leave with their properties to form another denomination, while also getting $25 million in United Methodist funds.

“Although no one yet knows what The United Methodist Church will look like following the 2020 General Conference, it is clear that our denomination is no longer unified in its beliefs,” the more than two dozen traditionalist leaders said in a press release accompanying their March 12 statement. “Therefore, some sort of separation is probable. As such, we felt it necessary to begin conversations about what the new traditional expression of Methodism might look like.”

Texas Conference Bishop Scott Jones joined the Rev. Keith Boyette, president of the Wesleyan Covenant Association, and Patricia Miller, executive director of the United Methodist Confessing Movement, in convening a recent meeting in Atlanta that led to the statement.

Read the rest of this story HERE