What Separation Means for Clergy 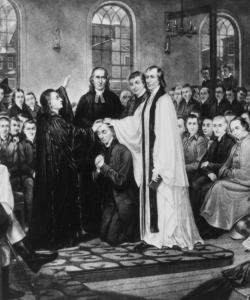 As the details of the “Protocol of Reconciliation and Grace through Separation” become better understood, questions arise about how the Protocol of Separation would affect groups within the church. I have already looked at how it affects U.S. churches and the central conferences. Another significant group impacted by the Protocol will be clergy, including bishops.

For many clergy, the idea of separation causes great anxiety. Separation could affect a clergy person’s job, career, and livelihood. Clergy and bishops wonder if there will be a place for them in the denominations that exist after separation. Clergy wonder what will happen to their pensions and health benefits. This article attempts to think through these questions with the current state of knowledge. Without a crystal ball, however, it is impossible to project with certainty what will happen in the aftermath of any type of separation.

Where clergy will end up is relatively straightforward. Clergy are members of the annual conference. Therefore, by default, clergy would align wherever their annual conference aligns, whether the conference takes a vote or simply remains part of the post-separation UM Church by not taking a vote.

If a clergy person wants to remain in the post-separation UM Church when their annual conference or local church separates to align with a new denomination, they would need to notify their District Superintendent prior to the date of separation. The post-separation UM Church would be responsible for securing an appointment for that clergy person under the guaranteed appointment process of the Discipline.

If a local church votes to align with a new denomination after the clergy notification deadlines above, the clergy serving that local church would have 60 days to notify the relevant authorities of their desire to move into the new denomination along with their congregation. Otherwise, they would continue in the post-separation UM Church with their annual conference and receive a different appointment.

In the same way, retired clergy would remain by default in their annual conference, unless they choose to align differently. No matter with which denomination a retired clergy person aligns, their church pension payments would remain unchanged, administered by Wespath.

Persons in the candidacy process in the UM Church may choose to align with a new Methodist denomination under the requirements set by that denomination. The legislation encourages new denominations to accept candidates at the point where they are in the process and not make them start over or redo work they have already done.

Of great concern to most active clergy is the question of where they will serve after the separation. The post-separation UM Church is likely to continue a guaranteed appointment, at least until any follow-up General Conference that might make changes to the church’s polity and structure. It is unlikely that a new traditional Methodist denomination would have a guaranteed appointment. However, it is likely that there would be a shortage of clergy in the new denomination because there are many more progressive and centrist clergy than there are traditionalist ones in most annual conferences. There may be more traditional congregations than clergy to serve them, which means that most traditional clergy would have a church to serve.

Likewise, retired bishops would remain by default part of the post-separation UM Church, unless they chose to align with a new Methodist denomination. No matter which choice they made, their pension payments would continue unchanged.

Since separation could affect clergy persons’ financial security, it is important to understand the impact of separation in this area.

The Protocol legislation requires local churches to continue paying their pastor, as long as that pastor is appointed to that congregation. The church would not abruptly stop paying the pastor if the pastor chose to align with a different denomination. All salary and benefits owed the pastor would be expected to continue until there were a change in appointment. Active bishops’ salaries and benefits would also be continued by whichever denomination the bishop aligned with. That is one reason why the legislation expects local churches that align with a new denomination to continue paying apportionments to the UM Church until January 1, 2021, or their date of separation, whichever is later, in order to cover these important obligations.

Retired clergy would continue to receive their pensions as before, administered by Wespath. Active clergy who align with a new Methodist denomination would have their pension shifted over to the program adopted by the new denomination, also administered by Wespath. They would lose nothing of their UM pension program prior to separation, but after separation their future pension contributions and benefits would be governed by the program of the new denomination. (Note that Wespath is proposing changes in the UM pension program that would change contributions and benefits going forward for those remaining in the post-separation UM Church.)

Clergy currently receiving disability payments would continue to receive them, no matter which denomination they aligned with. These benefits are administered by Wespath and are not tied to membership in the UM Church. Disability insurance and other benefits currently covered by Wespath would need to become part of the insurance program developed by any new denomination.

More detailed answers and explanations about how Wespath would handle the impact of separation on clergy may be found at this site.

There is no doubt that separation would be disruptive for many congregations and clergy. Every effort has been made in the Protocol legislation to minimize the disruption by not requiring votes and by providing for financial continuity for clergy. It is important for everyone to gain a clear understanding of the process that would be used in transitioning from the current reality into new denominations. The new denomination(s) will be working to set transitional policies in place in time for them to be shared broadly as annual conferences, local churches, and clergy are deciding on alignment.

As we move through the disruption, we need to be patient and gracious toward one another, treating each other as we would want to be treated, with respect and consideration. More importantly, we can move forward in faith, trusting God to supply all our needs, as he has promised. As we respond to the Lord’s leading in faithfulness, we can count on him to sustain and provide for us on this journey. We believe we are traveling through this wilderness in order to reach a better country, a place where we are able to operate freely as a church according to our convictions and faith.