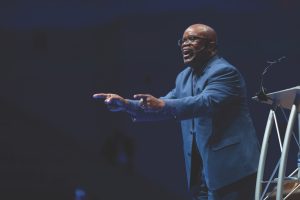 Let me now remind you, dear brothers and sisters, of the Good News I preached to you before. You welcomed it then, and still stand firm in it. It is this Good News that saves you, if you continue to believe the message I told you – unless, of course, you believed something that was never true in the first place. I passed on to you what was most important and what had also been passed on to me. Christ died for our sins, just as the Scriptures said. He was buried, and he was raised from the dead on the third day, just as the Scriptures said.” – I Corinthians 15:1-4, NLT

This is the word of God for the people of God.

The resurrection is still true. The church in Corinth had a cultural issue and a church issue. Because the walls of the church are permeable, whatever is in the culture cannot be kept out of the church. If we’re not careful, the teachings and the moorings of the culture become the norms for the church, and Paul has a church filled with everything going on in Corinth. Arrogant people. People who believe they have a gift that no one else has; that they have knowledge God hasn’t given anyone else.

Earlier, Paul wrote, “I hear there’s divisions among you” (I Corinthians 11:18). In other words, You are fussing and arguing over who is a better preacher. Paul? Apollos? Listen, Apollos never saved you. Doesn’t matter who the preacher is as long as Jesus is being preached.

Paul challenges the community with issues they raised to him – about lawsuits and marriage and idols and food they could eat. Sometimes we focus on the minor things and forget the major things God’s called us to do. While we’re legislating, God is calling people. Sometimes we fail miserably to listen to what God’s called us to do and to preach the good news, the Gospel. It’s the good news of Jesus Christ who came to redeem us from our sins. It’s the good news that says to a shaken world that Jesus still saves. The blood still cleanses and the Holy Spirit empowers and lost people can still be saved. We have a need to tell people that story over and over again.

I didn’t know God was telling me the story of redemption when I was eight years old. Raised by a single mom, I would pick up soda bottles and you could take them to the store next door and you would get a nickel for the bottle. I figured out pretty quickly, there’s bottles everywhere. I would take the wagon and look in the ditches and sometimes dig deep in the mud to find a bottle. Most of the time they were broken and unusable.

Sometimes I would find them and they were filled with dirt and mud – but they were precious to me. I lined them up in my wagon, but the store owner didn’t want unclean bottles. On the side of my house I had a hydrant and I would wash them and get them clean and put water in until the dirt was softer and agitate it and I would do that until they were pristine and I would take my two or three or four bottles and walk in the store. She would ask how many I brought in. We would get a nickel for each bottle. She gave me 15 cents or 25 cents – and cookies were still two for a penny. I said, My goodness, we’re going to have a time in here today.

Redemption occurred when I took something that seemed to have no value to someone that valued it. Later on in life I could see myself in those bottles. I could see myself on the side of the road filled with my sin and brokenness and corruption and meanness and evilness and someone saw something in me and began to tell me about a God who loved me and would clean me up and shake me up and pour me out.

We have to let people know that no matter what the world says about them, we have a God who redeems. When we present ourselves to God, God cleans from the inside out and offers us eternal life. When you know that, it doesn’t matter what the world is doing. We stand in the power of the resurrection because we know who God is and we know what God has done. Jesus died for you. Jesus Christ died for my sins. He didn’t die because I was nice and worthy and for me to live my best life now. That isn’t worthy of the Savior.

God loved us so much that he came down and died for me. That tells me I’m somebody. That tells me who I am. When you take that gospel message to people who are on the margins of this world and you tell them God loves them where they are but God has something so much better for them, it will turn their lives inside out, upside down, and they can begin to live in the power of God.

We are in a church where there’s a large number who have decided the Scripture is no longer Scripture, that it no longer means what it’s always meant from generation to generation. My brothers and sisters, we’re on the cusp of reclaiming the place where we lift Scripture high. We honor the word of God. When I don’t agree with Scripture, it doesn’t make Scripture wrong. It makes me wrong. Because I can’t put my mind around what Scripture says, doesn’t invalidate Scripture. It means I have growing up to do.

“He was buried,” Paul writes in our text. I think he wants to make sure we don’t think about this metaphorically and allegorically. Paul wants us to know he was buried, dead, dead. Not swooned or passed out or catatonic. He was dead, dead – dropped over the shoulder of Joseph of Arimethea and put in a tomb wrapped up and walked away from. He was dead. Rock put in front of the tomb. Nobody in. Nobody out. He was dead. Paul wants us to know the only way to overcome death is by the power of the resurrection.

If the resurrection is true – and I believe it to be true – then we have hope in this world. Not only was Jesus buried. He was raised on the third day. If it was Easter Sunday morning, this is what I would say to my congregation: They kept him in the grave all night Friday. Did you hear me? Not a sound, not a peep, all day Saturday. Weeping and mourning. But early on Sunday morning – before the rooster crowed and birds sung a hymn, before Peter, James, and John got up and wiped sleep from their eyes – Jesus already got up. On the third day he got up!

Here is a God who went into a tomb sealed on the outside – guards all around. Since he got up from the dead, since he’s up right now, it’s time for us to stand up, rise up and be the people God’s called us to be.

Here’s the better news. He didn’t just do it for himself. If he died and rose again, he’s the first fruit. If he died we can die – and live again. When you get rid of the fear of dying, what else do you have to be afraid of in this world? If I know I’ll live forever what will you do to me? How can you threaten me? You can hurt me physically and talk about me – but you cannot touch my soul. You can’t touch my heart. You can’t shake my faith.

I believe in the resurrection. My sisters and brothers, remember what Paul said to the church in Rome: “nothing can ever separate us from God’s love.” He wants you to know that “neither death nor life, neither angels nor demons, neither our fears for today nor our worries about tomorrow – not even the powers of hell can separate us from God’s love.”

The Rev. Kenneth Levingston is the senior pastor of Jones Memorial United Methodist Church in Houston. This article is an adaptation of the closing sermon he delivered at the recent Global Gathering of the Wesleyan Covenant Association in Tulsa, Oklahoma.