The Wesleyan Way to Read Scripture 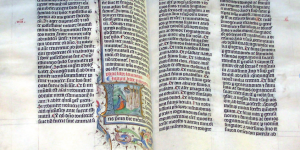 A Bible handwritten in Latin in 1407.

Last semester I taught a class called Wesleyan Biblical Interpretation. We read a considerable number of Wesley’s writings along with a couple of secondary texts. Rereading these primary and secondary sources led me to ponder anew the vast differences between the way in which Wesley read the Bible and the critical stances that emerged during and since the European Enlightenment.

Wesley did engage in some of what is called “lower criticism” – criticism of the biblical text in order to render the most accurate manuscript possible. He also at times offered translational corrections to the King James Version. Wesley would have balked, however, at the skepticism that came to characterize what is called “higher criticism,” or historical-critical readings of the Bible.

For Wesley, the way in which the church had interpreted a passage of Scripture through the centuries was in large part determinative of that passage’s meaning. In other words, the church’s consensus helped to establish the plain sense of the text. Reading the Bible was not simply an individual undertaking. It was an ecclesiastical undertaking. In fact, without the guidance of the church, it was not possible to understanding the Bible correctly. For Wesley the Bible had one purpose: to lead us into salvation, and therefore reading it apart from the church’s theology of salvation would be futile.

Historical Criticism. Even during Wesley’s lifetime, however, the seeds of historical criticism were beginning to sprout, and soon they would grow into a dense forest of interpretive skepticism. For the historical critic, the consensus of the church is far more likely to impede proper interpretation than to facilitate it. For one thing, the argument goes, the orthodox faith of the church depends upon an ancient worldview that is supposedly no longer believable to the modern mind. Modern people simply don’t believe in miraculous healing, the multiplication of food, angels, demons, and the like.

Further, according to the historical-critical method, the theological readings of Christians represent developments that are in many ways foreign to the text. The real meaning of the text is controlled by historical context. Only when we have clearly established the historical context of a biblical text can we begin to discern its meaning. The purpose of the Bible, for historical critics, is not to lead us into salvation, but to reveal the historically conditioned perspectives of ancient Israelite, Jewish, and Christian communities. To the extent that the Bible can inform the life of the church, it does so based upon the meaning derived from historical context.

The historical-critical approach long dominated seminary education. Of course, many scholars have adopted some of its presuppositions and interpretive strategies a la carte. I’d put myself in this camp. Historical context does matter in biblical interpretation. Yet I’ve rejected the skepticism that has tended to inhere within historical-critical approaches. I do not, moreover, limit the meaning of a text to its historical context. I believe there is real value in the ways in which Christians have interpreted texts theologically over the centuries.

Postmodern Approaches. To some extent, reliance on the historical-critical method has abated in seminary education. The modernist historical-critical approach has given way to postmodern readings that locate meaning in social location and identity. There are, for example, African-American, Korean, feminist, and queer readings of Scripture. Far from the originalist inquiries of the historical critics, these approaches emphasize the ways in which the text takes on a life of its own within particular communities today. A common (though not universal) feature of postmodern readings is a “hermeneutics of suspicion.” Rather than the skepticism of modernist interpreters, many postmodern interpreters approach the Bible as a source of coercive power that has been used to control, oppress, and harm.

Wesley’s reading has more in common with these postmodern approaches than with historical-critical method because he did not aspire to critical detachment from the text. Though Wesley did at times take into account the historical settings in which the biblical texts were written, he read them in specifically theological ways. His reading was conditioned by, among other perspectives, the worldview and values he derived from the Great Tradition of Christian faith, the Church of England, German Pietists, and the evangelical Methodist movement.

A Hermeneutics of Trust. Nevertheless, Wesley would have been as uncomfortable with some postmodern approaches as he would have the skepticism of the historical-critical method. His reading of the Bible was characterized by what we might call a “hermeneutics of trust.”

Wesley trusted the Bible. Or to be more precise, he trusted the God who had given us the Bible, and therefore he regarded the Bible as trustworthy. He realized that there were passages that one could not interpret literally. He believed that there were passages that, when taken at face value, presented the reader with an absurdity. He also understood that it was possible to use Scripture in ethically irresponsible ways (such as in support of the slave trade). He dealt with such matters as best he could (as we all do). The key to understanding Wesley’s hermeneutics of trust is to understand that his true north when reading Scripture was salvation. The Bible was the book that God had given us in order to teach us how to be saved – how to live in keeping with God’s will in this life and live with God eternally in the next. Any reading that did not lead to salvation was in fact a misreading.

Wesleyans and the Bible Today. It has been both spiritually edifying and intellectually interesting to look at Scripture through Wesley’s eyes. I’ve never been comfortable with a primary stance of either skepticism or suspicion. In part this is because, like Wesley, I believe that a good God has given us Scripture for our salvation. Scripture teaches us how to live well in this life and to live eternally with God.

Part of what is at stake for me in this conversation is vocation. There is a difference between a scholar and a scholar of the church. My work is in and for Christ and his church. It is in service to a saving faith in Christ that has been passed down from generation to generation through the church. To attempt to serve Christ’s church while separating her faith claims from her sacred text is an exercise in futility. It was that very faith that gave rise to the development of those texts. I haven’t jettisoned the tools I was given in my training as a biblical scholar, but neither have I retained all of the assumptions that so often accompany the use of those tools.

The people called Methodists would do well to attend more fully to the emphases of our founder as he approached the Bible. We could use more trust, more theology, more doctrine, and more prayer in our reading. Skepticism and suspicion aren’t going away, nor should we attempt to silence them. Yet neither should we give them a place of privilege as we read the church’s book.

David F. Watson is the academic dean and professor of New Testament at United Theological Seminary in Dayton, Ohio. This article first appeared on his blog and is reprinted here by permission. Dr. Watson is the author of Scripture and the Life of God (Seedbed)