Sour Milk and the Law 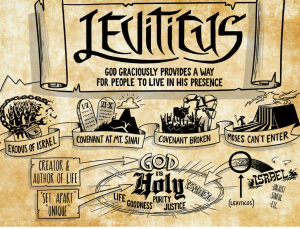 A segment of the Leviticus chart from The Bible Project video teaching series (TheBibleProject.com).

My wife, Karen, grew up in a family full of milk drinkers. Everyone’s glass of milk was filled and refilled each dinner hour. As a result, milk never had a chance to go bad in her house.

In my house, on the other hand, we were not such big milk drinkers. A gallon of milk was more likely to have a long life in our refrigerator. We were careful, therefore, about checking the expiration date.

One day, when Karen and I were young and just dating, she was at our house as I was preparing a bowl of cereal. After I poured the milk, I was suspicious that it had soured, and so I asked her to taste it for me to see if it seemed fine to her. Coming from the home she did, she was completely naive about what she was about to put in her mouth.

So it is that we human beings want to have nothing to do with something that is expired. Once a thing is expired, you see – milk, a credit card, or a parking meter – it is of no use or value to us. The question for us is whether the Old Testament Law is expired.

Did the Law Expire with Jesus? The common reasoning I have heard from church folks is that the Law has nothing to do with us because it is “Old Testament” and we are “New Testament.” The idea is that the Old Testament Law has been rendered irrelevant because of Christ.

The great irony of that position is that it runs so contrary to what Christ himself said. It was Jesus – not Moses in the Old Testament or some Pharisee in the New – who said, “Until heaven and earth pass away, not the smallest letter or stroke shall pass away from the Law, until all is accomplished” (Matthew 5:18 NASB). It was Jesus who said, “Anyone who breaks one of the least of these commandments and teaches others to do the same will be called least in the kingdom of heaven, but whoever practices and teaches these commands will be called great in the kingdom of heaven” (Matthew 5:19).

As we continue to read, we discover more fully Jesus’ attitude toward the Law. He cites, for example, the commandment not to kill. Most of us don’t come any nearer to breaking that commandment than we do becoming Knights of the Round Table. But Jesus presses the matter. He talks about being angry with another person, putting that common experience in the same conversation with killing.

Likewise, Jesus cites the commandment not to commit adultery. That is a sin some avoid out of genuine love and faithfulness, others out of purity and godliness, and others simply out of fear. But Jesus raises the stakes. “I say to you that everyone who looks at a woman with lust has already committed adultery with her in his heart” (Matthew 5:28 NRSV). Suddenly the number of adulterers increases exponentially.

Rather than dismissing the Law or defusing it, Jesus intensifies and personalizes it. For as long as it is a set of behavioral boundaries I must not cross, I can probably stay out of foul territory. But Jesus teaches that it isn’t only my behavior, it’s my heart.

As I reflect on his teachings, I cannot conclude that the Law expired with Jesus. On the contrary, I am led to believe that the Law was the 101-level course, and now he is pushing me further and deeper. The things we learned in that elementary material are not discarded by Jesus but built upon by him.

That summary statement has tempted folks to think the Law was nullified by Jesus’ simplification of it. “You don’t have to bother with those chapters of details,” we conclude, “so long as you love God and neighbor.” Thus the bulk of the Law is waved off.

The Golden Rule elicits a similar reaction. “So in everything, do to others what you would have them do to you,” Jesus said, “for this sums up the Law and the Prophets” (Matthew 7:12). Because one rule sums up the rest, we are tempted to think it replaces the rest.

Imagine a basketball coach saying to the players, “Score more points than the other guys.” Such an instruction sums up all of the coaching, the designed plays, the offensive and defensive strategies, and such. But to sum them up is not to disregard them. On the contrary, as soon as I understand that the purpose is to score more points, I should ask, “How best can we do that?” Then the coach will remind me of all of the things we covered in practice.

Jesus keeps before our eyes the real purpose of the Law. Lest we get lost in a roundabout of fussy religiosity, he keeps us pointed in the right direction. It’s about loving God and neighbor. But once I am reminded of the real point, I will earnestly ask, “What does that look like to love God? How do I go about loving my neighbor?” Then I may turn to the Law for instruction. The teachings of Jesus do not dismiss the Law, but invite us back into it.

Did Jesus Fulfill the Law? “Do not think,” Jesus said, “that I have come to abolish the Law or the Prophets.” Yet that is precisely what many Christians do think. It is because of Jesus, they reckon, that we may ignore the Law. But he explains that his achievement with respect to the Law is a different one. “I have not come to abolish, but to fulfill” (Matthew 5:17). Our task, then, should not be to look for the expiration date, but for the fulfillment date.

Fulfillment is a great refrain throughout the Gospels. Fourteen times, Jesus or one of the evangelists refers to some Scripture being fulfilled. Likewise, the New Testament letter to the Hebrews sees in Jesus the fulfillment of so much of the Law.

Jesus is our great High Priest and our Paschal Lamb. He is the offering without blemish and the once-for-all atoning sacrifice. He is the serpent hung on a pole and the scapegoat that carries off the sins of the people. He goes behind the veil into the Holy of Holies, and it is his blood that is sprinkled as cleansing, as sanctification, and as the blood of the new covenant.

Now someone says, “Isn’t this just a matter of semantics, a distinction without a difference? What does it matter whether we say the Law is ‘expired’ or ‘fulfilled’? Either way, we don’t have to worry about it anymore.”

The Case of the Credit Card. Let’s say I have a credit card on which the embossed expiration date is three years from this month. Imagine that I take that card to make a purchase today, but the clerk returns it to me and says, “I’m sorry, I can’t accept this card because it’s expired.”

I’m surprised and puzzled as I take the card back. After looking at it again, I reply, “No, no, it doesn’t expire for three more years!” I direct her attention to the date on the card.

“Yes, I know that’s what the card says,” she responds, “but I say that it is expired now.”

That would be ridiculous, of course. It is not the prerogative of a cashier to tell me that my credit card has expired. The expiration date can only be set by the bank that issued the card.

And so it is with the Old Testament Law – and with the larger whole of Scripture, as well. The only One who is eligible to say that any part of the Law (or the Bible) is expired is the One who issued it.

In mainline American Christianity, however, we commonly take that prerogative for ourselves. It would be amusing if it weren’t so serious. And our guiding principle is equally amusing, and fairly transparent. Simply: we tend to edit out of Scripture the parts we don’t like.

I suppose it was alright, when I was a boy, for my mother to cut the crust off of my bread because I didn’t like that part. It is not alright, however, for me as an adult to cut off parts of the Bible because I don’t like them. From the New Testament on, Christians have understood that certain parts of the Law have been fulfilled. The rituals, the symbols, and the blood all point us to Christ. Since Christ has come, we no longer need to settle for his antecedents, but we may rejoice in them and be edified by them in the same way we are by the symbols that may adorn our sanctuaries.

Likewise, we know that God has established a new covenant with a new people. Some of the signs and practices that were meant to identify the Old Testament people of God are no longer applied to the New Testament people of God. We have other signs and practices that identify us. And therein lies the key to better understanding our relationship to the Old Testament Law. Some particulars change from Old to New, from Israel to the Church, from Law to Gospel. Some particulars change, but the principles remain.

The Psalmist understood that those who live according to the Law are happy, that his instructions are a source of pleasure and wisdom, and that the teachings of the Law give freedom. The Psalmist says that the Law is worth more than earthly treasures, that it is perfect, and that it is eternal.

It is not milk, you see. It does not go bad.

David Kalas is the senior pastor of First United Methodist Church of Green Bay, Wisconsin. This article is adapted from The Gospel According to Leviticus: Finding God’s Love in God’s Law (Abingdon). It is reprinted by permission.