A Primer on the Conflict (Part I) 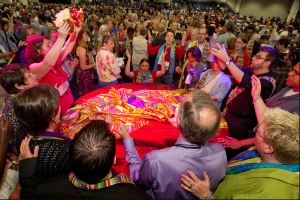 Protesters against the United Methodist Church’s stance on sexuality prepare to serve Holy Communion inside the bar of the 2012 General Conference in Tampa, Florida. A UMNS photo by Mike DuBose.

In conversations and emails, I have frequently heard frustration and confusion regarding the situation in The United Methodist Church. Perhaps a succinct overview of our conflict will be helpful to people who are lost in the details or new to engaging with it. Naturally, this summary is offered from the point of view of a traditionalist, and others may see events differently.

The conflict in our church dates back to 1972, when the Board of Church and Society proposed the very first Social Principles for the new United Methodist Church (founded in 1968). One of the provisions in the proposal indicated a sympathetic affirmation of lesbians and gays and same-sex practices. Traditionalist delegates at General Conference were concerned that the biblical position regarding same-sex behavior was disregarded, and the conference voted to add words clarifying that “the practice of homosexuality is incompatible with Christian teaching.” Those words have remained in our Social Principles ever since.

Almost immediately, those who disagreed with a traditionalist position began lobbying to remove those words and change the church’s position to one of affirmation of same-sex practices. The church was not able to effectively deal with instances of high-profile disobedience through the normal accountability channels. This led to the addition of language in subsequent General Conferences mandating “fidelity in marriage and celibacy in singleness” for clergy, prohibiting the candidacy, ordination, or appointment of “self-avowed practicing homosexuals,” or the performing of same-sex weddings. Each time language was added, it was to close a loophole in the accountability process in order to maintain conformity with the church’s teaching.

Over the past 47 years, there have been several church-wide studies, many annual conference task forces, and numerous dialogs between persons with opposing perspectives, seeking to come to some common ground. Often, these experiences were heavily weighted toward a liberal understanding of affirmation and were seen by traditionalists as a way to try to manipulate the church into changing its position. Regardless, the outcome at every General Conference has been to affirm the current teaching of the church.

The closest the church came to changing its position was in 2012, when a motion to say that the church is “not of one mind” on these concerns failed 54 to 46 percent. At the 2016 General Conference, efforts to reinforce the long-standing position of the church were in the process of being passed by a greater margin than before, and there was talk that the church might split over this conflict.

In response, the Council of Bishops proposed forming a Commission on a Way Forward (COWF) to find a way to resolve the conflict. The 2016 General Conference agreed, and all proposals regarding sexuality were put on hold. The Commission came up with three proposals: a Traditional Plan to strengthen accountability to the church’s current position, a One Church Plan to allow annual conferences and local churches to determine their own stance on same-sex marriage and ordination, and a Connectional Conference Plan to create three new “jurisdictions” within the UM Church, based on viewpoint on ministry with LGBTQ persons.

A special General Conference was held in St. Louis in February 2019 to address the COWF proposals. The Traditional Plan passed by 53 to 47 percent. However, about half the provisions of the Traditional Plan were declared unconstitutional by the Judicial Council. More problematic than the actual voting were the vitriolic rhetoric and personal attacks in speeches from the floor, particularly by some centrist and progressive delegates.

Following the special General Conference, some bishops and as many as 28 annual conferences in the U.S. declared that they would not abide by the Book of Discipline on these matters. They declared that they would operate as if the One Church Plan had passed. This has thrown the UM Church into a constitutional crisis. When a sizable portion of the church is unwilling to live by our duly adopted policies, there is a stalemate.

It is this constitutional crisis that has led most leaders in the church to come to believe that some form of separation is necessary (or is inevitable) in order to resolve the conflict. Various proposals for separation are on the docket for the 2020 General Conference, to be held in May in Minneapolis.

Traditionalists are persons who believe that the biblical teaching is that sexual relations are to be reserved for a marriage between one man and one woman, ruling out same-sex relationships. Most traditionalists would see the allowing of same-sex weddings and ordination in the church as a violation of the authority of Scripture, view it therefore as an essential issue, and could not continue in a church that allowed it. Organizations that promote a traditionalist view are Good News, The Confessing Movement, UM Action (a program of the Institute on Religion and Democracy), and the Wesleyan Covenant Association (WCA). The WCA was formed in 2016 to prepare for a “next” Methodism in case a separation should occur. The other organizations have been devoted to reforming and renewing The United Methodist Church through the governance process of General Conference and annual conferences. These four organizations work together as part of the Renewal and Reform Coalition.

Centrists are persons who are “compatibilists” on the question of LGBTQ ministry. They believe that various opinions and practices can co-exist in the same church body because this is not an essential issue. A few centrists are traditionalists who can live in a church that allows same-sex weddings and ordination, as long as they themselves are not forced to violate their own principles. Some centrists have not made up their mind on LGBTQ ministry. Most centrists favor the church allowing same-sex weddings and ordination, but are willing to also allow in the church those who disagree and do not practice these things. Organizations promoting a centrist viewpoint are Uniting Methodists, Mainstream UMC, and UMC Next (which is really a coalition of centrist and some progressive leaders).

Progressives are persons who affirm same-sex relationships, weddings, and ordination. Some are willing to push the envelope by engaging in ecclesiastical disobedience to the Book of Discipline in order to promote change in the church’s position. Demonstrations by some progressives have shut down portions of every General Conference meeting since 1992 (except for 2016). Cultural changes in the U.S. have prompted progressives to become impatient with the slow rate of change in the church, contributing to their willingness to violate the Discipline, particularly since 2011. Organizations promoting a progressive viewpoint include Affirmation, Reconciling Ministries Network (RMN), the Methodist Federation for Social Action (MFSA), and UM Forward. MFSA is a social justice organization that has been in existence for over 100 years that promotes liberal positions on social and political issues. RMN promotes local churches and small groups becoming Reconciling Congregations or Ministries in support of LGBTQ persons. These and other groups work together in the Love Your Neighbor Coalition. UM Forward was recently formed to give priority to persons of color and other marginalized people by using “intersectionality” to link together the struggle for social justice across many issues (e.g., racism, sexism, and LGBTQ). They prefer the term “liberationist” to progressive.

The Role of Central Conferences

The African church is over 95 percent traditionalist in perspective. Their voting strength is sometimes diminished, however, by delegates unable to obtain visas to attend General Conference. This reduced the vote total of Africa by over 30 votes in St. Louis on a proposal that passed by only 54 votes. (It would have been 84 had all the delegates been present and voting.)

Traditionalist delegates from the central conferences have consistently supported the current position of the church regarding LGBTQ persons. They voted solidly for the Traditional Plan in St. Louis, which is why it passed. These delegates can be counted on to continue voting for the Traditional Plan (and against attempts to repeal it) in 2020. Whether they would be willing to vote for an amicable separation plan is uncertain, but we have received positive input from leaders in all three geographic areas.

Next week, we will discuss the strategies being pursued and the plans to be considered by the 2020 General Conference.