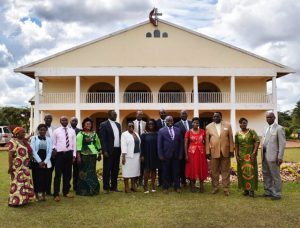 The Zimbabwe Episcopal delegation stand in front of Joli Site Church in Galilee during their visit in the South Congo Episcopal Area. Photo by Chenayi Kumuterera, UM News.

KOLWEZI, Congo – Inspired by the story of Barnabas (Acts 4:36), who sold his land and gave the money to the early apostles, members of Jerusalem Francophone United Methodist Parish donated their salaries, pledges, and other gifts to construct Centennial Memorial Temple.

Accommodating more than 5,800 people, the temple is the largest structure of Joli Site Church in Galilee District, South Congo Conference. Construction took seven years. Their contributions were worth the equivalent of $2.5 million. (The average annual income in the Congo is $400.)

“It all started with a collective awareness of trying to build a temple where we would be comfortable praying and worshipping because of the growing numbers of worshippers each Sunday,” said Gomer Chamusa Kasweshi, lay leader. “The administrative council at that time had decided to save money and to call people of goodwill to contribute to the purchase of land at the entrance of the city on the side of the international airport of Luano.” Now, he noted, “we are focused on raising funds to finalize the ceiling and continue with other social projects such as education and health and the construction of pastoral homes.”

When the land was acquired, the administrative council set up a construction commission of volunteers and other committed people to contribute to the project. They were asked to raise $100,000 from voluntary contributions. Competitions and other fundraising strategies were developed.

“Joli Site Church was built through collection of funds from members of the local church, commitment of each member of the construction committee to give a fixed amount each month and commitment of parish families to offer their monthly salaries,” said Masengo, senior pastor. “Other families were committed to donating all the doors of the church,” he added. “Other families pledged to pay part of the bill of the contractor who had fixed the roof. This was amazing.”

At the laying of the first stone, the former governor of Katanga, His Excellency Moise Katumbi Chapwe, who is not a United Methodist, contributed 5,000 bags of cement to the project.

“I [have] witnessed state-of-the-art buildings (sanctuaries, parsonages, offices, and fellowship halls) built by individuals and families,” said the Rev. Gift Machinga, chair, Zimbabwe East Conference Board of Discipleship. “The biggest and most beautiful church, Joli Site in Galilee District, is a case in point. This is the highest level of giving to be witnessed anywhere.”

Chenayi Kumuterera is a communicator with the Zimbabwe West Conference.