Worshipping without Walls in Zimbabwe 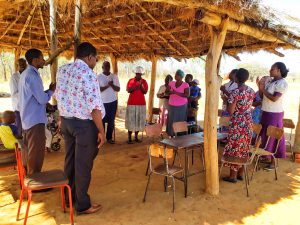 By the Rev. Tauri Emmanuel Maforo –

John Wesley’s “The world is my parish” is being relived in Muzarabani Circuit as congregants worship under grass-thatched homesteads and pole sheds.

A cappella music and ululating filled the humid atmosphere while rhythmic dance movements, sometimes with an accompaniment of shakers and an African drum, characterized the worship scene. Having no walls around the worshippers seemed far from being an obstacle to the celebrations.

Out of the nine local churches and preaching points in Muzarabani, only one has a built up sanctuary. It’s named after John Wesley. “In spite of the droughts and hardships faced by the region, the church seems to be more inspired by their biblically-inclined names …” said Pastor Desmond Mundondo, who is appointed to the circuit.

“Yes, we sometimes have to brave the rainy and windy seasons,” said Edward Shanyurai, who joined The United Methodist Church in 1992 and never turned back, “but, weather conditions are not deterrent for our worship.”

The 80-year-old Shanyurai believes anything important is worth sacrificing for. “We sometimes plough our fields while it rains, so why not do the same for our God?”

“I have now come to realize what John Wesley meant by ‘the world is my parish’ and why the early church braved persecution shut up in their house churches,” said the Rev. Phillip Musharu, the Harare West district superintendent.

Musharu went around nine preaching points on a two-day, face-to-face visit to the circuit. The preaching points are all under one charge and one pastor. The pastor travels up to 140 kilometers (about 87 miles) to the furthest preaching point. The area is not easy to get to by public transport. Total average attendance for the churches ranges from 230 to 270.

The Muzarabani Church was started by the Chinyerere family who moved to the region (which had no historical roots of United Methodism) and began to spread the Christian message from their home. Muzarabani is a district that is relatively flat and situated along the Zimbabwe/Mozambique border in Mashonaland Central province in Zimbabwe.

The villagers of the region in the 1980s struggled with tsetse flies and have perennially been stalked by severe droughts and floods. The plight of the residents is further compounded by the hostile, unpredictable weather conditions.

“But, faith life continues to grow warm in the hearts of the ardent seekers who have become strong United Methodists in spite of their material challenges” Mundondo said.