Should we Abandon the Old Testament? 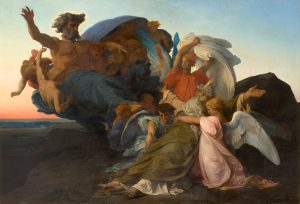 As Christianity continues its numeric decline in the West, we in the church rightly look for ways to reverse this trend. In this new book, Irresistible: Reclaiming the New That Jesus Unleashed for the World (Zondervan, 2018), Andy Stanley offers a diagnosis for our decline, along with several solutions. For Stanley, senior pastor of North Point Community Church in the Atlanta area, a faith that was once irresistible is now all-too-resistible. In the early centuries after Jesus, the Christian faith spread like wildfire. Today, however, we suffer the effects of generation after generation having misrepresented the true faith Jesus came to reveal. The result is that more and more people are walking away from the church.

Our great error in the twenty-first century church, according to Stanley, is primarily theological: we have blended the old and new covenants. This is nothing new, he says, but it was not always so. The earliest Christians knew that God had done away with the old covenant once and for all and had replaced it with a new covenant through Jesus Christ. The old covenant, established at Sinai, had one way of doing things. The new covenant has another. To blend the two covenants is to undermine the power of the new, the very power that once made it irresistible in the early generations following Jesus.

Stanley spends most of the book establishing a few major claims: the old covenant is legalistic, judgmental, and unnecessarily harsh. In the new covenant God has made the old obsolete. We now have a covenant rooted in the grace of God, one that compels us in all our actions to ask what love requires. The Old Testament (OT) contains the old covenant. The New Testament (NT) tells us about the new covenant. When we claim that we are saved according to the new covenant, but still act as if we are under the old (living according to OT teachings), we are blending the covenants, and thus rejecting God’s work in Jesus Christ.

Let me be entirely honest: I disagree with virtually every major premise of this book, save the claim that Christians live within a new covenant that God has established through Jesus Christ. Its problems are both historical and theological. For example, one historical problem emerges in Stanley’s discussion of the way in which early Christians regarded the Jewish Scriptures. He seems to believe that the earliest Christians somehow devalued or even outright rejected them. At one point he writes, “[I]magine how first-century, Jesus-following Jews felt when it was suggested that they bid farewell to texts that shaped their culture and consciences” (151). At another point he remarks, “[T]he credibility of our faith has never hung by the thread of the credibility of a collection of ancient texts. Even inspired ancient texts. Especially Old Testament texts. Once upon a time, a group of textless Jesus followers, sandwiched between empire and temple, defied both” (306, italics original).

Frankly, I don’t know what to do with statements like this one. It is quite simply historically inaccurate.  Though they did come to understand their Scriptures in a new way, Jesus’ first followers did not “bid farewell” to their sacred texts, nor did Jesus ever suggest that they do so. Jesus and his first followers were firmly planted in the soil of the Jewish Scriptures. Paul relies heavily upon these texts, as do the Apostolic Fathers, Irenaeus, and Clement of Alexandria. The second-century apologist Justin Martyr writes that the early Christians with whom he would gather would read from the gospels or the OT prophets for as long as time would allow. Much of the earliest Christian art consists of depiction of OT figures such as Moses, Noah, Jonah, and the three young Hebrew men in Nebuchadnezzar’s fiery furnace.

The third-century Christian theologian Origen of Alexandria (185-254) thought the OT so important that he undertook a massive project to establish the most accurate possible rendering of these texts. Over two decades he developed a document called the Hexapla in which he compared the Hebrew Bible (in Hebrew and transliterated into Greek) and four versions of Greek translations of the Hebrew Bible, including the most well known and widely used version, the Septuagint. This work consisted of around 6,000 pages, and its cost must have been phenomenal. Why in the world would Origen have invested so much time, labor, and money in a project to reconstruct the earliest OT text if the early Christians devalued them in the way that Stanley describes?

Another historical problem emerges in Stanley’s discussion of Athanasius’ Festal Letter 39 (A.D. 367), the first witness we have to our twenty-seven book NT canon. Stanley writes, “The documents that made Athanasius’ list and eventually our list, were considered valuable, credible, and reliable the moment they were written” (303). Again, this is simply incorrect. Some of the works on Athanasius’s list were widely accepted early on. In the second century there began to emerge collections of the four gospels and Paul’s letters. 1 Peter and 1 John were also widely accepted before the beginning of the third century. Other works, such as Hebrews, James, 2 Peter, 2 and 3 John, and Revelation, were slower to find acceptance. They were held in suspicion by some parts of the church. Revelation had a particularly difficult time in the Eastern churches. The process by which we came to understand the authority and inspiration of the twenty-seven books of the NT we recognize today was slow and messy.

These historical problems, however, are outmatched by the book’s theological problems. For example, at one point Stanley writes, “Christianity begins with Jesus, not Genesis,” (284). Matthew and Luke apparently disagree. Both evangelists include genealogies in their Gospels that trace the story of Jesus back through the stories of Israel, all the way back to – you guessed it – Genesis. Jesus did not simply appear out of thin air. He stands within the salvation history of Israel as the one who extends that salvation to all the world.

Stanley argues, however, that God has done something entirely new in Jesus Christ, and what came before (i.e., the OT)  is merely the “backstory.” Sure, you might find the “backstory” interesting, even helpful in some ways. It is not, however, the basis of our faith, nor is it binding upon us as Christians. At one point he writes, “The Christian faith doesn’t need to be propped up by the Jewish Scriptures,” and, “In a post-Christian context, our faith actually does better without old covenant support” (278).

In keeping with his deflationary view of the authority of the OT, Stanley makes some rather radical suggestions regarding how we should speak about and order the writings contained in the Bible. “What if, instead of Old and New Testaments,” he writes, “our texts were labeled the Hebrew Bible and the Christian Bible. That’s clearer and more accurate” (280). It’s only more accurate, however, if you’re willing to concede that the Old Testament is not properly a part of the Christian Bible. Since, however, the church has never affirmed this at any point in its history, and in fact has specifically repudiated it, we would be wise to reject this suggestion.

Christians sometimes refer to the OT as the “Hebrew Bible.” In so doing, they are attempting to demonstrate their rejection of supersessionist theologies (i.e., theologies according to which Christianity has utterly replaced Judaism) and show respect to Jewish people. Stanley’s rationale is that, because both “testament” and “covenant” are translations of the same Greek word, diathēkē, when we use the term “Old Testament” we suggest that there is nothing more in this body of writings than the old covenant. He insists, however, that the OT “includes more than the old covenant. A lot more” (280). Given that there is “a lot more” in the OT than the Sinai covenant, why should we unhitch from the entire OT? The answer to this question never becomes apparent.

He also picks up the idea that referring to these works collectively as the Hebrew Bible will be less offensive to Jewish people. “[I]f you start referring to the Old Testament as something other than old, it isn’t going to hurt God’s feelings. It wasn’t his idea. And referring to it as something other than old may reduce the number of Jewish feelings we hurt along the way” (283). Never mind that he spends the better part of the book describing the Jewish Scriptures as obsolete, irrelevant, and barbaric. At one point he refers to the “legalism, hypocrisy, self-righteousness, and exclusivity that characterized ancient Judaism” (146). Were a Jewish person to read Stanley’s book, the use of term “Old Testament” would not likely rank among its more offensive elements.

“For the sake of clarity,” Stanley continues,” perhaps the Christian Bible should precede the Hebrew Bible in our published texts” (284). He goes on to suggest, “Perhaps our Bibles should begin with Luke” (284). The lack of even a hint of deference to Christian tradition – the judgment of the saints and martyrs who have passed on the Church’s faith to us – is utterly stupefying.

Stanley rightly describes Christians as people of the new covenant, noting that we are not bound by or saved by the law. That’s Christianity 101. Yet as he himself points out, the OT involves much more than the old covenant. The Old and New Testaments together provide us with a single great narrative of salvation. Each is incomplete without the other. In Romans 11:17-18, Paul writes, “If some of the branches have been broken off, and you, though a wild olive shoot, have been grafted in among the others and now share in the nourishing sap from the olive root, do not consider yourself to be superior to those other branches. If you do, consider this: You do not support the root, but the root supports you” (NIV). The OT is more than the “backstory.” It is the unfolding of God’s great plan of salvation in human history, a plan that will emerge out of Israel in Jesus Christ.

While we are not bound by the law, moreover, the OT does reveal to us certain principles about the moral fabric of God’s creation. Stanley acknowledges this (p. 166), but it doesn’t seem to do any heavy lifting in his argument. I agree with him that we do not refrain from, say, theft because the law commands that we do so. Rather, we refrain from theft because, in God’s ordering of creation, it is wrong to take what belongs to another person. The OT commandments against theft simply give voice to this. In dialogue with the NT, Christians can extrapolate other ethical principles from the OT as well.

I don’t dispute that Andy Stanley is a man of God who has made many important contributions to the life of the church. In this book, however, he has missed the mark. I cannot recommend it for any type of use in the church. The inspiration and authority of Scripture have come under attack quite commonly in recent years by people who wish to see a resurgence of Christian practice. I, too, wish deeply to see our churches fulfilling the Great Commission of Matthew 28:18-20. The way to do this, however, is not by neglecting what God has revealed to us as canon – a rule or measuring rod for Christian faith and practice. On the contrary, a deeper engagement with Scripture, rather than a more limited one, will stoke the fires of revival.

David F. Watson is the academic dean and professor of New Testament at United Theological Seminary in Dayton, Ohio. He is the author of Scripture and the Life of God (Seedbed).