A Second Rise of Methodism 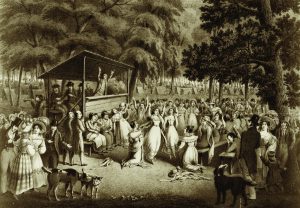 Camp meetings and other types of religious services were conducted regularly by Methodists. (Lithograph of 1829 camp meeting, Library of Congress).

As The United Methodist Church prepares to meet in St. Louis next year for the special-called General Conference to decide its future, now is a good time to take a sober assessment of the state of our current denomination.

• Over the last forty-eight years, it has lost over four million members. The numerical decrease equals the combined memberships of the United Church of Christ, the Episcopal Church, and the Presbyterian Church USA.

• American Methodism has declined from 6.5 percent to 2.15 percent of the American population.

• Today, one-third of the UMC’s membership is over sixty-five. Another 30 percent is between 50 and 64. Only 9 percent is under thirty.

• The Western Jurisdiction membership has plunged by 10 percent since 2013.

Sociology of religion theories explain that when churches try to lower the barrier between biblical faith and secular practices by embracing secular values, traditional members become alienated and secular people aren’t evangelized. Moreover, spiritually hungry people who could be evangelized are more likely to go to traditional churches. In short, contextualizing Christianity to accommodate secularism is not a proven approach for reaching unchurched secular people. To put it bluntly, large percentages of people are still going to church. However, the UM share of the pie has grown exceedingly small.

The marriage and sexuality debate illustrates this issue. Every U.S. denomination that has embraced gay marriage and the ordination of gay clergy has experienced drastic numerical declines. Most of those denominations rightly anticipated that traditional members would flee to other churches. However, they wrongly believed that large numbers of unchurched gay and gay-friendly people would fill the void by joining their churches. The common notion that LGBT people will become practicing Christians if the church endorses homosexuality hasn’t proven true. In reality, churches that hope to win the secular masses must challenge secular identity by presenting an alternative identity, one that appeals to some unrealized felt need and feeds a spiritual hunger that can only be satisfied through a transformational relationship with Jesus.

Fortunately, American Methodist history offers a point of reference from which the current malaise can be analyzed. Early American Methodism was evangelistically potent and fully counter-cultural. From its founding to the mid-1800s, it experienced exponential growth. In 1812, it became the largest denomination in America. This is the great miracle of Methodism. In a mere twenty-seven years from its founding in 1784, Methodism fully upended the established churches with its message of holiness, exuberant worship, and experiential faith.

The relentless emphasis on holiness and spiritual growth necessitated a corresponding stress on keeping the discipline. For example, Methodist preachers didn’t give altar calls to invite people to join the church. Instead, they pleaded with the people to flee from the wrath to come. When a hearer felt deep conviction, the awakened person would be invited to join a Methodist class. Through participation in the class, the seeker would experience guided spiritual growth. After six months to a year, the new class member could be given a class ticket and be enrolled in the society. Only those who were enrolled in society were counted as members.

Because of the need to keep the discipline, the circuit riders tested the members on a regular basis. Those who didn’t follow the rules were purged from the society or returned to probationary membership. Wesley defended the need for purging members who didn’t evidence growth in grace because half-hearted members destroyed the spiritual vitality of the church and hindered others from going forward in grace.

Early American Methodism was so intent on maintaining its stringent membership standards that the relationship of members to participants was 1:12. One arrives at that number from the correspondence of the bishops. In 1791, Bishop Coke bragged that the adults which made up the Methodist congregations equaled 750,000. If Coke would have included children, the number would have swelled to over one million! In that year, the membership was 61,082. In 1797, Bishop Asbury said that one million people were their regular hearers. No one knew Methodism better than Asbury. 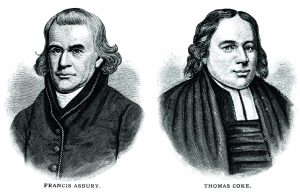 Furthermore, if one counted participants instead of members, American Methodism would have become the largest church in America a mere decade after it was founded! As appealing as that might have been, the bishops knew that they could not lower the membership standards to allow attendees to join until they accepted the discipline. Yes, in early America, being a Methodist meant that a person was a disciple of Jesus Christ.

Today, from their exalted places in heaven, Bishops Coke and Asbury are pleading with the current bishops to keep to the discipline. Will the UM bishops remember our heritage and the reason why God raised up the people called Methodist? Placating the progressive wing won’t grow the church, gain social influence, stave off massive membership decline, evangelize the secular masses, or advance the reign of God.

In addition to its disciple-making apparatus, early American Methodism grew because stalwart circuit riders bravely endured great privation to preach the gospel to the burgeoning population. Circuit riders didn’t live in parsonages or drive comfortable cars when they did their work. They didn’t even preach in many church buildings. Rather, they traveled the country by horse. Since they didn’t earn enough money to sleep in taverns, they had to get lodging wherever they could find it.

The total dedication of the circuit riders to the evangelistic mission entailed extreme poverty. Since they lived on the road and only earned $64 a year, marriage was not an option. Plus, many didn’t receive their full salary. All of this led to malnutrition, disease, and premature death. Most died at a young age. This gives new meaning to why the assembled preachers began every conference by singing the Wesleyan hymn, “And Are We Yet Alive?”

History shows that God worked through the sacrificial efforts of the small army of Methodist preachers. They covered America in a loose web of circuits and corresponding preaching points. In time, that network led to the founding of an evangelical church in every city, hamlet, and outpost in America. Rapid membership growth and social transformation followed. In short, early American Methodists didn’t accommodate the culture. They changed it!

Yes, God raised up American Methodism to evangelize the land and spread the message of holiness. In fact, the work of early Methodists was so successful that it did more to shape the Christian ethos of the emerging American Republic than any other social force. Furthermore, the spiritual foundation that it helped to lay is a primary reason why America has not gone the way of Western Europe and Canada.

As United Methodists look forward to the specially called General Conference, the delegates must consider the unfinished business of the last General Conference. Before the UM Church can look forward and see with clarity where God wants it to go, it should look backward and rediscover why God raised up this church. A denomination that separates itself from its heritage and its ethos will never find spiritual vitality, social influence, or numerical success.

The future of American Methodism is in the balance. Thankfully, a new report from Harvard University gives cause for great optimism. “Recent research argues that the United States is secularizing, that this religious change is consistent with the secularization thesis, and that American religion is not exceptional,” reports sociologists Sean Bock and Landon Schnabel in Sociological Science. “But we show that rather than religion fading into irrelevance as the secularization thesis would suggest, intense religion—strong affiliation, very frequent practice, literalism, and evangelicalism—is persistent and, in fact, only moderate [secular] religion is on the decline in the United States…. The intensity of American religion is actually becoming more exceptional over time.”

In truth, God has left an open door in the American landscape. Secular and moderate religion won’t succeed. Evangelical churches have an opening to discover a secular field that is ripe unto harvest. Will United Methodism remain true to its heritage and mobilize an army of dedicated preachers to evangelize the secular masses? If the UM Church doesn’t go through the open door and reap the ripening harvest, God will give American Methodism’s torch to another church. The choice is ours. 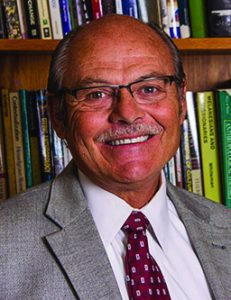 William P. Payne is the Harlan and Wilma Hollewell Professor of Evangelism and World Missions at Ashland Theological Seminary. He is an ordained United Methodist elder in the Florida Annual Conference and the author of American Methodism: Past and Future Growth (Emeth, 2013) and Adventures in Spiritual Warfare (Wipf and Stock, 2018).