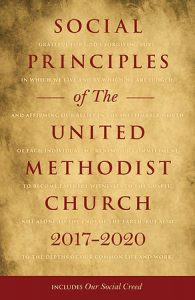 The 2012 General Conference commissioned the Board of Church and Society to do a total rewrite of the United Methodist Social Principles. The project is moving toward completion with the publication of the first draft of the proposed new principles.

The aims in drafting the new principles were to make them:

Since their introduction in 1972, the Social Principles have been added to and elaborated on. It has grown from 42 paragraphs in 1980 to 76 paragraphs in 2016. In 1980, the Social Principles took up 18 pages in the Discipline, and in 2016 they took up 40 pages using smaller type! And there is no disputing that the perspective on social issues is extremely U.S. centric and often not applicable to countries in other parts of the world where 40 percent of United Methodists live.

In general, the new Social Principles accomplish the goals set for them. They are more succinct, scaling back to 60 paragraphs instead of 76 and substantially shortening some of the paragraphs. However, they were only able to pare back from 2016’s 15,000 words to now 14,000 words, with two paragraphs left to add. At first read, it still seems like there are some areas of overlap and duplication that could be consolidated, and there could be further shortening to reduce the overall length.

There has been an effort to incorporate more Scripture references into the principles and to set a theological context for many of the topics, which is helpful. Unfortunately, the effort to provide Scriptural background sometimes results in the twisting or misapplication of a given passage. For example, the section on military service uses Jesus’ exclamation from Luke 19:42, “If you had recognized on this day the things that make for peace!” as an argument for peacemaking. In fact, Jesus is talking here mainly about peace with God through accepting Jesus as the Messiah, rather than human efforts at resolving conflict in non-military ways.

The attempt to make the Social Principles more globally relevant has resulted in far less specificity in the principles. Rather than addressing specific concrete dilemmas, they speak in broad generalities. This does enable the principles to translate better into a variety of global contexts. On the other hand, they tend to be much blander and not as helpful in addressing the real ethical and moral issues underlying the statement.

Many of the principles tend to address the topic in a more superficial way without wrestling with the competing values that often are the source of controversy. For example, the principles on migration, immigration, and refugees extol the value of welcoming the stranger and providing radical hospitality, but fail to mention the need to preserve national boundaries and protect a nation’s citizens. All these values are important and supported in Scripture, and the difficult moral reasoning is seeking how to balance them.

Distressingly, some of the more controversial areas saw a decided swing toward a more progressive approach. This is especially true in the principle on abortion, where all the nuanced language added in the last 20 years has been jettisoned in favor of the eerily unqualified statement, “We support legal access to abortion.” There is no examination of any parameters to legal abortion or any hint that abortion should be restricted in any way or that abortion is the tragic loss of a life. It is treated as a neutral decision, and the focus of the principle is on preventing unintended pregnancy.

Similarly, the principle on marriage and divorce fails to set forth any kind of theological understanding of marriage, other than to say it is one form of human relationship in which we ought to treat one another with humility, gentleness, patience, and love. Marriage is not defined, skirting the challenges of polygamy or same-sex marriage. Much more space is given to situations when marriage has gone wrong (abuse, exploitation, divorce, child marriage) than in setting forth what can be done to strengthen marriages or why marriage is important.

On the other hand, the principle on “Military Service” is well balanced, affirming both the pacifist perspective and the “just war” perspective (although it is not named such in the principle). The parallel principles on “War and Peace” and “Peacebuilding” emphasize peacemaking without acknowledging situations where armed conflict may be unavoidable. This is one instance where combining the three principles could yield a more balanced and comprehensive understanding of the issues involved.

The hot-button paragraphs on “Human Sexuality” and “Rights of Persons of All Sexual Orientations and Gender Identities” were not included, pending the 2019 General Conference’s decisions on these issues. However, the principle on “Gender Equality” implies the acceptance of multiple genders beyond male and female and plainly states, “Discrimination based on gender identity is a sin.” This is obviously beyond where many United Methodists are prepared to go.

The Board of Church and Society is looking for feedback on this initial draft of the Social Principles. Comments can be entered on this web link. I would encourage you to read the proposed principles and give your feedback to help influence the second draft. The final product will come to the 2020 General Conference for approval. As they stand now, there is a lot of room for improvement.

Tom Lambrecht is a United Methodist clergyperson and the vice president of Good News.