Swimming Against the Stream 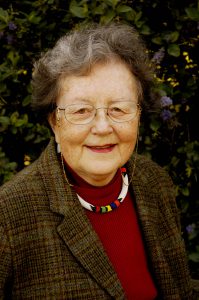 The Rev. Jeanne Audrey Powers died while traveling in Switzerland on September 29, 2017. She was 85. The obituary from the Minnesota Annual Conference was on target: “Always on the leading edge of historical shifts in culture, Rev. Powers was a global-level advocate for a more progressive, inclusive faith, focused on inclusive language, relevant liturgies, LGBTQ struggles, and opening leadership opportunities to women, young people, and people of many cultures.”

Let us mark her passing by expressing heartfelt respect for Powers – even though Good News was on the opposite side of key issues within United Methodism. Over the years she served in various capacities, most notably with the General Commission on Christian Unity and Interreligious Concerns, and the World and National Councils of Churches. Her obituary properly notes,“Until her death, she was a driving force in the Reconciling Ministries Movement and she came out as a lesbian during her sermon at its national gathering in 1995.” She was 63 years old at the time.

While she was widely praised throughout the UM Church for the courage of her decision, the Good News board of directors stated its belief that her public declaration was “openly defying the witness of the United Methodist Church” and “raising the challenge as to whether United Methodism can and will effectively enforce its own Discipline.”

Despite Good News’ opposition to her announcement, the Rev. Powers was a faithful paying Good News subscriber until her death. Last year, she called our offices to check on her subscription and kindly reminded us that she was on “the other side” but also said she loved our magazine because she felt we did a good job of explaining difficult issues. For the editorial team, this was a treasured comment.

Powers was an unapologetically liberal lioness, but she was also gracious, fair-minded, and intellectually curious. During her twilight years, we were able to let her know our appreciation of her consistent readership. In this day and age, we are gratified when progressives like Powers are willing to read publications outside their echo chamber. Conservative evangelicals are best served when they do the same.

Recently, we were startled and disappointed to read one of our leading United Methodist bishops publicly admitting “having given up Christian Century (too predictably liberal), Christianity Today (too Calvinist) and First Things (too predictably conservative) long ago” and only subscribing to a Quaker publication.  We have no need to criticize this leader’s desire to winnow down his reading list. We trust that he is a vigorous thinker and lifelong learner. We would simply ask that the subscription decisions be reconsidered. Of course, this is an important issue to us. We gain a lot from journals of opinion – as would UM clergy and laity. Although we are an independently-supported magazine with a decidedly evangelical and traditionalist viewpoint, we put a premium value on fairness, charity, and reliable journalism. We welcome readers – the ones who agree and the loyal opposition.

“I have chosen to swim against the stream in many areas of controversy [in the church] because I truly believe that the Church is the Body of Christ, called to share its message of healing, reconciliation, and yes, salvation,” said Rev. Powers. “I do not choose the Church simply because I want to belong, but because I believe in its transforming Spirit.”

We did not agree upon many things, but we share a belief in her words above. Despite our differences, we will always be grateful for her graciousness and eager willingness to read broadly. Jeanne Audrey Powers, RIP.