Love in Action for Lepers 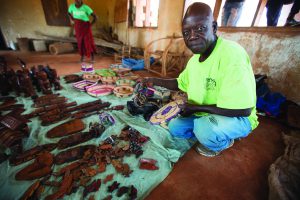 John Farr displays carvings and baskets that he makes to help support himself at the Ganta Leprosy and TB Rehab Center. The center is part of the United Methodist Ganta Mission Station in Ganta, Liberia. Photo by Mike DuBose, UMNS.

When John Flomo was 15 years old, he contracted leprosy and was sent to the Ganta Leprosy and TB Rehab Center for treatment. That was in 1966. He never left. “Long time. Many buildings have been built since I came,” he said. “They take care of me, feed me, give me a place to sleep.” (The rehab center is located in Ganta, the second most-populated city in the West African nation of Liberia. There are 275,500 United Methodists in Liberia.)

With nimble hands missing most of their fingers, Flomo weaves baskets and carves wood to sell to have a little extra money. He uses it to buy additional food — his favorite is pepper soup, a spicy, gumbo-like stew. “I tell them ‘thank you’ plenty. My father, my mother, all of them died. So they take care of me. I tell God, ‘Thank you for them.’”

The center was founded in the mid-1920s by Dr. George Way Harley, an American Methodist missionary and physician. He built the Ganta Methodist Mission Station, which houses the rehab center as well as a school, church and the Ganta Methodist Hospital. “Dr. Harley came to Liberia in 1926 as part of the Harvard Medical Expedition, and once he set foot in Ganta, he never left,” said John Brimah, officer in charge of the rehab center.

“When he opened a clinic at the mission, many were coming and those who were coming had skin diseases, including leprosy,” Brimah added. “Because leprosy was a disease many were afraid of, other patients complained about being treated in the same place. So the mission clinic became solely for skin diseases and leprosy — this became a leper colony.”

“When we came here in the ’80s,” Brimah said, “we found some people who had been here for so many years already and they couldn’t go home. Those people are older and we have to care for them for their lifetime. There are about 18 of them.”

Leprosy is a chronic infectious disease that mainly affects the skin, the peripheral nerves, mucosa of the upper respiratory tract and the eyes. Leprosy is now curable, and treatment in the early stages can prevent disability. But the age-old disease, mentioned frequently in the Bible, was often accompanied by fears and misunderstanding. Many leprosy patients were shunned by their families and communities, even after they were cured.

Leprosy is mentioned many times in the Old Testament, but the story that is most familiar to Christians is the Gospel story of Jesus healing 10 men with leprosy.

For a long time, doctors who were monitoring the mission station also came to check on the patients and treat them. Around the 1980s, Brimah said, the Methodist Mission gave the clinic to the Liberian government. The government assigned Catholic missionaries to care for the patients. The clinical care responsibilities still fall to the Catholics, but The United Methodist Church owns the land, and the two consider the center a partnership. There is a United Methodist church on the grounds; the mission station sends pastors there to hold worship and tend to the spiritual needs of the patients, since many of them are unable to travel.

Pastor James Y. Koroloroblee, who is a vice principal at Ganta United Methodist School, is one of the preachers who leads worship at the colony. “People have been there since the 1950s and 1960s,” he said. “There’s a fellow there who came after treatment, went back to his sisters and they rejected him. He said, ‘I have a place where people are willing to accept me,’ so he left and came back here.”

Brimah said the staff mainly treats three diseases: leprosy, tuberculosis and buruli ulcers, which are large wounds afflicting many who work on farms in rural areas infected from swamps and still water. The staff of 65 treats around 150 patients at a time.

Marie Clinton has been a nurse on staff there since 1989. She described the process of cleaning and dressing patients’ wounds, which begins in the early morning until about 1 p.m. every day. “We soak them for 30 minutes in one liter of water to one tablespoon of salt, every day. With ulcer patients, sometimes we have to wash the wounds and cover with gauze. With leprosy patients, sometimes we have to put Vaseline around the wounds to prevent the skin from cracking.”

Sheraton Nyanaleh, an aid in the TB lab and a United Methodist, said he considers his work to be an extension of the church’s ministry. “For the ministry of Jesus, we believe in teaching, health and healing…. I’m proud to be United Methodist,” he said. 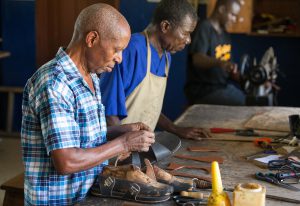 Cobblers make custom shoes and sandals for patients whose feet have been affected by leprosy at the Ganta Leprosy and TB Rehab Center. From left are: Porter Willie, John Giddings and Martin Dolo. The center is part of the United Methodist Ganta Mission Station in Ganta, Liberia. Photo by Mike DuBose, UMNS.

The rehab center also houses a shoe shop that designs and builds custom sandals for each patient’s unique needs. In addition, they assemble and repair wheelchairs, make armpit and elbow crutches, and make prosthetics when materials are available.

Shop worker Martin Dolo said that leprosy patients are susceptible to losing sensation in their feet. “We have to mold the shoe in a way that protects them from losing sensation and also when they’ve lost their toes. Without toes you lose balance. We mold in a way that they are comfortable and also retain their balance.” Dolo said the workers can make three to four pairs a day if the shoe doesn’t have intricate customization. Those may take an entire day to construct one pair.

John Giddings, who also works in the shop, has a long history as not only a worker but also a patient. “I was a patient in 1960; I was a little boy when I got sick. I was a patient, got discharged and came back to work,” he said. “This place means a lot to me, oh yes.”

Giddings has worked at the center for 32 years, but he’s got his eye on slowing down. “I’ve been holding the place here until we get a new man,” he said. “I hope this one here, Martin, will work out. I brought a young man so maybe I can retire!”

Joey Butler is a multimedia producer/editor for United Methodist Communications.