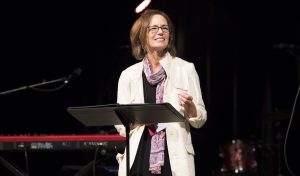 Great periods of Christian revival in the U.S. need not be consigned to the church’s circuit-rider past. Even without the saddle sores and sawdust trail of yesteryear, a new generation of Christians can be just as fired up with the Holy Spirit. That’s the basic idea behind the New Room Conference, an annual event that draws together United Methodists and other Christians in the Wesleyan family to “sow for a Great Awakening.”

The phrase “is so much more than a tagline to us,” said the Rev. David Thomas, a United Methodist elder and one of the event’s organizers. “We really believe that’s the only honest expression of our need.”

Throughout the conference on September 20-22, some 1,500 Christians worshipped and heard presentations about the ways they could help wake up the world to God’s saving work. Speakers expounded on the importance of praying, relying on the Holy Spirit, engaging in Wesleyan-style small groups, and multiplying churches. Conference participants also could choose to delve deeper at a breakout session on one of these topics or a session on the Bible called “One Book to Rule Them All.”

That wasn’t the event’s only Lord of the Rings reference. Thomas called the gathering “the fellowship of the frustrated.” “We believe this restlessness is a sign of the Spirit,” he quickly added. “We are frustrated in a holy kind of way. It’s an early indicator of awakening.” The New Room Conference — named for the Methodist movement’s first meeting house in Bristol, England — is an outgrowth of Seedbed, the publishing arm of Asbury Theological Seminary in Wilmore, Kentucky. Since starting in 2014, the event has grown from an initial 250 participants, and has changed venues to accommodate the bigger crowds. This year’s conference was at Church of the City, a nondenominational church in the Nashville suburb of Franklin. Next year, the event will be in a neighboring suburb at Brentwood Baptist Church, which has a bigger auditorium.

The conference focuses on matters of discipleship, not internal church debate. There are no resolutions, no speeches from the floor, and no discussions about church law and human sexuality. J.D. Walt, Seedbed’s founder and “Sower-in-Chief,” told United Methodist News Service, “This is a no-United Methodist angst zone.”

This was the Rev. Beth Ann Cook’s third year to attend. “New Room is the one conference I go to every year that fills me up, that gives me the Holy Spirit overflowing,” said Cook, pastor of First United Methodist Church in Logansport, Indiana. “This is the best drink of cold water I can imagine for someone who’s parched, and that’s why I’m here.” 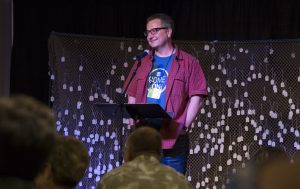 The Rev. Adam Weber, lead pastor of Embrace Church in Sioux Falls, South Dakota, said he was eager to attend after watching the conference streamed online last year. “I grieved and grieved that I wasn’t there myself,” he said. This year, he not only attended but also preached about the “insane privilege to speak with God” in prayer. He is the author of Talking with God: What to Say When You Don’t Know How to Pray. “On my own, I can do so little,” Weber prayed. “But thankfully, you are God who can do so much.”

One main message repeated throughout the event: If you want to be a better disciple, join a band. By that, speakers did not mean the guitar-playing kind. Instead, New Room organizers invited people to join or form the sort of band meetings John Wesley instituted in the early days of the Methodist movement. It was an idea he got from the Moravians. Band meetings — groups of three to six people of the same gender and marital status — focus on confession. The first of five questions at a band get-together is: “What known sins have you committed since our last meeting?”

“The premise is very simple, actually,” the Rev. Scott Kisker told those gathered. “You are going to risk being known in order to risk knowing that you are loved.” Kisker and the Rev. Kevin M. Watson are co-authors of The Band Meeting, and they both spoke about the importance of such groups in their own faith development. Both men are United Methodist elders and professors at United Methodist seminaries — Watson at Candler and Kisker at United.

They explained how the meetings offer an avenue to both repent and experience God’s transforming grace in community. “The band meeting was the engine of holiness in early Methodism,” Watson said. He argued it could serve that purpose again. “When we commit that we are going to show up and do the best that we can to tell the truth,” he said, “there is a way God uses that to bring about deeper and deeper holiness, deeper and deeper healing in people’s lives.”

Throughout the New Room Conference, people who desired to be part of a band could sign up on a net hanging near the front of the auditorium. The net imagery is deliberate, organizers said. The conference is trying to form a network of bands, with at least one such group in every U.S. county.

The conference also announced a new network to support church planters. The goal is not to create a new denomination, the Rev. Timothy Tennent, president of Asbury Theological Seminary, told UMNS. “We are setting up training to help all the traditions in church planting,” he said.

For the Rev. Susan Kent, the whole event was a chance to be spiritually refreshed and see what other churches are doing. “We at our church have been doing awakening,” said Kent, pastor of women’s ministry and worship at The Woodlands United Methodist Church near Houston. “To come and see all the other churches that are being stirred by the Holy Spirit is so beautiful.”